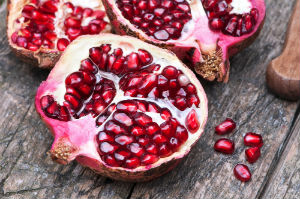 Organic pomegranate seeds or refreshing pomegranate juice is a delicious, refreshing snack! This slightly peculiar fruit has been thought to hold legendary powers for centuries. Persians believe Eve actually ate a pomegranate when she plucked from the tree of knowledge in the Garden of Eden, not an apple. Ancient Egyptians buried their dead with pomegranates because they believed it offered eternal life. This fruit is also featured in mythology and tradition as a symbol of good tidings. Greeks break open a pomegranate at wedding celebrations and the Chinese eat candied pomegranate seeds for good luck. 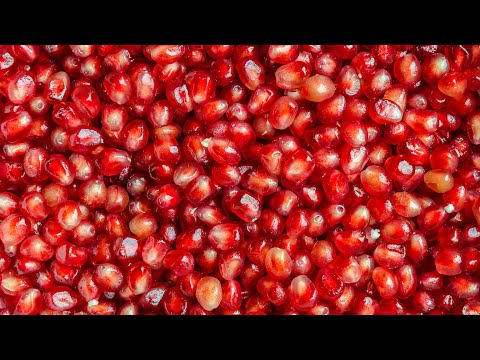 The Health Benefits of Pomegranates

Researchers are discovering the truth surrounding the pomegranate's powers, proving why this exotic fruit has claimed such a fabled place in cultures throughout the ages. Scientists conducting research on the many health benefits of pomegranates have made some incredible discoveries.

First, organic pomegranates are full of antioxidants. These are compounds and enzymes known for keeping low-density lipoprotein (LDL) or "bad" cholesterol from oxidizing and causing atherosclerosis, or hardening of the arteries [1]. Organic pomegranate seeds act a lot like aspirin, keeping blood platelets from sticking together and forming dangerous blood clots. [2]

Punicalagins is a compound found in pomegranates and is responsible for the strong antioxidant activity this fruit carries. A study found that punicalagins promotes a healthy coronary function while counteracting vascular inflammation and oxidative damage. [3]

Antioxidants also buffer the effects of free radical damage to your cells caused by oxidation. Free radicals are produced by functions within the body and elements outside the body, such as radiation from the sun. You can't stop free radical occurrence and oxidation but you can consume foods that help neutralize their potential damage.

Other studies reveal that, over time, organic pomegranates might help combat erectile dysfunction [5]. This super fruit might also reduce the redness of arthritis by slowing the enzymatic activity that breaks down cartilage.

How to Eat an Organic Pomegranate

The pomegranate is an intricate fruit that contains a maze of seeds inside an encapsulation of bark-like, inedible flesh. It may initially look daunting but there is an easy way to get to all those nutritious, sweet and juicy seeds.

To get the most out of an organic pomegranate, eat the seeds while they're at their freshest and juiciest. This is when their therapeutic powers are at their peak!

Some people suck the juice out and spit out the seed. This is a personal choice but most of the beneficial fiber comes from the seed so it is beneficial to eat it and a waste to ignore it. Organic pomegranate seeds are bursting with a delicious, pleasant, slightly acidic flavor that has all the sweetness of cranberries without the tartness.

I suggest sprinkling the seeds on a green salad or a fruit salad. You'll be surprised at the awesome extra taste sensation this provides. You can add them to any recipe that calls for fruit or seeds, too. Pomegranates are often used in Middle Eastern dishes and make a great cranberry-style sauce.

Organic pomegranate seeds are also perfectly delicious eaten all by themselves.

Packed with antioxidants equal to those in green tea and red wine, and especially loaded with vitamin C and potassium, pomegranates are believed to help:

Pomegranates are one of the few fruits where the juice is just as beneficial as the fruit or seeds. The peel, which you can't eat, contains the most antioxidants, and they are released in abundance when the fruit is squeezed for juicing.

Note: Eating pomegranates might interfere with certain medications in the same way that grapefruit juice does. Be sure to ask your doctor or pharmacist about drug interactions.

Pomegranate's wine-red juice will stain your fingers, clothes, and countertops! Be careful with these.