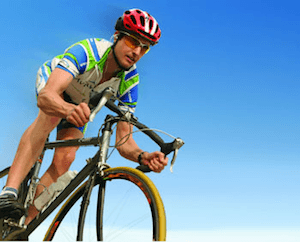 Professional Ironman triathlete, Brendan Brazier, is one of the top athletes in the world. He has gained notoriety as a best-selling author specializing in performance nutrition and further distinguished himself by winning the Canadian 50KM Ultra Marathon Championships on two separate occasions. He has also placed third at the National Long-Course Triathlon Championships and has placed 3rd and 2nd in the Royal Victoria Marathon for two consecutive years. Brazier became a vegan after experimenting with several different types of diets until realizing the vegan plan would enable him to perform at his best!

Think you need to eat half a cow a day to be a body builder? Think again. Professional body builder Robert Cheeke is the President and Founder of Vegan Body builder. He has competed in this sport for many years. In 2005, he won the INBA (International Natural Bodybuilding Association) Northwestern USA Overall Novice Bodybuilding Championship. He has consistently eaten a vegan diet since 1995, and he has been ranked by VegNews as one of the 15 most influential vegan athletes.

Robert Hazely began his career in 1971 as a professional bodybuilder. In 1989, he suffered an injury playing tennis. His friend Dave Howe introduced him to a plant-based diet, and he has been on it ever since. In 2005, Hazely placed 2nd in Mr. Wales, 4th in the British Championship, 3rd in Mr. England, and 6th in World Power Lifting. Also in 2005, he placed 2nd as Mr. Britain. Hazely says the vegan diet improves his ability to train, remain injury free, and maintain high stamina. 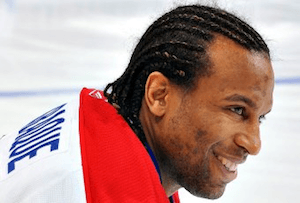 NHL professional hockey player Georges Laraque was awarded the “Best Fighter” award by The Hockey News in 2003. In 2008, Sports Illustrated named him the number one enforcer. While his reputation centers on him being a defensive player, Laraque has also made some notable offensive moves. In 2000, he scored a hat trick against the LA Kings. Laraque has chosen the vegan path primarily for health reasons. Additionally, he has supported a number of animal charities.

Perhaps the most well-known celebrity on our list of top 10 vegan athletes is Carl Lewis, who has been a household name since the 1984 Olympics. During these games, Lewis won 10 medals, 9 of which were gold. Carl Lewis became a vegan in 1990.

Lewis holds 10 World Championship medals, 8 of which are gold. Over the course of his career as a sprinter and a long-jumper, Mr. Lewis achieved top rankings in the 100m and 200m, along with several long-jump events. In 1982, 1983, and 1984 he was Athlete of the Year and holds world records in relays. He now works as an actor, and he has been elected Sportsman of the Century by the International Olympic Committee and also Olympian of the Century by Sports Illustrated Magazine.

Competitive cyclist Jack Lindquist was once an Aerospace student at Penn State and worked briefly in the defense industry. However, the development of weapons technology was distasteful to him, so he took a job as a bike messenger. After a while, he began to compete in cycling events, until he won the Puma Velocity race in New York City in 2007. This earned him world-wide notoriety, and he currently sits on the U.S. National Developmental Team.

Mr. Lindquist became a vegan after talking with friends and fellow competitors about the vegan lifestyle. As a man of compassion, and an avid environmentalist, it was an easy transition for him to make. He particularly credits friends, one who is a registered dietician and one who is a nutritionist, as influential in helping him make the shift.

Mike Mahler, strength coach and kettlebell instructor, has been a vegan since 1997. He has trained MMA fighters such as Frank Shamrock, former UFC light heavyweight champion.

In addition to leading the fields of both strength conditioning and kettlebell lifting, Mahler has also authored several books, including Mahler’s Aggressive Strength Kettlebell Workshop Manual. He has also produced two DVDs, The Kettlebell Solution for Size and Strength and The Kettlebell Solution for Speed and Explosive Strength. He also contributes regularly to Hardcore Muscle Magazine, Ironman, Testosterone Magazine, Vegsource, Exercise Magazine for Men, and Industry Magazine. 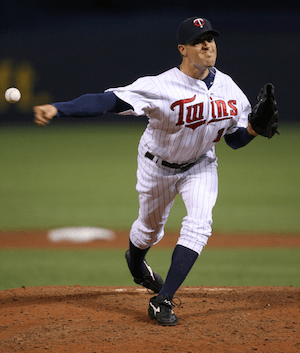 Minnesota Twins relief pitcher Patrick J. Neshek read The China Study in 2007 and subsequently decided to become a vegan himself. He said the book changed his life and motivated him to initially go vegan for health reasons. Since then, he credits the vegan lifestyle for changing his career for the better. Both SportsCenter and Baseball Tonight have noted his delivery, and one of his managers states that Neshek is exceptional in his ability to throw hard from such an angle.

Fiona Oakes is an exceptional individual for two reasons. For one thing, she started practicing the vegan lifestyle very early, in her late teens. She is also exceptional in that she has won many competitions with a knee replacement in place.

In 2007, Ms. Oakes became Essex County Marathon Champion. The record stands to this day, and Ms. Oakes continues to compete in marathons on an international level. She has finished in the top 10 in both Amsterdam and Florence.

Ms. Reister switched to a full vegan diet from a vegetarian diet only 2 years ago. Prior to that, she had been a vegetarian. Ms. Reister immediately noticed an improvement in her energy levels and overall health. Since that time, her accomplishments in fitness, combined with her athletic physique, have been platforms for promoting the vegan path. Her diet is known for being highly structured, with meals every 3 hours consisting of raw, leafy green vegetables and 25g of protein. She also drinks a gallon of water a day.