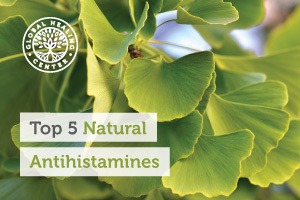 Are you among the many seasonal allergy sufferers each year? Are you tired of the negative side effects many over-the-counter antihistamines provide? Fortunately, there are natural alternatives that can provide relief without inducing drowsiness, dizziness, or headaches – symptoms usually accompanied by most conventional approaches. Most natural antihistamines help to deter symptoms associated with an overactive immune system. They may also help quiet allergy symptoms such as itchy eyes, sinus congestion, and difficulty breathing. Or, they may simply respond to a histamine reaction resulting from exposure to a specific allergen.

There are many natural herbs that display inhibitory properties to histamine. Here are the top 5 herbs which address some of the most common allergy symptoms:

Elderberry is a European folk remedy typically used for supporting health during bouts of the cold and flu. However, there is evidence that the active ingredients in elderberry also support the sinuses by discouraging swelling of the mucous membranes. [1] This benefit makes elderberry an excellent tool for supporting health while combating seasonal allergy symptoms. It naturally protects defenses by keeping bacteria in check, and it has also been used to deter sinusitis and nasal congestion. [2] It is usually found over the counter in health food stores as a liquid syrup.

Eyebright is a flowering herb that has been used to support eye health since the Middle Ages. There is very little scientific evidence to date to support the herb's use as a natural antihistamine; yet, the existing data does provide promising insight into the herb’s powerful benefits. Eyebright contains high levels of antioxidants [3] which may be used to support eye health, and the plant itself has been said to combat dry eyes, allergies, sinusitis, conjunctivitis, and other eye infections. [4] It can be taken as an herbal tea or combined with water and used as an eyewash.

Ginkgo biloba is a Chinese herb that is often associated with mental alertness and memory support. [5] However, it is actually a versatile herb that can be used for a variety of conditions, including glaucoma, bronchitis, asthma, [6] seasonal allergies, [7] tinnitus, and poor blood circulation. Some references also describe ginkgo as a natural antihistamine. It is considered a tonic herb in Ayurveda, meaning it helps restore balance in the body.

Jewelweed has been used for centuries by Native Americans as a natural approach to poison ivy. The allergic response generated by poison ivy is what is known as a histamine reaction. [8] The natural chemical constituents of jewelweed appear to act much like corticosteroids, compounds that inhibit or “block” this histamine reaction. This may also apply to other histamine reactions, such as those that occur with contact dermatitis and bee stings.

Stinging nettle may sound painful, but it’s actually considered a wonderful health-supporting herb. Nettle has natural histamine-blocking properties which are especially beneficial for seasonal allergies. [9] Historically, stinging nettle has been used for sore joints and gout as well as eczema and hay fever. Current research, however, has yet to support this ancient use.