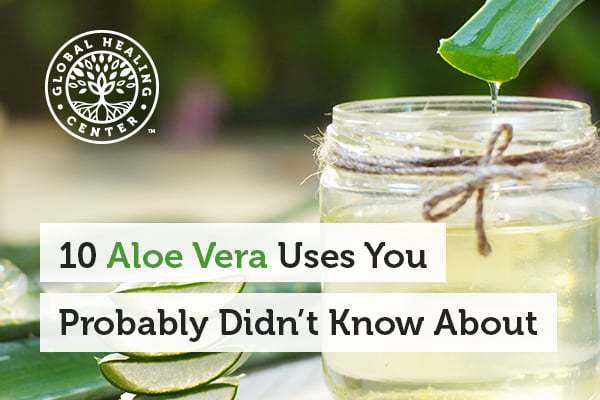 Aloe vera, also known as Aloe barbadensis, has been a staple resource in many cultures around the world for thousands of years. While the plant originated in southern Africa, you can find it growing around the world in places as varied as the Mediterranean and the southern United States.[1] Traditional uses for Aloe vera include soothing burns, moisturizing skin, and helping small wounds heal.

Many nutrients and health benefits are packed into this easy-to-maintain plant — over 200 different biologically active substances.[1] Because of its impressive profile, it’s used in lotions, ointments, creams, sunburn remedies, and many other types of cosmetics. Many people even apply it to acne, and that’s just the tip of the iceberg. Let’s take a look at some uses you may not know about.

Your immune system requires oxygen-rich blood. Aloe vera supports nutrient absorption from the gut; this includes iron absorption. Iron carries oxygen molecules from your lungs around the body, and proper iron absorption helps you maintain proper blood-oxygen levels.[2] Aloe helps you absorb nutrients by keeping the digestive tract clear of debris, by improving bowel regularity. By moving things along, it allows the food you’ve eaten to come into contact with the intestinal lining, thus increasing nutrient exposure and absorption.[3]

Aloe vera also acts as an adaptogen, an herb that helps your body adapt to stress. Aloe is rich in the antioxidants that protect cells from free radical damage.[4] It makes the immune system’s job easier by protecting cells from oxidative stress.[5]

Aloe is a rich source of polysaccharides like acemannan. Research shows these complex sugars improve the immune system's efficiency.[6]

Aloe contains acemannan. Acemannan and other polysaccharides are prebiotics that support probiotics in the gut.[8] When you have these ‘good guys’ in your gut, you’re apt to digest your food better, get more nutritional value from it, and enjoy better overall health. A University of California, Davis study found that people who consumed Aloe vera were able to more efficiently absorb vitamins C and B12.[9]

Common digestive concerns like gas, diarrhea, constipation, and abdominal pain affect a lot of people. If you’re looking for a natural solution to ease your digestive discomfort, then Aloe vera may help. Studies found decreased gas, bloating, and discomfort in those who took Aloe supplements regularly.[10, 11]

Some research suggests Aloe may also help with certain types of intestinal sores. In a clinical trial, patients suffering from the condition were given Aloe vera orally. Fourteen of the thirty patients reported some form of improvement; only four patients in the placebo group reported improvement.[7, 12]

4. Rich in Vitamins and Minerals

Aloe is loaded with vitamins, minerals, and antioxidants, including:

5. Aloe vera Is a Great Source of Nutrients and Enzymes

Aloe vera is often called a superfood because, in addition to vitamins and minerals, it offers more than 200 other bioavailable nutrients. It’s especially rich in the following enzymes that support metabolism, hormone function, digestion, and detoxification:

Aloe vera is ultra-soothing for cuts, sunburns, and scrapes. Whether you use a topical gel, lotion, or just break open a fresh leaf and rubbing it the area of concern, Aloe helps calm red, swollen, and irritated skin. One reason for its soothing properties is an enzyme called bradykinase that soothes agitated tissue.[18]

10. Aloe Vera May Have Anti-Aging Properties

Aloe vera does more than soothe and moisturize. It also offers anti-aging benefits that smooth the appearance of wrinkles from the inside out. In one study, 30 women over the age of 45 took an Aloe vera gel supplement for 90 days. By the end of the study, the appearance of facial wrinkles softened, and their skin looked healthier.[19]

While the benefits of Aloe are impressive, they’re not entirely new to us. We are only rediscovering what our ancestors already knew. Egyptians prized the plant over 6,000 years ago.[20] One of the first mentions of Aloe vera appears in the Papyrus Ebers around B.C. 1550, which shows 12 formulas for using the plant therapeutically. It proved so useful that it was known as the "plant of immortality." People even presented Aloe vera as a burial gift to deceased pharaohs. It is widely believed that Egyptian queens Nefertiti and Cleopatra used it cosmetically.[20, 6]

Egypt was not the only part of the world that found value in the Aloe vera plant. As early as 600 BC, there’s a record of Arab traders bringing Aloe to India — which they called "desert lily." Arabs were already separating the inner gel and sap from the outer rind, and even grinding the leaves into powder. This Aloe powder was highly valued. In fact, records from as early as the 17th century show the East India Trading Company relied heavily on Aloe for its commercial value.

With such amazing historical uses, Aloe vera has earned nicknames from all around the globe — names like the "silent healer", "sabila" "burn plant", "ghai kunwar", "elephant’s gall", "isha irazu," the "medicine plant," and the “first aid plant”. And, while there are many other Aloe species, none are as heavily utilized as Aloe vera.

Today, Aloe vera gel is a common additive in beauty products and used for burns, cuts, and other skin concerns. Many people drink Aloe vera juice for its nutritional value.[21] You can even find edible gels from the inner leaf of the plant in many grocery stores, and it has gained popularity as a smoothie ingredient.

As more and more Aloe products arrive on the market — gels, lotions, creams, juices, and capsules — it’s easier than ever to access the benefits of the plant. When choosing a supplement, always check the ingredients. Some products include fillers and may not contain the nutrients, ingredients, or concentrations you expect.

For a supplement with the full nutritional force of Aloe, I recommend Aloe Fuzion™. It’s a highly bioavailable Aloe vera supplement made from organic inner leaf Aloe vera gel. It contains the most acemannan content of any Aloe product available and the feedback has been outstanding.