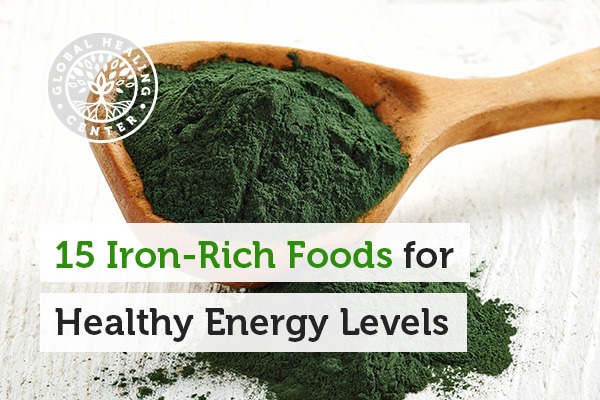 Biologically speaking, iron is a trace mineral and an essential nutrient that your body requires to function properly. It helps with immune function, detoxification, and the creation of several proteins and enzymes.[1] One of these proteins is hemoglobin, a complex protein used by red blood cells to carry oxygen throughout the body.

There are two types of dietary iron — heme and nonheme. Heme iron comes only from animal sources — meat, poultry, and seafood. Plant sources contain only nonheme iron, which isn't as easily absorbed by your body as heme.[3] This may be because certain phytochemicals in plants, including oxalates, polyphenols, tannins, and phytates promote slower, more controlled iron absorption.[4, 5]

Despite this, vegans and vegetarians don't suffer from iron deficiency at any greater rate than meat-eaters do. There may be two reasons for this. First, plant-based diets tend to be high in vitamin C, which acutely increases iron absorption. Second, because vegetables are relatively low in calories and high in nutrients, vegans and vegetarians take in significantly more iron per calorie consumed. In other words, 100 calories of spinach contains as much iron as 1700 calories of steak.[6]

To prevent iron deficiency anemia, it's important to consume the proper amount of iron for your body. Different life stages have different requirements, and women tend to need a little more than men. Consult these charts to find your recommended daily iron intake. Because of the slow, controlled bioavailability of nonheme iron, the U.S. Food and Nutrition Board recommends that vegans and vegetarians consume 1.8 times the RDA for iron.[3, 7]

Some of the most potent plant sources of iron are fortified cereals and flour. However, fortified foods and enriched flour are heavily processed and carry their own health risks.[8] It's always best to get your nutrition from natural sources. Fortunately, there are plenty of plant-based foods that you can incorporate into an iron-rich diet. Here are 15 of the top vegan food sources of iron.

A favorite in green juices and smoothies, spirulina is a blue-green algae rich in protein, vitamins, minerals, and antioxidants.[9] One tablespoon of spirulina contains 2 mg of iron.[10]

The list of health benefits from dark leafy green vegetables seems endless. They contain an abundance of antioxidants, folate, and vitamins A, C, E, and K. Most dark leafy greens also have high iron content.[11] Salad greens, mustard greens, Swiss chard, and bok choy are all excellent choices, but when it comes to iron, spinach brings the muscle. One cup of cooked spinach contains over 6 mg of the mineral.[12]

Beans are an excellent source of iron, though the exact content varies by type. White beans have one of the highest iron concentrations with almost 8 mg per cooked cup. One cup of cooked lentils provides 6.6 mg of iron, and the same quantity of kidney beans or chickpeas nets you about 5 mg. Other iron-rich beans include cowpeas, lima beans, and navy beans.[12]

They belong to the same family of legumes as beans, so it's no surprise that green peas are a respectable source of iron — 2.5 grams per cooked cup.[13]

Some nuts have a relatively high iron content, including almonds and cashews. These popular nuts contain between 1 and 1.16 mg of iron per ounce, which gives you 6 to 9 percent of the recommended daily allowance.

Nuts also have high fiber content, as well as healthy fats, antioxidants, and phytonutrients.[14] Other iron-rich nuts include pine nuts and macadamias. Add a few raw nuts to your salad or have a handful for a snack! Roasting may change the nutrient profile.[15] The phytase and polyphenols in some nuts may inhibit iron absorption, so make sure to get enough iron, and from diverse sources.[16]

Sesame seeds are a boon to both heart health and overall wellness. They're a natural source of several potent antioxidants, containing vitamin E, flavonoids, and lignans, particularly sesamin and sesamolin.[17] These phytochemicals provide many health benefits. Sesame seeds are also a great source of iron. Just one ounce of the seeds contains 4.18 mg.[18]

Fruit is a very good source of iron. Dried fruit may be even better, as it concentrates the nutrients in a small, non-perishable package. A half cup of dried fruit has the same nutrients as a cup of fresh fruit. Just make sure that you choose dried fruit with no added sugar. Some fruits sold as "dried" are actually "candied," which means they were heated in a sugary syrup. Avoid "dried" dates, pineapple, and cherries for this reason. Good choices include apricots, raisins, and prunes. Ten dried apricot halves contain 2 mg of iron while five prunes have 1.2 mg. One-half cup of raisins has 3 mg of the trace mineral.[19]

Good news! Dark chocolate has a wonderfully high iron content. Per ounce, dark chocolate has a higher iron density than steak. One 100 gram bar of 70 to 85 percent cacao chocolate contains 12 mg of iron. Unfortunately, this isn't a free pass to eat all the chocolate you want. Eat dark chocolate in moderation, but when that irresistible sweet tooth hits, you could do a lot worse.[20]

Already a favorite autumnal treat, there are good reasons to start eating pumpkin seeds year-round. Also known as pepitas, one ounce of pumpkin seeds contain 4.2 mg of iron.[12] They're also a concentrated source of zinc, magnesium, and fatty acids.[21]

Though classified as a whole grain, quinoa is technically a seed. While South Americans have been cultivating the plant for almost 5000 years, quinoa has seen a surge in popularity amongst North American health enthusiasts in the last several years, and it's not hard to see why. The seed is gluten-free and rich in protein, manganese, phosphorus, magnesium, folate, and thiamine (vitamin B1).[22] And let's not forget iron! A cup of cooked quinoa contains almost 3 mg of iron.[23]

Refined grains use only the endosperm of a grain. This improves shelf life but robs the grain of many nutrients, including iron. Whole grains contain the entire grain kernel — bran, germ, and endosperm. Because of this, whole grains retain a much higher nutritional value. Brown rice, oats, and barley are all excellent choices for iron.[24]

While many people consider dandelions a nuisance, dandelion greens make a healthy addition to any salad. One hundred grams of raw dandelion greens contain 3 mg of iron. They're also very high in vitamin C, which makes the iron they contain all the more absorbable.[25]

Coconut water and coconut oil are enjoying an all-time high in popularity right now, but what about coconut meat? Raw coconut meat packs in about 2.5 mg of iron per 100 grams. That's around 10 mg for a whole coconut.[26] Try it with a little lime and chili for a tart and spicy treat.

Curry leaves are a wonderful staple of Indian cooking and feature a high iron content. When used as a spice, curry is not consumed in large enough quantities to add a significant iron boost. However, curry leaf extracts are frequently used in high-quality, natural, vegan iron supplements.[27] But don't let that stop you from adding curry leaves to your cooking. Curry leaves, like most spices, also contain a wealth of other beneficial phytonutrients.

Blackstrap molasses is a thick, dark syrup created as a byproduct of extracting sugar from sugar cane. While refined sugar has been completely stripped of its nutritional content, blackstrap molasses retains all the vitamins and nutrients found in the original plant. Basically, molasses is all the nutritional content that was stripped from refined sugar. If you can, choose organic.

Because of this, blackstrap molasses has a very high nutrient density. Just one tablespoon contains anywhere from 3.5 to an astonishing 12.6 mg of iron — twice as much as a steak! It's also a significant source of vitamin B-6, calcium, magnesium, manganese, and potassium.[12, 28, 29]

For most people, a diet that includes plenty food-derived iron should be sufficient to prevent iron deficiency. In certain cases, such as absorption issues or pregnancy, iron supplements may be the key to maintaining healthy iron levels. Do your research and look for natural supplements, as the synthetic versions lack the co-nutrients that let our bodies process and absorb the vital constituents of your food. You may want to find a supplement in pill form since liquid iron supplements can stain teeth.[30]