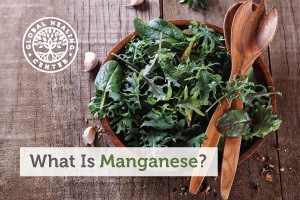 Many people know that vitamin B12 supports normal energy levels and that vitamin C can help the immune system, but what do you know about manganese? It doesn’t have the star power of other nutrients like calcium, iron, or potassium, but it’s still essential and vital to your health. Manganese, which is stored in the bones, kidneys, and pancreas, is a trace mineral, meaning your body needs very small amounts of it, but that doesn’t make it any less important. Rather, the human body requires it for many important functions.[1]

How Much Manganese Do I Need?

The recommended dietary allowance for manganese has not been established but the adequate intake levels are as follows:[2]

Manganese supports normal health in several ways. It is a cofactor that helps enzymes carry out their functions in the body. Manganese is essential for the metabolization of cholesterol, carbohydrates, and protein. As a component of the antioxidant enzyme superoxide dismutase (SOD), it helps combat the damaging effects of free radicals by converting superoxide, a metabolic byproduct, into safer molecules that won’t cause cellular damage.[1]

There may also be a relationship between manganese and blood sugar. Studies have revealed that diabetes patients have low levels of manganese in their blood, but researchers have not been able to figure out whether diabetes causes manganese levels to drop or if inadequate manganese contributes to the development of diabetes.[1]

Manganese is essential for bone health.[2] When combined with the right amounts of calcium, zinc, and copper, manganese encourages normal bone density, especially in the spine and legs.[3] This is particularly important for older adults who are at risk for osteoporosis, especially postmenopausal women. Fifty percent of postmenopausal women, and about 25% of men will suffer an osteoporosis-related break.[4]

There’s also evidence to suggest that manganese, when taken with glucosamine and chondroitin, may reduce osteoarthritis pain. In one study, 52% of the test population who took the combination reported improvement. Unfortunately, this benefit only seems to extend to those with mild osteoarthritis. No significant reduction was noted in persons suffering from severe osteoarthritis.[5]

Although true manganese deficiency is uncommon, experts estimate that as many as 37% of Americans do not get the recommended amount of manganese in their diet.[6]

Studies have shown that inadequate manganese intake is associated with chronic diseases such as diabetes, osteoporosis, and epilepsy.[1] Because manganese is necessary for normal skeletal development, low levels may contribute to skeletal and postural abnormalities.[7]

Clinical studies suggest that people who suffer from seizure disorders have lower levels of manganese in their blood and hair.[8]

While the body requires manganese to function properly, excessive amounts can cause manganese toxicity. The following reflect the tolerable upper intake levels for humans:

As the saying goes, “The dose makes the poison.” Even though it is essential in trace amounts, manganese is considered a heavy metal. In fact, zinc, copper, selenium, and iron are all nutrients that are also heavy metals. Too much of any of them, including manganese, can negatively affect health, especially brain health.[7]

Excess manganese is stored in brain tissue. If it reaches toxic levels, neural impairment and the neurodegenerative disorder manganism can result. Manganism, which has symptoms similar to Parkinson’s disease, occurs when manganese accumulates in the basal ganglia.[9]

Children are especially vulnerable to manganese toxicity (and heavy metal toxicity in general). Excess manganese negatively affects brain development, behavior, learning ability, and memory.[7] In one documented instance, a young boy with high levels of manganese experienced concerns with verbal and visual memory, learning index, and general memory to such an extent that, among his peers, his test scores were in the lowest percentile.[10]

What’s the Best Source of Manganese?

A balanced diet comprised of whole, real, organic food is the best source for the complete spectrum of nutrients required by the body, manganese included. There are plenty of common foods that are a good source of manganese, such as nuts, legumes, seeds, tea, whole grains, and leafy green vegetables.[1] There is the usual caveat, however, that manganese content, as with all nutrients, can vary based on the soil and region where it was grown.[11]

If your diet doesn’t provide enough manganese or other important nutrients, a multivitamin can help fill the gaps. Manganese is available as a standalone supplement but it’s best to consume manganese with the associated nutrients — like zinc, calcium, and copper — that all work together.

Drucker Labs produces a line of liquid, plant-sourced multivitamins that are easily absorbed and highly bioavailable. For adults, intraMAX® 2.0 contains 415 vital nutrients, including 71 carbon-bound minerals such as manganese. Formulated to meet the unique nutritional needs of children 4 and above, IntraKID® provides 215 vitamins, minerals, and nutrients and the liquid formula is easier to swallow than tablets; the raspberry flavor tastes better than chewable multivitamins.