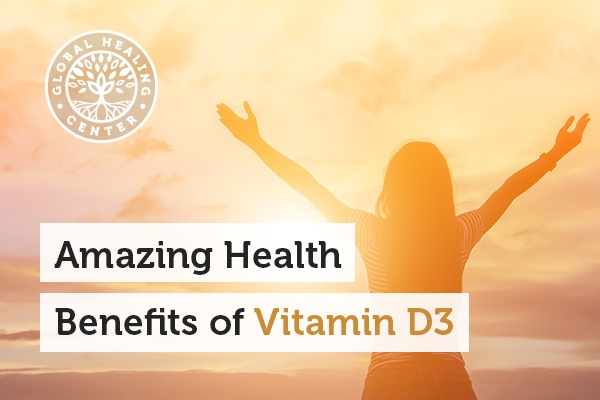 Conversations on the benefits of vitamin D have taken the health industry by storm. A goldmine of pioneering studies around the turn of the 21st century on vitamin D have reported incredible findings about the “Sunshine Vitamin” and its positive effects on bone health, the immune system, and good health in general.

There are many benefits to vitamin D and it's virtually impossible to list them all in one post but here are a few of the more important health benefits of vitamin D3, all of which have seen an extensive amount of study.

1. Nutrition for Your Brain

Getting enough vitamin D is important for your neurological health and promising research has been building over the last few years around the correlation between Alzheimer's disease and vitamin D deficiency. There are over 35 million Alzheimer's sufferers worldwide. Over 5 million of those are in America, and that number is expected to explode to 15 million by 2050. [1] It's not to say that a vitamin D supplement will prevent Alzheimer's but considering that around 90% of Alzheimer’s disease patients have low levels of vitamin D, researchers are examining the role of this nutrient.

A recent study showed the effects of vitamin D on Alzheimer’s occurrence in elderly women. The study demonstrated that the group with the highest intake of Vitamin D (20% of the participants) experienced lower Alzheimer's disease incidence. [2] Another study focused on 300 elderly people showed a profound 250% increase in occurrence of Alzheimer's cases in people with low blood levels of Vitamin D. [3]

Autoimmune disorders have increased dramatically in recent decades, and within that time a little over 80 types of autoimmune diseases have been classified. Vitamin D is a potent immune system modulator and autoimmune disease describe a condition in which the body and its immune system (white blood cells, killer T cells, etc.) are stimulated and/or tricked into attacking healthy bodily tissues/organs, a process that doesn’t occur under normal circumstances. Adult women regularly consuming a multivitamin with just 400 IU/day of Vitamin D in one study had a 40% reduced risk of developing rheumatoid arthritis (RA). Another study showed high ­dose Vitamin D supplementation resulted in RA symptom improvements in an astonishing 89% of patients and 45% of patients obtaining complete remission. In this instance, it appears that adequate vitamin D was very beneficial to joint health. [4]

The cold and flu are two of the most common illnesses that have plagued humanity for centuries, and we still haven’t been able to figure out how to beat them. While potentially dangerous in a small subset of people, they are generally seen as a nuisance more so than a fatal disease. Usually, illness occurs when the immune system – our main line of defense – isn’t functioning properly.

Looking at 31 previous years of statistics on flu activity and the highest months of flu contraction in the United States, December through March are the peak months of activity (February being the most active month). UVB rays from the sun are, for the most part, muted throughout the winter months in most of North America, hence little to no Vitamin D production among the populations.

We are all at risk to be deficient of this crucial element and should be aware of the role vitamin D plays as a nutritional supplement. I recommend supplementing with vitamin D3, the most bioavailable form of vitamin D. Suntrex® D3 contains a revolutionary type of D3 known as cholecalciferol that's naturally derived from lichen.