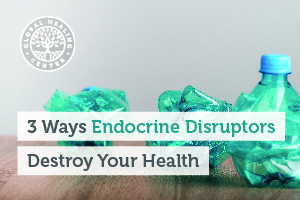 Your endocrine system is your main hormone regulator and endocrine disruptors are chemicals that throw it out of whack. Chemicals like BPA and phthalates are infiltrating our lives at an ever increasing rate. [1] [2] Considering that hormones control everything from metabolism to sleep, protecting it from disruption should be a top priority.

Endocrine disruptors are commonly found in personal items, medicines, and cleaning products. Believed to be especially harmful to male reproductive health, these chemicals are linked to testicular cancer, male infertility, and even genital deformities. That same sunscreen you use for protection from the sun’s harmful rays might be one of the sources of disruptors that could be causing some unexpected issues. [3] [4] A recent study found a chemical in sunblock has been linked to infertility in men, and another noted that phthalates in toys cause many of the same issues. [5] It’s not just men who are at risk from endocrine disruptors. Evidence shows women are also in danger, and can even have a shorter reproductive lifespan. [6] [7]

While BPA is a known endocrine disruptor, a recent study showed that BPA-free plastics might be just as bad. Some BPA-free resins have been found to contain estrogen-like compounds. [8] These resins are used in plastic production and substituted for BPA. Keep your eyes open for phthalates and parabens, too, two endocrine disruptors commonly found in personal hygiene products that are known to cause hormonal imbalances. [9]

Perchlorate is an endocrine disruptor found in rocket fuel, fertilizers, and fireworks. It’s even been found in 4 percent of large US water supplies – mainly those near military bases or defense compounds. A recent study suggested that prenatal exposure could affect a child’s IQ. [10] This isn't the first time the finger has been pointed at perchlorate. Perchlorate exposure is known to affect thyroid function in women by stopping the necessary transport of iodine – perhaps this is how the lower IQ happens. [11]

Is There Any Hope?

There is an effort in the European Union (EU) to ban endocrine disruptors, but it’s slow going. [12] Billion-dollar corporations, more concerned with profits are throwing up roadblocks. After all, a European ban on toxic chemicals would mean many products sold would need to be reformulated. [13] I think, though, as long as at least one government is trying to change this issue, there’s hope – if only a glimmer.