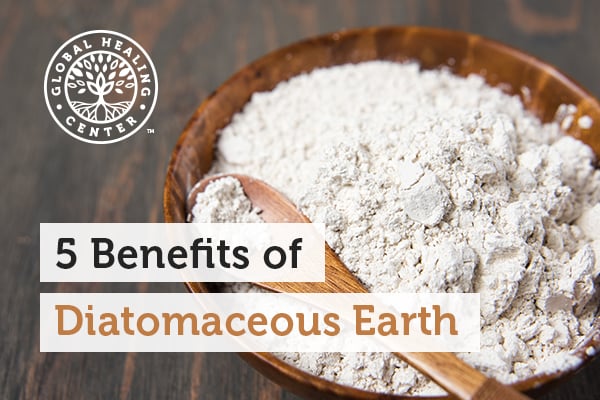 Diatomaceous earth is a naturally formed, sedimentary mineral rock. It's derived from the remains of diatoms — oceanic unicellular algae.[1] Diatoms are over 30 million years old, and they're formed from the cementation of microscopic, algae-like plant remains into the earth's surface. These chalky, clay-like remains are usually found in the form of a thick, white, siliceous powder known as diatomaceous earth.[2] Often used to support body cleansing, some research suggests that diatomaceous earth is a natural tool for promoting normal blood lipids, detoxing heavy metals, and eliminating harmful organisms that target the digestive system.

The use of diatomaceous earth knows no bounds. It has many applications in cosmetic, agricultural, and cleansing realms. It's been investigated extensively, and some interesting benefits have been discovered.

Food-grade diatomaceous earth is approximately 85 percent silica.[3] This important trace mineral is required by tendons, cartilage, blood vessels, and bones.[4] The nutrient contributes to almost every vital organ, including the heart, liver, and lungs. Food was the primary source of naturally occurring silica before modern farming practices depleted the soil. It is suggested that only a third of the silica we require is available in natural, plant-based foods.

Because diatomaceous earth is a strong abrasive, it is used as a facial exfoliator. The process of exfoliation is important in skincare as it helps to remove dead skin cells that may give the appearance of tired, worn-out skin. It's sometimes described as an effective beauty mineral because its natural silica content supports healthy skin, hair, and nails.

Research shows that food-grade diatomaceous may offer positive benefits for cholesterol levels while encouraging heart health.[5] Nutrients such as calcium, sodium, magnesium, iron, and other trace minerals are available in diatomaceous earth, giving rise to a practically endless supply of health benefits. Most of these nutrients play a role in facilitating cardiovascular health.

One of the most common uses for diatomaceous earth is as a natural pesticide. Studies indicate that this clay-like powder can kill the insects that threaten crops and disrupt home life.[6] Due to the heavy use of harsh chemical pesticides, many insects have become resistant. This organic pest control method provides a new strategy while helping to reduce the environmental toxins to which we're all exposed.

Diatomaceous earth is available in supplement form, both by itself and combined with other complementary ingredients. If you’re looking for a cleansing formula, try Paratrex®. It's made with diatomaceous earth and natural herbs to help remove a range of organisms from your body.