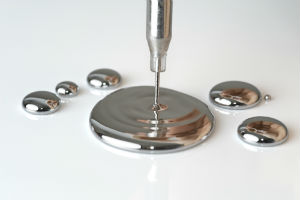 In a short period of time, we've come a long way in understanding and recognizing the health dangers of mercury. It wasn't but just a generation or two ago that nearly every kid in school played with mercury in science class. Now, fortunately, we understand its danger and are a little less flagrant... but not completely. Mercury continues to be a serious health danger; let's take a look at five scary truths about mercury.

1. Mercury is Toxic to the Brain

There's absolutely no question about it and even the EPA and CDC agree – mercury damages the human brain. The research clearly shows that mercury exposure negatively affects short- and long-term memory, spatial reasoning, and attention. [1] It's even been linked to dementia and Alzheimer’s disease. [2] [3] [4] If you value your mental abilities, you need to avoid mercury. But, that can be tough since...

Mercury is as common to the manufacturing industry as water is to the ocean. Just because we're aware of its damaging effects doesn't mean its use has been discontinued, not at all. Batteries, fluorescent and CFL light bulbs, and LCDs, just to name a scant few, all contain mercury. It's a pollutant that's completely overtaken the environment. In fact, recent research has discovered two-and-a-half times more mercury in the environment than previously thought. [5] Unfortunately, the sources are many – mining, latex paint, the manufacturing of vinyl and plastics, even dental fillings! [6] Do you see the vastness of this concern?

3. Mercury Has Polluted Our Waterways

You'd have to be living under a rock to be unaware that mercury has totally contaminated seafood. This is not a concern without consequence. Recently, in Minnesota, state health officials reported 1 in 100 infants had mercury levels high enough to cause brain damage. [7] And, a test of residents in Michigan found those who consumed locally-caught fish had higher than average levels of mercury. [8] It's an absolute disgrace.

4. Dentists Are Part of the Concern

If you've gotten a tooth filled, there's a chance you've got mercury in your head. According to the EPA, 120,000 dental offices in the United States use mercury in amalgam fillings. [9] What's worse is that nearly all of these offices dump contaminated waste water into the public water supply. [10] What's really tragic is how preventable it is, and only 40-50% of the dentists in the US use amalgam separators – the rest are knowingly and foolishly releasing mercury into the water supply.

5. Goods Made in China May Contain Mercury

In 1999, China accounted for 28% of the world’s mercury pollution; currently, China produces about 75% of the world’s mercury. [11] [12] In an area called Wanshan, mercury pollution has reached 278.5 mg of mercury per kilogram of soil. To put this into perspective, the standard, acceptable level is 1.5 mg per kilogram. [13] The Chinese government claims to have taken steps to address the excessive pollution; however, with mercury pollution rampant throughout China, you may want to think twice about buying and consuming any products (especially food and nutritional supplements) from China... before the mercury overtakes your brain and your ability to think, that is.

The human body is great at naturally cleansing itself and keeping up with environmental toxins, but mercury is a real devastator. It's exceptionally damaging to the brain and, since it drains glutathione levels, the liver, too. Drink purified water, avoid vaccinations that contain mercury, eat a diet that supports your liver and brain health, and educate yourself about the hidden sources of mercury.