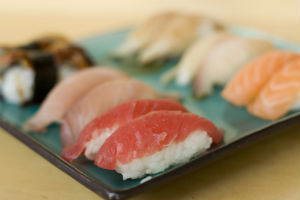 Recently, officials from the Environmental Protection Agency and the Food and Drug Administration issued new recommendations regarding seafood consumption limits for women who are pregnant or nursing. This release marks the first update on recommended fish consumption since 2004. In this update, recommendations were made in regards to the minimum amount of low-mercury fish a pregnant woman should eat. Past recommendations were non-specific and only recommended a maximum amount. Recommendations from these organizations often based their guidelines on the fact that most fish can be a prime source of dietary mercury and other contaminants which may harm the developing fetus.

The new report officially advises pregnant and breastfeeding women to eat at least eight ounces — and no more than 12 ounces — of low-mercury fish each week. It also recommends that young children should consume three to six ounces of low-mercury fish per week. [1] This report marks the first time the EPA and FDA have made recommendations regarding a minimum level of fish consumption for expectant mothers. Previous reports included only recommendations for maximum levels. In the past, officials advised pregnant women to avoid mercury because of its effects on brain development and a child’s nervous system. In a developing fetus, too much mercury consumption can cause irreversible brain and neurological damage. As the EPA’s acting assistant administrator for the Office of Water, Nancy Stoner pointed out that we now understand that "Eating fish with lower levels of mercury provides numerous health and dietary benefits." These benefits include improving fetal brain development and increasing IQs in children. In addition, fish are excellent sources of high-quality protein and they contain high amounts of omega-3 fatty acids and key vitamins and minerals.

Which Fish to Consume

According to the National Resources Defense Council, fish with the lowest levels of mercury include:

When it comes to the four high-mercury fish that pregnant and nursing women should avoid, the new report is exactly in line with the report from 2004. [2] Fish with the highest levels of mercury include:

Since new and expectant mothers want nothing more than to ensure the health of their children, it’s vital that they receive accurate information for their own nutritional needs as well as those of their children. In my opinion, it's better for mothers to avoid fish altogether, instead opting for mercury-free omega-3 options, like chia seed, flaxseed, and walnuts.