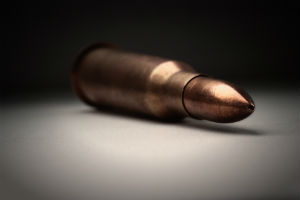 Despite having been banned from household paints since 1978, lead exposure remains a serious issue, and lead bullets are a major contributor. The concern with lead bullets is that they can fragment upon firing and impact. This results in lead dust that can contaminate the environment and meat, in the case of hunting. Let's take a closer look at the concern of lead bullets and how they contribute to lead exposure and poisoning.

This isn't a commentary about the rightness or wrongness of firearms – that's an entirely different subject. What I do want to talk about though are the health effects of lead bullets and, more specifically, the lead dust they leave behind. Recent studies have identified many health dangers of lead ammunition — for those who use it and those nearby.

Indoor gun ranges are a prime spot for lead dust to linger and in these places, inhalation of lead dust is a serious concern. A recently published study linked target shooting at gun ranges to 2,673 cases of elevated blood lead levels.[1] Another study found that recreational shooting accounted for the most common, non-occupational lead exposure.[2] You'd think that it would be standard for all ranges to have the most cutting edge air purification devices available but investigative reports revealed that not all gun ranges put adequate ventilation systems in place to protect their employees or customers. If you walk into a range and there’s a haze in the air, it’s probably not a safe environment.

Don't think that you become free from lead dust when you exit the shooting range. Lead dust settles on clothing, skin, or other items and comes home with you to harm your family. In one instance, construction workers who were renovating a gun range were found to have elevated lead dust in their homes. Once symptoms of nerve and neurological damage became apparent in one of the workers, doctors tested his entire family. The workers’ children showed excessive blood lead levels.[3]

A similar study found that ammunition was one of the major sources of lead exposure for Inuit families.[4] Factors affecting the degree of exposure included whether lead dust was brought into the house and how well the firearms were maintained and cleaned.[5]

The obvious solution to the accumulation of lead dust in an enclosed space is to just shoot outside, right? Well, not quite. Outdoor ranges are also prone to accumulating spent lead and lead dust. One example is the Chattanooga-Hamilton police firing range. After years of use, the ground surface contains far more than the 400 mg/kg limit for lead in soil. Although the lead hasn’t seeped into the groundwater supply (yet), surface water may carry the lead on the ground’s surface into the Tennessee River.[6]

Recent studies find that animals such as Bald Eagles are dying from lead poisoning and have higher lead levels during hunting season than any other time of year. Apparently, they are encountering lead through the remnants of bullets left behind in unclaimed animal remains.[7] This leftover lead can also be a concern for people in the form of contaminated meat brought back from the hunt.

Are Copper Bullets the Answer?

The dangers associated with lead have inspired some ammunition companies to look for safer alternatives, and some ammunition companies have begun producing copper bullets. They hold together better and they don’t leave behind a toxic residue. The downside is that copper bullets are more expensive, and they require greater accuracy as they will pass through a target without shattering. But, they are a more safe and environmentally-friendly option.