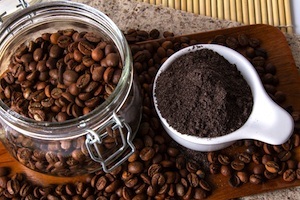 Coffee is one of the most consumed beverages in the world. It’s grown in over 70 countries and amounts to over 16 billion pounds of beans every year. That’s a lot of beans… and when they’re only used once and thrown away, it also amounts to a huge amount of waste.

If you drink a lot of coffee or have worked in a coffee house, you have probably looked at the massive amount of coffee grounds being thrown away after one use and wondered, “isn’t there something these can be used for?” You’re not alone, researchers all over the world have wondered the same thing and explored the issue. The good news – spent coffee grounds DO have value! What potential uses for used coffee grounds have been found?

How to Use Spent Coffee Grounds

Researchers at Japan's Kinki University investigated the possibility of using coffee grounds to remove lead from drinking water and found that, indeed, not only was it possible, but that it actually worked quite well. [1] The prospect of using coffee grounds, an overly abundant waste item, for a purpose as beneficial as removing lead from drinking water is an exciting idea!

You may have heard of diesel vehicles being converted to run on discarded grease from fast food restaurants, wouldn't it be great if discarded coffee grounds could also be used as a source of energy? Perhaps they can.

Researchers at the University of Nevada in Reno found that oil extracted from spent coffee grounds could be converted to biodiesel. Spent coffee grounds can contain about 15% oil, depending on the variety. This might not sound like much, but experts estimated that the biodiesel production levels could reach upwards of 340 million gallons when accounting for all the used coffee grounds in the world. As a side bonus, they also determined that even after the oil is extracted, the coffee grounds are still great for garden fertilizer, feedstock for ethanol, and fuel pellets. [2]

Additionally, the Research Institute of Industrial Science and Technology in South Korea conducted similar experiments and found that spent coffee grounds were a strong candidate for the production of bioethanol and biodiesel. [3]

A 2008 study out of Malaysia found that when coffee grounds were added to vermicompost – composting that uses worms – it helped produce more earthworms than kitchen waste alone. This is, at least partially, because the coffee grounds increased the nutrient content in the vermicompost. [4] This is an easy one for anyone to partake in. If you’re not composting, start composting. And if you are already, make sure to throw your coffee grounds in the mix!

It’s fairly common for home gardeners to add used coffee grounds to garden soil. I had a friend who would routinely dump the remnants of his French press right into his plant pots. Old wives tale? Not quite, research suggests it's an idea with merit.

In early 2012, Portuguese researchers examined the impact of adding spent coffee grounds to growing lettuce. The results were astounding – the carotenoid and chlorophyll content in the lettuce increased, as did the amount of lutein and beta-carotene. There is a ceiling, however, as they also determined that a 10% limit on the ratio of coffee grounds to soil was where the benefits stopped. [5]

In Japan, the National Institute of Vegetable and Tea Science has published information recommending that spent coffee grounds be added to rice farming so as to increase rice yields and the nutrient content (as well as decrease landfill waste). [6]

5. Source of Antioxidants and Other Nutrients

In fact, research conducted at Spain's University of Navarra found that spent coffee grounds actually contained up to seven times the amount of beneficial antioxidants than the respective brewed coffee! [8]