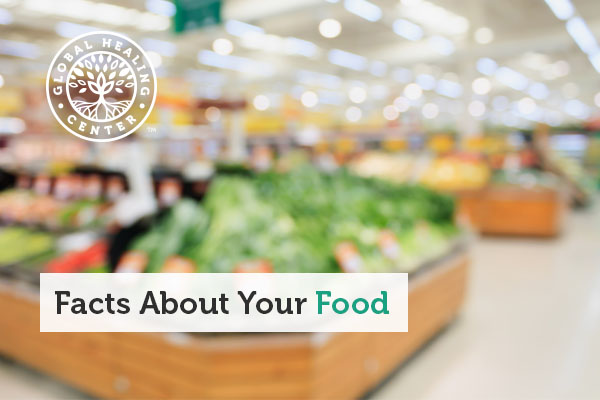 It’s dinnertime and you’re hungry. Following your internal cues, you decide to swing by the grocery store on your way home from work. That’s fine; after all, everyone has to eat. Nevertheless, do you really know the truth about that food you’re going to buy? If you take a closer look at the ingredients of your common foods, including staples, you may be surprised by what you find. These 7 unsettling facts about your food may make you look at grocery shopping in a totally different light.

Facts about Your Food You Need to Know

Your food should be one of the safest, most consistent aspects of your life. It provides sustenance and satiation, and you should always be able to count on it for supporting your health and wellbeing. Unfortunately, this isn’t always the case. Many non-organic foods – including non-organic whole foods – may be dripping with untold health concerns. Here are some facts you should know about the food you may be eating.

1. Your Favorite Fish Is Probably Farmed

Global fish consumption is at such a high that natural populations have been dramatically depleted. This means much of the demand is — you guessed it — supplemented by farm-raised fish. In 2012, over 40 percent of global fish output was raised in captivity! Most shrimp production — 56 percent — comes from farms in Southeast Asia and China, and 99 percent of Atlantic salmon is farmed. [1] Why is this problematic? Well, there’s the concern that you might not have known your fish was raised in captivity, but there’s also the very startling fact that many of these fish are essentially raised in very tight, perhaps dirty quarters. This makes them smaller than their wild counterparts as well as prone to injuries and illness.

2. Organized Crime is Getting Involved

Recently we’ve heard reports of food recalled due to improper labeling. Remember the IKEA Swedish meatballs incident? It’s not always about meat not being accurately labeled; sometimes it can be even scarier. Take the recent case of a criminal gang in China that sold almost 100 tons of tainted tofu to local markets. [2] The gang used an illegal bleaching agent to make the tofu sticks brighter and chewier. Banned from food production, the industrial toxin Rongalite – the ingredient used by the gang – has been linked to cancer. That’s definitely not something I want in my food.

3. Arsenic May Be in Your Rice

A study from the Institute for Global Food Security at Queen’s University in Belfast tested 81 different UK food products. Many of the products were food items sold specifically for babies and children. The study found that over half of the rice products exceeded limits of arsenic for children. Long-term exposure to inorganic arsenic — the kind in the products — can lead to cancer or heart disease. [3] Another study from Consumer Reports found that inorganic arsenic, which is the most toxic kind, can also get into water and soil — and thus, rice — from lead-arsenate insecticides. These were banned from the US in the 80s, but residue still lingers. [4]

4. Moldy Feces: It May Be Covering Your Food

The Natural Resources Defense Council recently posted over 300 pages of USDA reports revealing pretty disgusting conditions at two Foster Farms plants in California. [5] These are the same factories linked to an antibiotic-resistant salmonella outbreak, but that’s just the tip of the iceberg. Mold growth and fecal matter on chicken carcasses were highly noted in the reports. [6] The Council also revealed over 500 violations at other national Fosters Farms. The good news is these factories have made vast improvements in the eyes of the USDA and CDC. Still, can we ever really be sure what we’re consuming, especially if the food isn’t certified organic?

5. You May be Unknowingly Consuming Antibiotics

More and more farmers are using antibiotics in animals, despite the disastrous health effects of the medicines. The FDA released a report detailing how the rate has climbed 16 percent in three years. [7] Farmers have long used antibiotics to prevent illness. Due to the deplorable living conditions at conventional factory farms, many animals have weak immune systems and often require medicine to keep them in mediocre health. More often than not, animals given antibiotics show no signs of sickness upon administration. A 2013 policy was supposed to curb this practice, but still over 97 percent of antibiotics are given to animals and sold to farmers without a prescription.

6. Do You Buy Strawberries? You May be Consuming a Host of Pesticides

Most of us think strawberries are pretty tasty and healthy, but did you know they’re actually farmed with toxic pesticides? When you fumigate something, you put fumigants into the environment. In the case of non-organic strawberries, fumigants kill off any diseases, weeds, and pests before they become a concern. Unfortunately, following application you’re left with a toxic gas lingering in the air. To put it in perspective, California strawberries take up 1 percent of the state’s farmland but fumigants make up about 8 percent of the state’s pesticide use. [8] About 88 percent of the nation’s strawberries are farmed in California. [9] Perhaps even more worrisome are the health and environmental effects of fumigants, including cancer, developmental concerns, and ozone depletion.