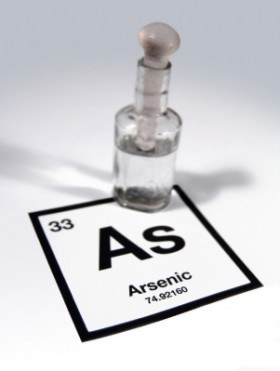 Arsenic is an element that is extremely toxic to human health. Arsenic poisoning or arsenicosis occurs when someone is exposed to high levels of arsenic, typically by unknowingly ingesting it. Although uncommon, poisoning can occur by inhalation or through dermal absorption. [1] Despite this, or maybe because of it, humans have used arsenic in many capacities- as an insecticide, as a toxic agent of war, and even as a wood preservation. However, its use in countless industrial applications has contributed to pollution at all levels. Additionally, arsenic exists naturally in the environment. The combination of these factors means that the most common method of exposure occurs by drinking contaminated water.

Pollution has made groundwater contamination of arsenic a worldwide concern that affects people, crops, and livestock. [2] In 2012, the University of Washington School of Law published information that brought light to the fact that many water systems in the United States are affected by unacceptably high arsenic levels and money is not available to address the concern. Poor communities were identified to be the highest at risk. [3]

Arsenic laced water becomes a compound concern when crops and livestock are given that water. "You are what you eat" or, "you are what you consume" applies to animals and plants just as much as it does humans. When the University of Washington analyzed over 30 types of apple juice, they found arsenic in all samples and over 30% contained arsenic levels at or above drinking water exposure limits. [4] Rice is eaten by the vast majority of the world's population and, like many crops, can become contaminated with arsenic. [5] This concern is not limited to China or India as "organic brown rice syrup" (OBRS) is a popular "organic" alternative to high-fructose corn syrup. The Dartmouth College Department of Earth Sciences tested products that contained OBRS and the results were as disappointing as arsenic is toxic. Researchers discovered that an "organic" toddler milk formula (with OBRS as the primary ingredient) had arsenic levels over five times higher than the levels the EPA deems acceptable for water. Additionally, cereal and energy bars containing OBRS had higher arsenic levels than products without. Beware and watch out for this stuff yourself! The United States currently has no regulations governing arsenic in food, the need for change is both urgent and dire. [6]

If you take nutritional or herbal supplements, it is vitally important that you only do business with reputable manufacturers whose production process is completely transparent, ethical, and bio-friendly. In China, water is recognized as a main source of arsenic. What do you think happens when therapeutic herbs are given contaminated water? According to China's Hebei Agricultural University, Chinese Herbal Medicines can be a serious arsenic exposure hazard. [7]

Arsenic is a carcinogens and recognized as an environmental and occupational pollutant. Regular exposure leads to cancer and other toxic health effects, including cardiovascular disease, skin hyperpigmentation, keratoses, neurological concerns, and developmental disorders. A 581-participant study conducted by the Harvard School of Public Health confirmed the association between arsenic exposure and DNA methylation, a biological process that causes many debilitating and fatal diseases. [8] [9] Johns Hopkins Bloomberg School of Public Health has linked arsenic exposure to high blood pressure and the New York University School of Medicine cites it as a contributor to cardiovascular disease. [10] [11] Also, most toxic chemicals adversely effect the male reproductive system and arsenic is one of them; Chinese research has confirmed it reduces semen quality. [12] Arsenic poisoning symptoms begin with:[13]

The University of South Carolina Department of Environmental Health Sciences warns that arsenic, along with lead and mercury, are known to produce horrible neurological effects on developing fetuses and young children. [14] Arsenic exposure during the first trimester of pregnancy is known to cause intellectual disabilities and the University of Massachusetts School of Public Health and Health Sciences reports that prenatal arsenic exposure may lead to diseases later in life; bladder cancer has been known to develop up to 20 years after exposure. [15] [16] [17]

Only consume purified water. Get yourself a small water purification device and, if budget allows, consider a water purification system for your entire house. This is mandatory. Research shows that sweating is helpful for detoxification of toxins, including arsenic. [18] Many people enjoy using a sauna to enhance the detoxification process of sweating. Because arsenic is very prevalent, total avoidance can be difficult but there are lifestyle adjustments you can take to minimize your exposure risks. To help achieve complete wellness, I recommend regular body cleansing in addition to following a healthy diet.