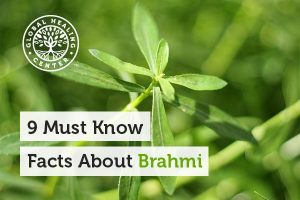 Bacopa monnieri, a plant commonly used in Ayurvedic medicine, has an age-old reputation for being an effective and powerful herb helpful for memory and combating stress. Bacopa monnieri, known to most as Brahmi, acts as an adaptogen; which means it helps the body adapt to new or stressful situations. The following 9 facts show the power and versatility of this therapeutic plant.

As people age, it's common for age-related brain degradation to happen. The active compounds in Brahmi, known as bacosides, are beginning to be evaluated for their effects on the brain and human health. Some research has shown the compounds in Brahmi to positively influence brain cells that prompt the regeneration of brain tissue. [1] In one animal study, long-term supplementation with bacosides showed therapeutic value against the rapid degeneration associated with Alzheimer’s disease. [2] Hopefully more will continue to explore its potential benefits for brain health.

The brain is not the only organ that benefits from Brahmi's health-promoting compounds. The liver is the body's main detoxifying organ, and studies suggest Brahmi may be useful for encouraging liver function following toxin damage. [3] With the daily onslaught of toxins in our environment and food, it's no wonder so many seek safe, natural compounds that support proper liver function.

When it comes to newborn infants, low blood sugar (hypoglycemia) can result in serious and immediate brain damage, inducing future motor and cognitive impairment. Studies have found bacosides to be highly-active compounds that exhibit neuron-protecting effects in hypoglycemic infants. Therefore, many researchers believe that Brahmi extracts may be effective for protecting newborn brains against hypoglycemia-induced brain damage. [4]

Doctors prescribe (and sometimes over-prescribe) opioids, like morphine and oxycodone, for pain management. Although these drugs are effective, their highly-addictive nature is a massive downside. Seventy-seven percent of chronic pain patients also suffer from depression and face an added risk of addiction. Researchers have discovered that bacosides may be helpful for enhancing the benefits of morphine while reducing the “high”, thus decreasing the risk for dependence. [5] [6] In addition, studies indicate that bacosides offer protective benefits for organs commonly affected by opiate toxicity. [7]

Any illness or irritation can cause redness and swelling in the body. No location more dangerous than the brain. Brahmi may be helpful at fighting this. Research supports its use for managing systemic redness in the brain caused by the body’s autoimmune response . [8] Much of the research is ongoing; however, the emerging data offers hope for new therapies in the treatment of chronic discomfort and redness.

Brahmi has been shown to increase the utilization of nitric oxide in the body and also appears to encourage vascular muscle function, two benefits that positively influence normal blood pressure. [9] While promoting normal blood pressure is not one of Brahmi's most well-known uses, the herb may still provide a valuable, natural approach to those seeking this benefit.

Antioxidants... can we get too many of them? Many researchers are evaluating natural plants, herbs, and foods for their antioxidant potential and findings indicate that Brahmi is a good one. It provides protection against oxidative damage, a type of cellular damage caused by free radicals. [10] The herb has also been shown to enhance antioxidant activity in other organs, like the kidneys. [11]

As with any plant or herb, it's a good idea to know its source in order to decrease the likelihood of consuming pesticides, GMO's, and pollutants. If Brahmi has a caveat, it's that it's very absorbent and can easily accumulate pollutants and other contaminants, such as arsenic, if grown in or around contaminated areas. In more than one case, Brahmi samples taken from a semi-urban area contained noticeable levels of lead, copper, cadmium, and zinc which exceeded safe thresholds. [12] [13] Conclusion? Only purchase organic or wild crafted Brahmi!

When cooking with herbs, fresh herbs offer substantial taste benefits. It turns out that the same is true for your health; as researchers have determined that fresh Brahmi is more potent in its healthy compounds. [14]