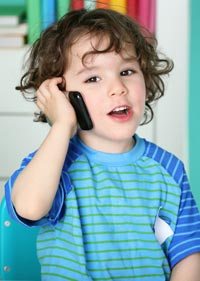 Kids love being connected to their friends, making it no surprise that recent statistics show that over 30% of all children under 13 years of age in the U.S. own their own cellular phone.

Similarly, almost 50% of all teens own a cell phone. With the knowledge that cellphone use amongst children is increasing at an alarming rate, it is even more disheartening to learn that studies are now beginning to prove some of the extremely negative effects that electromagnetic fields and radio frequency radiation are having on their bodies.

Multiple recent studies, including one from an international group of scientists, is urging governments to place stricter regulations on cellphone use, particularly due to the latest outcome of their investigations: Young people who use cell phones before the age of 20 are five times more likely to be at risk for malignant brain tumors than children who do not use mobile phones.

I am extremely glad that scientists are finally investigating how the world-wide expansion of wireless technologies such as mobile phones, wireless Internet, and other forms of cellular radiation, are effecting our human biology [1].

Health researchers from all over the world are coming together to look at how electromagnetic fields and radio frequency radiation affects our health in ways which are not being reported by the phone industry. Their findings suggest that, if no measures are taken to remedy the matter, we may end up with an epidemic of brain cancer in our youth.

Even the head of the University of Pittsburgh Cancer Institute, Dr. Ronald B. Herberman, has recently stated that there is a clear possibility of a direct relationship between cell phone use and the risk of cancer.

Recent studies are finding that:

How Common Are Electromagnetic Fields?

We are also exposed to the same type of radiation and electromagnetic fields from a variety of common appliances such as our televisions, cordless phones, satellite stations, and even our microwave ovens. We simply cannot wait for the government, and heavily subsidized cellphone fat cats to announce these dangers.

Quite frankly, the multi-billion dollar wireless telephone industry has done an excellent job at neutralizing the scientific evidence of the dangers.

For this reason, it is extremely important to not only be aware of the amount of exposure you are subjected to, but to also make proactive choices on how to neutralize your exposure to radiation and electromagnetic fields. There are many devices available that have the ability to block or absorb these negative radiation waves. It is so important that we protect and nurture the children of the next generation so please take this post seriously and spread the word to everyone you know!!

Have a happy and healthy day.