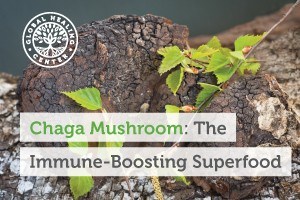 Chaga (Inonotus Obliquus) is a mushroom that typically grows on birch trees in colder climates across the Northern Hemisphere. At first glance, the mushroom doesn’t look very appealing; actually, it doesn’t even look like a mushroom at all! Appearances can be deceiving, however, as this special mushroom packs a punch when it comes to its health value.

What Is Chaga Mushroom?

Chaga has been consumed for centuries in the East, most typically as tea, where its health benefits are well established. More recently, chaga has been gaining popularity in the West, where its numerous health benefits are now being recognized by many health gurus. Technically, chaga is a highly-concentrated black mass of mycelium that protrudes from birch trees infected with parasitic — but non-toxic — fungus Inonotus Obliquus. The dark, hard and cracked exterior, which often appears like burnt charcoal, is called the sclerotium. The interior has a rusty yellow-brown color.

What Are the Benefits of Chaga Mushrooms?

The health benefits of Chaga are numerous, many of which can be attributed to its immune-boosting ingredients and antioxidants.[1] Let’s go through each of the top seven health benefits:

Chaga has an abundance of Beta-D-Glucans which help balance the response of the body’s immune system. This means that chaga helps boost the immune system when necessary, but slows it down when it’s overactive. This makes chaga a natural Biological Response Modifier (BRM). Chaga activates immune cells responsible for combating cancer initiation.[2] Research is still ongoing, as more studies are needed to determine chaga’s full role in cancer. However, chaga has proven effective in supporting standard cancer approaches, such as chemotherapy, by compensating for the program’s negative side effects. While chaga will not ease cancer progression, evidence suggests there may be vital compounds in the mushroom that warrant further investigation into its role.

Chaga supports the integrity of blood vessels and provides soothing properties in times of irritation. This can be helpful for those suffering from pain, neuropathy, and even diabetes.[3]

Due to its immune-boosting properties, chaga has long been used to support gastrointestinal health in Eastern culture. Most ulcers are caused by bacteria such as Helicobacter pylori, so a well-functioning immune system can fight off this pathogen. Ulcers may be soothed by the use of chaga, depending on the severity and the patient.

The chemical characterization and biological activity of extracts of Chaga mushroom were examined and showed high antioxidant and antimicrobial activity.[5]

The DNA protection chaga mushrooms may provide is impressive. Cells pretreated with a chaga mushroom extract displayed less damage than cells that did not receive the extract.[6]

So what are the ingredients behind chaga that provide all these health benefits? Let’s go through the 6 key ingredients that make chaga so healthy.

Beta-D-Glucans are known for their ability to modulate the immune system. Beta-D-Glucans also help with normalizing cholesterol levels and blood sugar.

Of the phytosterols present in chaga, 45 percent is Lanosterol, 25 percent is Inotodiols and the remaining 30 percent consists of Ergosterol, Fecosterol, and several others. In vivo and in vitro testing shows a direct effect of both Lanosterol and Inotodiols on cancer cells, with lanosterol imparting a positive effect on viral compounds.[9]

Betulin and betulinic acid are powerful therapeutic agents that are currently being researched for their effects on supporting healthy cholesterol levels. In addition to their favorable benefits for maintaining a healthy cholesterol profile, betulin and betulinic acid are also being studied in relation to cancer and viruses.[10]

Chaga sclerotium contains massive amounts of the natural black pigment known as melanin, which has high antioxidant levels due to the amount of polyphenols it contains. In fact, chaga has the highest ORAC score (the measure of antioxidant potency) of any superfood.

SODs are another important antioxidant present in chaga. SOD refers to a group of enzymes called Super Oxide Dismutase. These enzymes play an important role in protecting our body against the destructive effects of uncontrolled oxidation and free radicals. SOD potency is measured by the S-ORAC score.[11]

When it comes to health benefits, chaga performs very well when compared with several popular superfoods.

Quinoa provides a great source of flavonoids, vitamins, and antioxidants. The high quantity of quercetin that it contains can help cardiac and respiratory health, in addition to protecting cells from free radical damage. Chaga contains a much higher level of antioxidants that provide the same benefits within the bloodstream.

Avocado contains many beneficial nutrients such as folate and vitamin D. The combination of these nutrients plus lipids promotes lower cholesterol and heart health. The Beta-D-Glucans found within chaga also improve cholesterol levels by preventing cholesterol from being absorbed into the bloodstream during the digestion process.

Where to Find Chaga Mushroom

Chaga is not easy to find and people often mistake the mushroom for knots in the tree or burnt patches. You’ll find chaga growing predominantly on birch trees in cold habitats throughout the Northern Hemisphere, including northern parts of Europe, Russia, Korea, Canada, and the U.S. In North America, Chaga is almost exclusively found on birches in the northeast. In particular, it’s most commonly found on paper and yellow birch trees. Paper birch is a common forest tree with a white bark that exfoliates in broad, curling sheets. It’s found at low and high elevations in the northeast of North America. Yellow birch is another common forest tree and usually has a yellow bark that exfoliates as small, curling shreds. Most typically, well-developed chaga is found on birch trees older than 40 years and grows in all shapes and sizes on the outside of the birch trees it infects. You’ll typically see it in the form of a dome, cone, and horn with crusty ridges. To learn more about harvesting chaga, check out www.chagahq.com/harvest-chaga/.

How to Make Chaga Tea

The most popular way to consume chaga is by drinking a delicious cup of chaga tea. Below is my favorite simple chaga tea recipe for you to try at home.