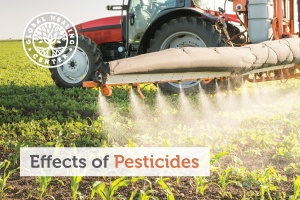 If a word has the suffix "cide" in it, you know it's meant to kill something. Pesticides are designed to eliminate insects, weeds, fungi, bacteria, and other things that feed on crops, spread disease, are a nuisance, or destroy property. Farming is big business, and most food-producing companies are driven to make money and pay the most attention to the bottom-line. Pesticides and genetically modified organisms (GMOs) are a way to ensure they get the crop yield they demand, no matter how it hurts the environment or consumers.

Pest control methods may be either biological or chemical in nature. Biological pest control can include fungi, bacteria, natural pest predators, and other organically present substances. Some biological measures include organisms that, without any manipulation, are naturally effective against pests; cats to mice, for example. These generally aren't toxic to humans or animals and don't leave a persistent residue.[1] Chemical pest control methods are often an entirely different story.

How Did We Get Here?

Seven of the most toxic chemical compounds known are approved for use as pesticides in the production of food! Who approved them? A multinational organization called the Codex Alimentarius Commission (CAC) that came together in 1963 to form a cooperative effort between the World Health Organization (WHO) and the Food and Agriculture Organization of the United Nations (FAO).

The intent of the original 172 nations involved in this effort was to develop a set of food guidelines, standards, and codes of practice. The Codex was to be an international endeavor to promote safety in food.[2] Some of the toxins used on foods are referred to as persistent organic pollutants (POPs). They're called persistent because they do not biodegrade, nor are they easily removed from the environment.

One of the greatest risks to our environment and our health comes from chemical pesticides. In spite of the dangers, the government maintains its approval of the use of toxic chemicals to make pesticides. And science is constantly developing new variations of these poisons.

Most pesticides kill pests directly on contact. Systemic pesticides work differently. They penetrate to the inside of a plant traveling along its absorption path.[4] These poisons work by poisoning the pollen and nectar of flowers, and this can kill needed pollinators like butterflies and bees.

Pesticides are a major threat to bees.[5] The systemic poisoning of flowers has killed a remarkable number of bees. We're simply losing too many of them. The bees and butterflies are pollinators, and they represent a natural tour de force in perpetuating plant cycles and the natural evolution of plants that rely on pollinators. You see, bees cross-pollinate to collect their food.

Almost a quarter of maintained beehives did not survive the winter of 2014 to 2015.[6] That translates to a loss of tens of billions of bees. And it's estimated that this loss will negatively impact the agricultural economy to the tune of $15 to 30 billion every year.[7]

Who's at Risk for Exposure to Pesticides?

Farmers and their families and other people who use chemical pesticides regularly are at greatest risk for pesticide toxicity in their bodies. Anyone who uses pesticides, or is present when pesticides are sprayed, is at risk for dangerous exposure. The pesticides can enter the body through skin, eyes, mouth and nose.[8]

When chemical pesticides are used, they spread across larger areas, as they:

What Are the Dangers from Pesticide Exposure?

Pesticides can be toxic to humans and animals. In some cases, it only takes a small amount of some toxins to cause harm. Other toxins that are slower acting may take a longer time.[9]

Children seem to be greatly susceptible to the toxic effects of pesticides. The Natural Resource Defense Council has collected data which recorded higher incidence of childhood leukemia, brain cancer, and congenital disabilities. These results correlated with early exposure to pesticides.[10]

Even just using pesticides in amounts within regulation, studies have revealed neurotoxins can do serious damage during development. Researchers report the dangers of pesticides can start as early as fetal stages of life.[11]

What you also need to understand is that toxins from pesticides can remain in the body and build up in the liver and fatty tissue.[12] And even at "safe" levels your reactions can be mild to severe. High levels of exposure can be even more serious. How do you know if you're going to be ill? You don't. You just have to hope for the best. How will you be affected? Well, you don't know how your body will react to the toxins until it happens.

Several factors determine how your body will react including your level of exposure, the type of chemical you come in contact with, and your individual resistance to the chemical. Some people are unaffected or are mildly affected, while others become severely ill from similar levels of exposure. Some possible reactions are:

How to Eliminate Toxins from Pesticides

Grow your produce. Growing your own crops means that you can use healthier methods to control any pests. There are all-natural remedies for controlling pests and enriching soil. Or you can use organic pest control methods.

If growing your food is not an option, shop healthy. Visit your local farmer's markets for the freshest organically grown foods. At your local grocery store, look for organic, local food products. More and more stores are working to accommodate this new healthier appetite by providing consumers with organically grown products.

There are certain produce items that contain the highest levels of pesticides. Avoiding these crops can reduce your pesticide consumption levels by as much as 90 percent. Some of these items are fruit like cherries, apples, peaches, pears and grapes. Vegetables you could avoid are celery, spinach, and sweet bell peppers. Remember, if they are responsibly grown, then these are safe to eat.

If you are concerned about your exposure to chemicals in the environment, consider our Chemical and Heavy Metal Cleanse Program™. Over 30 days, you will detoxify your body using zeolite-based liquid extract (Zeotrex®) and Dr. Group, DC's Organic Detox Foot Pads™. Our awesome customer satisfaction team can answer any questions you have!