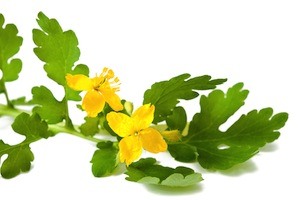 Chelidonium majus, or greater celandine, has a long history of use in many European countries. Ancient Greeks, Pliny the Elder, and Dioscorides all called celandine an effective detoxifying agent. The Romans used celandine as a blood cleanser. The French herbalist Maurice Mességué cited celandine tea for help with liver concerns.

Its use also extends to traditional Chinese medicine, and it’s become an important part of western phytotherapy. Extracts of greater celandine have exhibited a broad spectrum of toxicity to harmful organisms as well as liver protecting activity. This has led to the inclusion of greater celandine in liver and gallbladder cleansing and support protocols.

Greater celandine extract has strong antioxidant potential, specifically from the alkaloid and flavonoid components.[1] The greatest content of the beneficial alkaloids has been found in the root, sometimes achieving 2-3% concentrations. This has prompted greater celandine to be included in preparations designed to support the biliary tract and liver,[2] such as Liver Health, my enhanced blend of herbs that help detoxify and support the normal function of the liver and gallbladder.

Greater celandine contains chelidonic acid, which has been found to relieve discomfort and be aggressive against certain harmful organisms. In one study, chelidonic acid was found to temper indications of ulcerative colitis and provided the foreground for examination into greater celandine's therapeutic role in relieving other intestinal irritation.[3]

The Department of Tropical and Subtropical Crops at Czech University in the Czech Republic tested the activity of extracts from 16 Siberian plants against five species of microorganisms. Greater celandine was among the five plants shown to have the highest activity.[6]

The preliminary reports provide a positive glimpse into the potential for greater celandine. As always, consult your healthcare provider before taking any supplement, especially if a history of liver disease exists in your family. A few reports have been passed around of some people experiencing liver concerns as a result of very large amounts; however, these reports are anecdotal. Regardless, if you’re pregnant or nursing, avoid greater celandine for the time being.