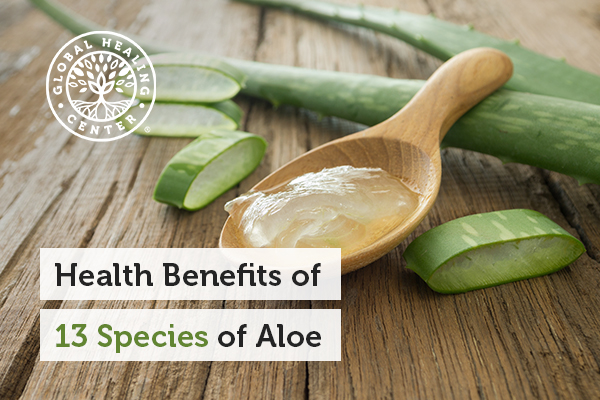 Many species of aloe are popular houseplants because they are versatile and able to thrive indoors without requiring much care. This is beneficial because live plants like aloe can improve air quality and help promote a healthier indoor environment. In fact, indoor plants are one of my recommendations for protecting yourself against sick building syndrome. But that’s not all these plants are good for.

In the U.S., aloe is well-known in for its benefits to the skin. In many cultures around the world, people use a variety of aloe species (there are over 400 [1] such species after all!) for their nutritional and therapeutic properties. Aloe vera is the most encountered species of aloe and the most well known for delivering powerful benefits to your health. In addition to using aloe vera to care for their skin, many people are beginning to enjoy the plant for its nutritional benefits. You may be surprised to learn that aloe vera is a superfood. Few supplements today rival the complete nutritional benefits of this plant.

Of course, many of the lesser known aloe species boast health benefits of their own. Here we will show you 13 of these and explain some of the ways that they can benefit your health.

Benefits of 13 Species of Aloe 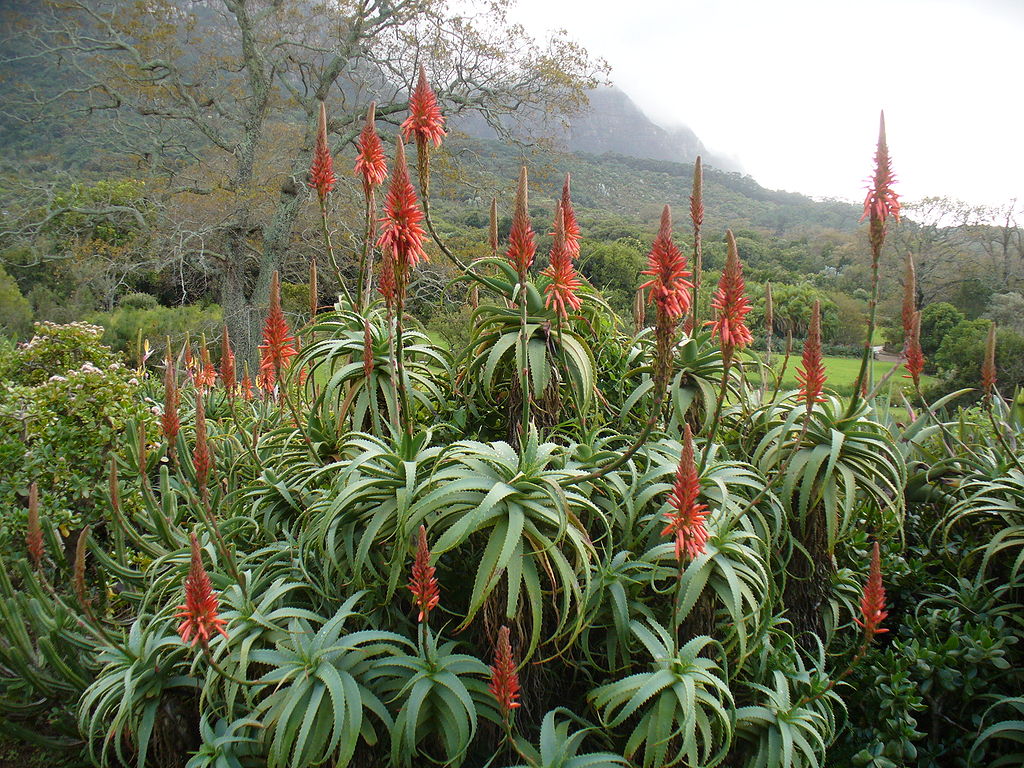 Often called the “candelabra aloe”, aloe arborescens can grow up to 10 feet tall and become as big as a small tree. Vibrant red-orange cylindrical flowers rise high from the plant’s leaves to give it a distinctive look. As with many aloe plants, researchers report a variety of healing properties. Aloe arborescens aids in the healing of wounds in animals and shows action against harmful organisms. [2] A study from Italy also showed that when used as a nutrient therapy, it supported the immune system and other health benefits. [3] 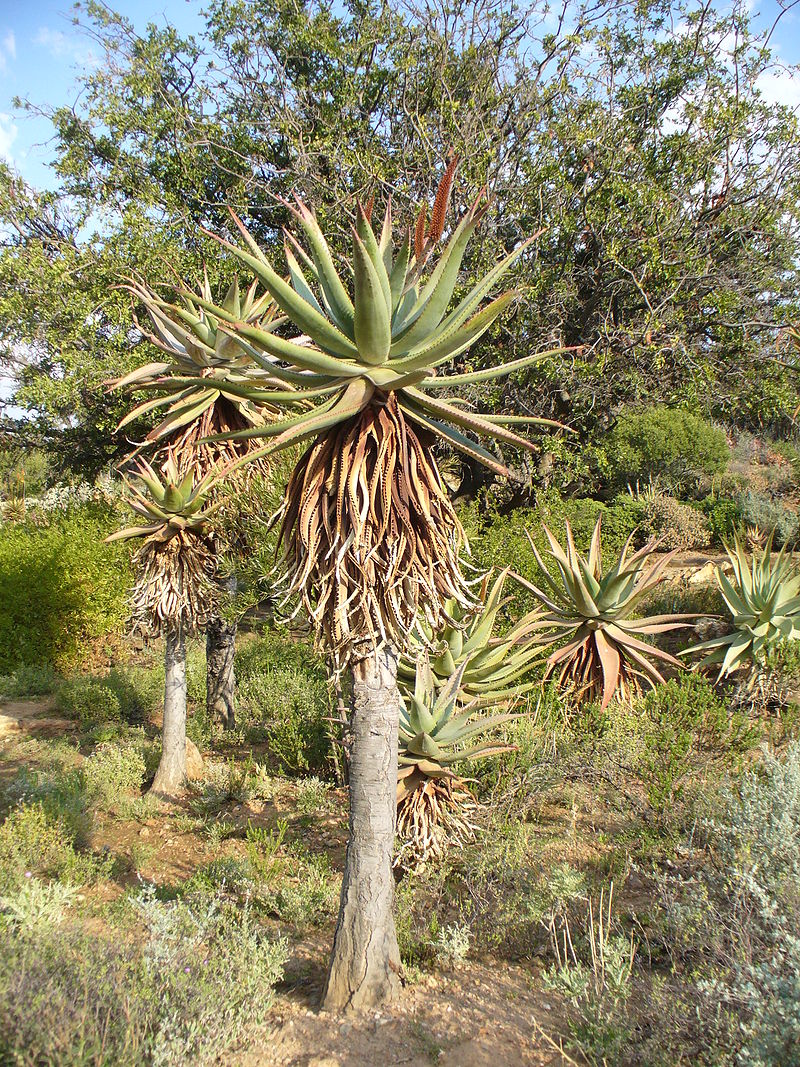 Aloe ferox is also known as “cape aloe”, “red aloe” or “tap aloe”. Another tree-like aloe plant that can reach 10 feet in height, its red flowers grow 2 to 4 feet above its leaves. Extracts from this plant have natural laxative properties and studies show it as effective against occasional constipation. [4] Researchers have found that oil from the seeds contains high levels of linoleic, stearic and oleic fatty acids used in many cosmetics and may offer a natural way to nourish and rejuvenate the skin. [5] 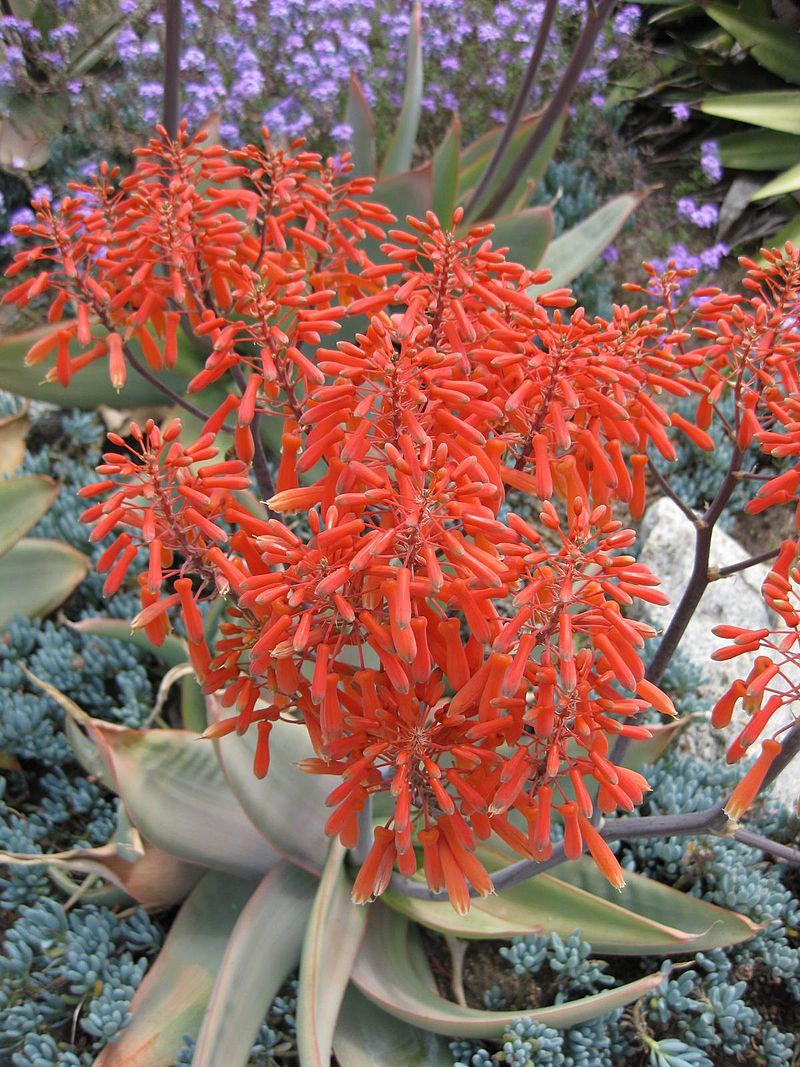 This small, stemless aloe plant is called “coral aloe” because of the pink tint on its leaves. Aloe striata have wide, smooth leaves. This is a far cry from the “teeth”, or small spiky-projections, found in many aloe varieties. This particular species survives in hot, dry environments and is well-known for its ability to store large amounts of water. It’s a hardy plant that gardeners absolutely love. Research suggests it may support digestion. [6] 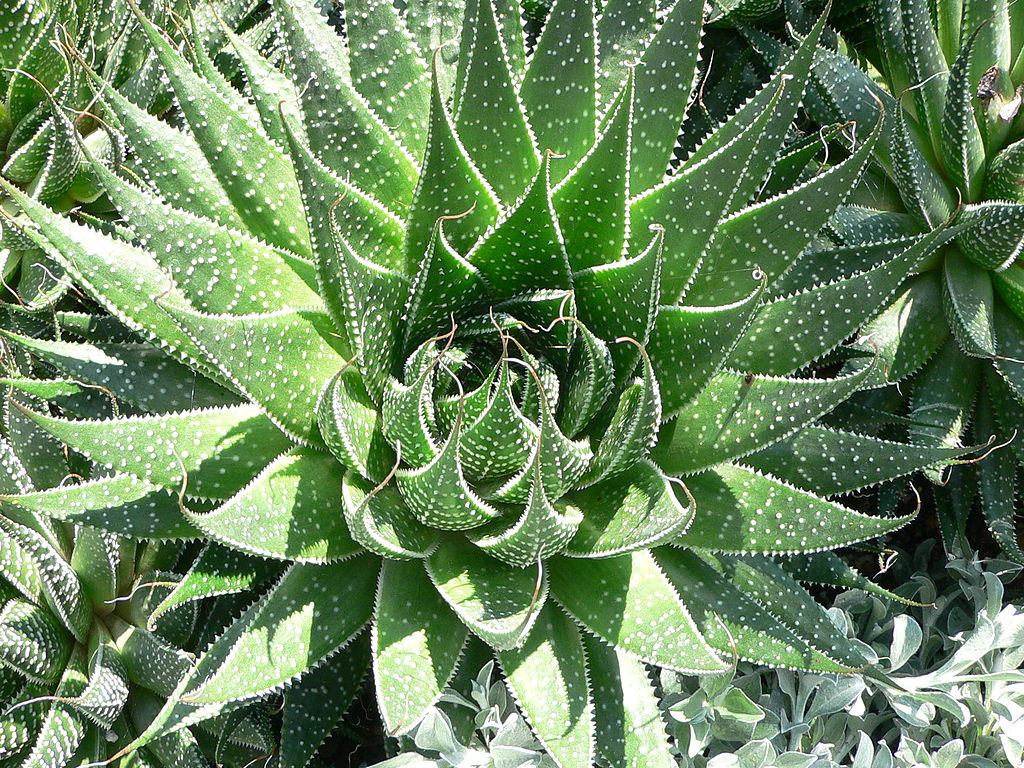 The stemless aloe, also called “lace aloe” and “guinea-fowl” aloe, is known for its deep green, saw toothed leaves and their unique white speckles. It looks a lot like another common succulent, the haworthia, and is often confused with this distant cousin. Its large orange flowers attract a variety of birds and insects, especially bees, that encourage the health and longevity of this plant and other plants in its immediate area. That makes it another excellent plant for gardens, as it requires little care and thrives in warm and cool climates. The aloe aristata also has therapeutic roots, as it is used it for wound healing in Ayurveda. [7] 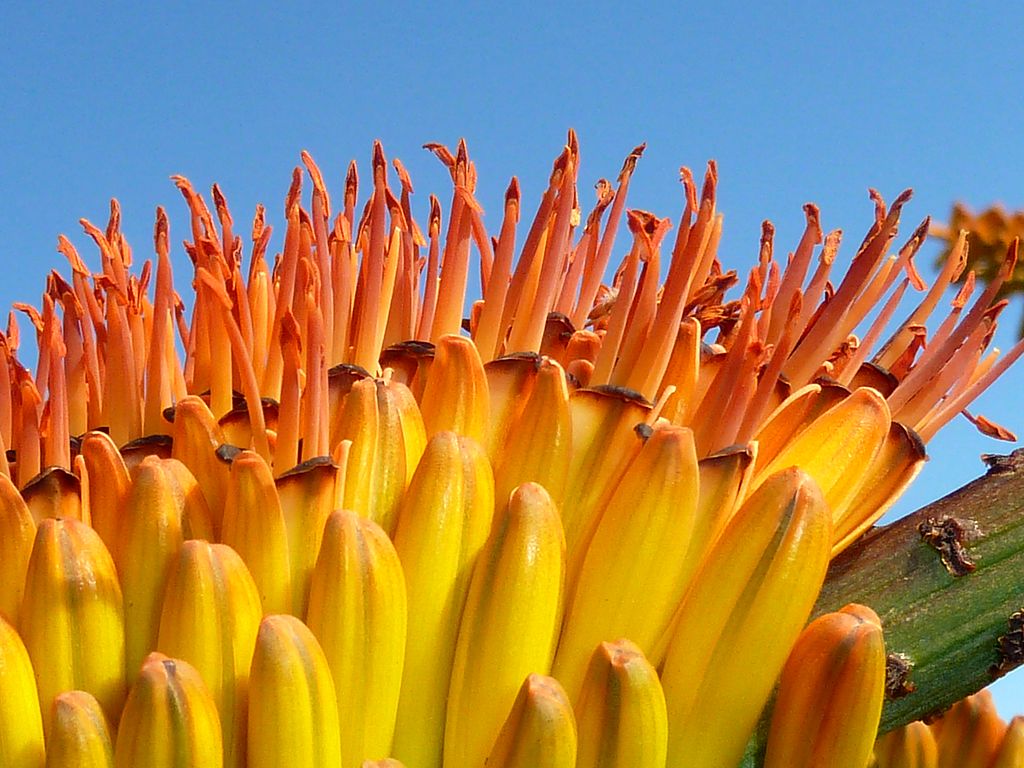 Known as “mountain aloe”, aloe marlothii can reach heights of 20 feet tall. It features robust, spiky-grey-green leaves that can reach 5 feet long that grow from a central “head”. Its flowers range in color from orange to yellow to a vibrant red. A recent study found that aloe marlothii can be used to moisturize skin and may promote overall skin health similar to aloe vera. [8] 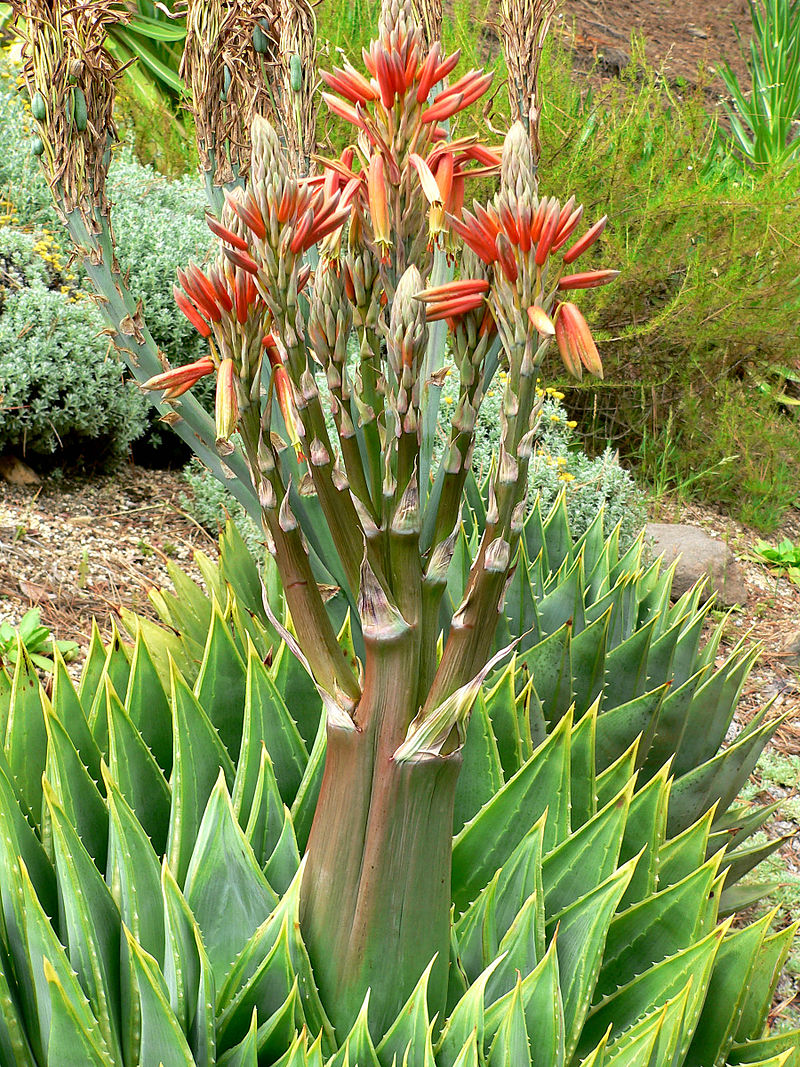 While many species of aloe are used in cosmetic products, you won’t find the aloe polyphylla in your local beauty shop. Highly coveted for its beauty, overuse as an ornamental plant has greatly over-extended this particular aloe and has led to a severe decline in its population. Frequently called “spiral aloe”, this plant has a distinct, 5-point growing pattern with flowers of different shades of red and leaves with serrated edges and sharp tips. 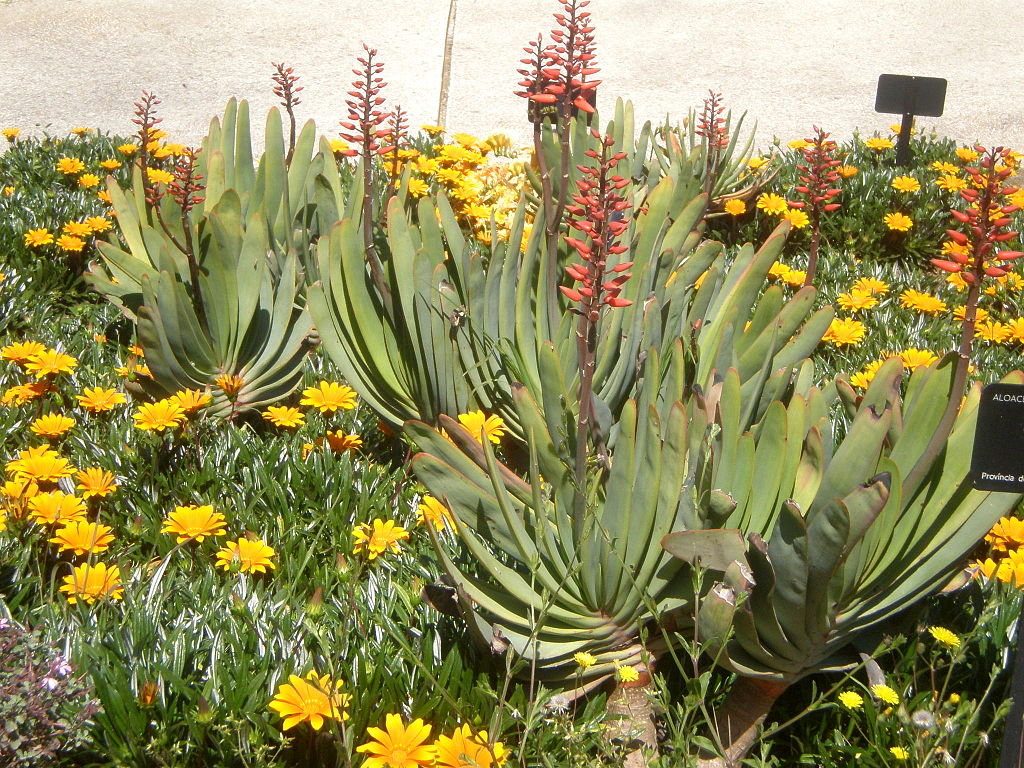 Another aloe that has been all but depleted by its widespread use as a decoration, aloe plicatilis is known for its fan-like leaves that inspired its common name “fan aloe”. This particular species can grow to be over 10 feet tall. Today, this plant is protected from common uses, such as becoming an ingredient in cosmetic or therapeutic products. That’s because the aloe plicatilis is now an endangered species. 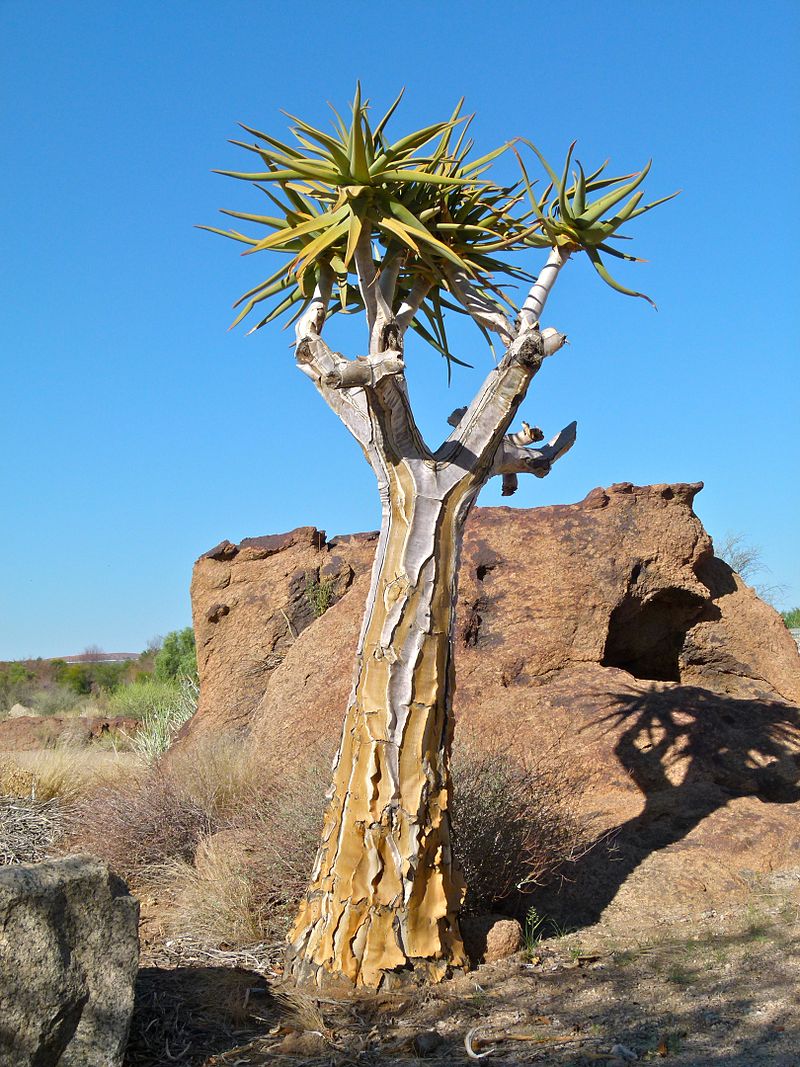 Aloe dichotoma, or the “quiver tree”, is a tall aloe species that grows tall and branches out like a tree. Once frequently used in landscaping to provide support for its the surrounding environment, this aloe was labeled “critically endangered” in 2011.

The aloe petricola plant is a popular addition to any garden because of its vibrant orange, yellow and red flowers. Known as the “stone aloe”, this particularly species is a great environmental booster. Never underestimate the power that plants can have on the other living things in their immediate vicinity! 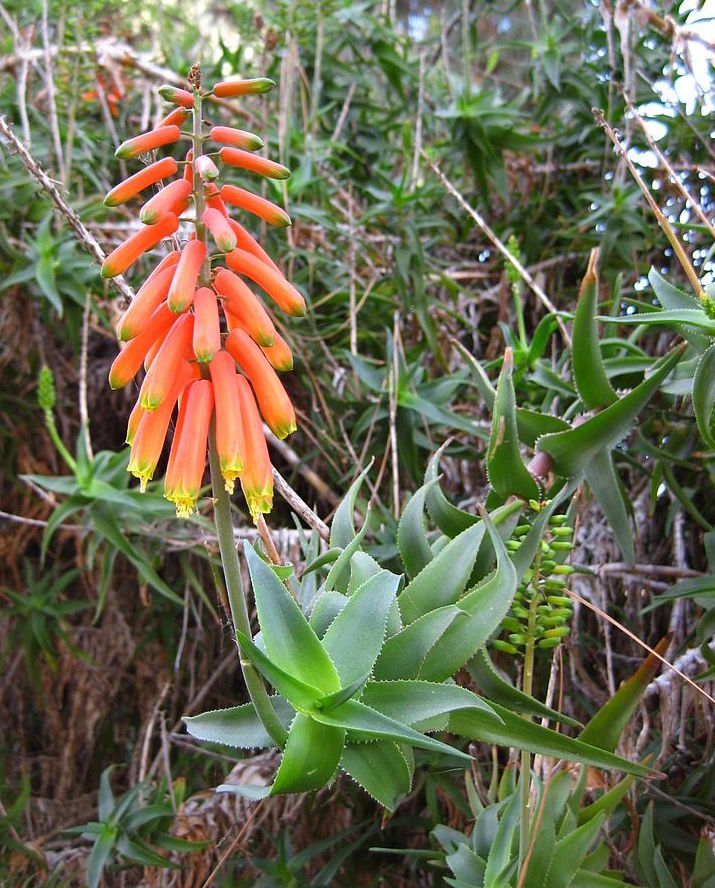 Aloe ciliaris, frequently called the “common climbing aloe”, is a thin, tough plant that is known for growing incredibly quickly. It also boasts tubular red flowers and has soft, hair-like teeth. Aloe ciliaris is another aloe that does well in a garden, as it is known for attracting bees and birds that enrich and support other surrounding plant life. 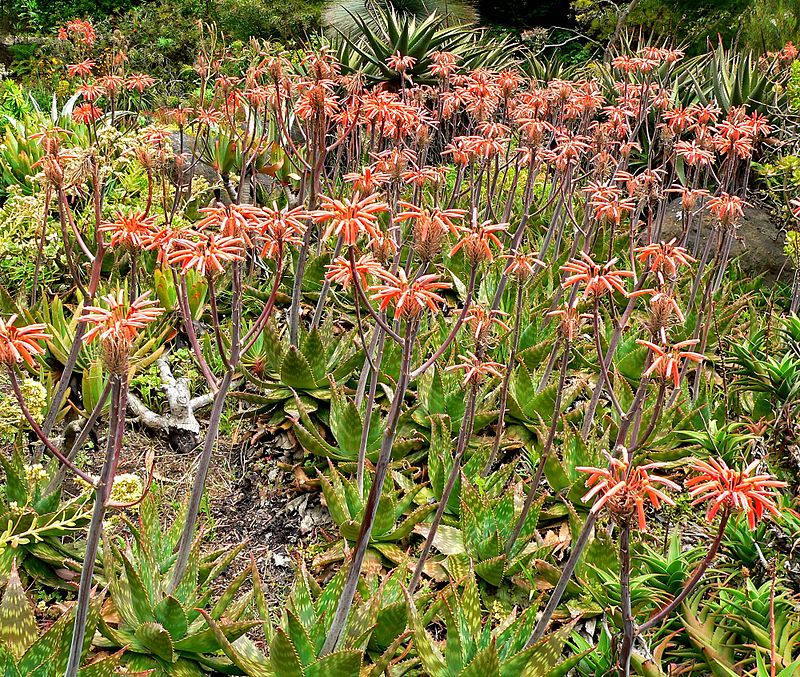 Referred to as “soap aloe”, the sap of aloe maculata makes a soapy lather in water. Another popular nickname for this particular aloe is the “zebra aloe”. You can recognize this aloe species by its long tubular flowers that range in color from red and green with spots that look like the letter “H”. One unique attribute of this particular species of aloe is that its pollen generation can be increased by smoke [9] making it incredibly widely available. This makes the aloe maculata a popular choice among gardeners who are able to utilize this plant’s unique ability to support its surrounding environment. 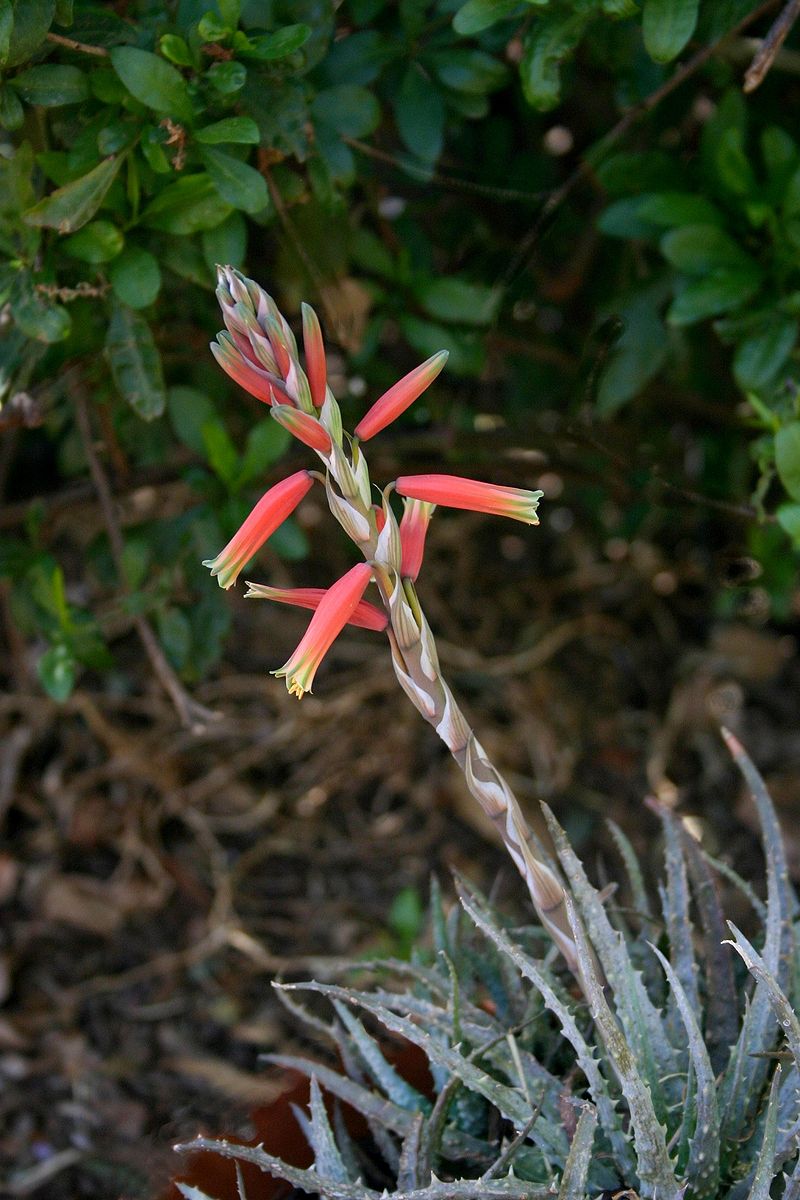 The aloe humilis plant has long, narrow triangular leaves lined with white teeth. Its stem also sprouts clusters of red, orange, and yellow flowers. The fresh gel of this particular plant has been shown to relieve sunburns as well as popular gels made from another popular aloe, aloe vera. [10] 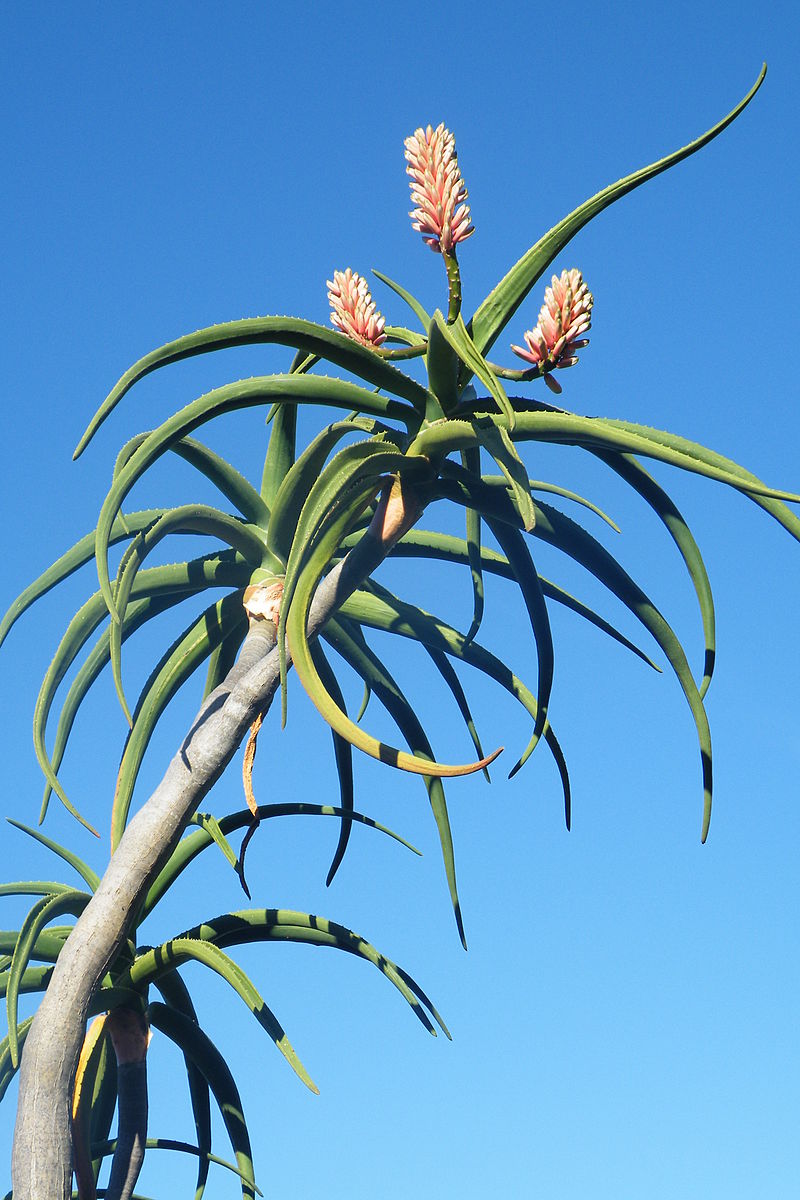 This “tree aloe” is often cross-bred with aloe dichotoma to produce a popular hybrid called “Aloe X Hercules”. Aloe barberae itself grows over 50 feet tall, features rose-pink flowers with green tips and can be used to support your health in a number of different ways. Studies show it's powerful against harmful organisms and has ultra soothing properties. [11]

Dr. Group, DC outlines holistic, effective tips and suggestions to start positive changes in your life today. Enter your email below for the free guide!

Powers of the Aloe Plant

Remember, there are over 400 species of aloe with each plant providing unique health benefits. We’ve only introduced 13 of these here. Nutrient-dense plants like aloe vera offer effective ways to consume important vitamins, minerals and antioxidants that support your overall health and well-being. Aloe vera juice has become a popular way to take aloe, but I recommend Global Healing's Aloe Vera. This is a new bioactive aloe vera supplement I created to make it easier to get the nutrients that will benefit you the most. Global Healing's Aloe Vera is made from 100% organic inner aloe vera leaf and has a bioactive profile similar to pure aloe vera.