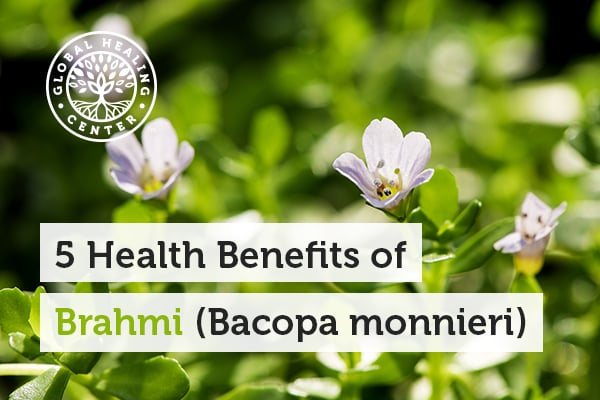 A traditional, therapeutic herb native to India, brahmi (also known as Bacopa monnieri) is commonly used in Ayurvedic medicine as a memory enhancer, aphrodisiac, and general tonic. [1] Its impact on cognitive performance has prompted a number of investigations into its positive benefits. Here are just a few of the health benefits attributed to brahmi.

Many diseases, brain and otherwise, are connected to chronic irritation and redness in the body. Plants like brahmi and turmeric have been studied extensively for their ability to fight discomfort and systemic redness. One review has identified brahmi as a potential therapy for chronic discomfort and neuropathy. [2] [3] [4] [5]

If the effects of daily stressors are getting the best of you, brahmi supplementation may be something to explore. Stress reduction is perhaps brahmi's most well known, traditional use. A study evaluating brahmi supplementation reported significant mood improvement among participants, as well as decreased levels of cortisol, the stress hormone. This suggests that brahmi counteracts the effects of stress by regulating hormones involved with the stress response. [6]

A recent, placebo-controlled study of 24 volunteers reported that brahmi boosted cognitive performance. These results support use of the herb as a therapy by persons suffering from cognitive issues, short attention span, foggy memory, and blurred focus. [8]

Alzheimer’s disease is a debilitating and heartbreaking disease, usually caused by a plethora of physiological, genetic, and environmental factors. Amyloid formation in neurons can cause significant brain damage and influence the development of Alzheimer’s disease. It's important to understand that, to date, no herb, plant, drug, or anything – including brahmi – has been found to be the magic bullet against Alzheimer’s. Based on its history as an herbal therapy to promote neurological function, some have suggested that brahmi may be a promising therapy for Alzheimer’s. [9]

Nobody ever said French fries were healthy but do you realize just how toxic they can be? Enter acrylamide. Acrylamide is a toxic compound that forms when starches are heated above 248 degrees; in other words – fried. Acrylamide is a carcinogen that also damages brain tissue. In animal models, brahmi supplementation protected brain cells exposed to acrylamide from oxidative stress and neurotoxic effects. [10]

What's Your Experience with Brahmi?