Written by The Global Healing Team 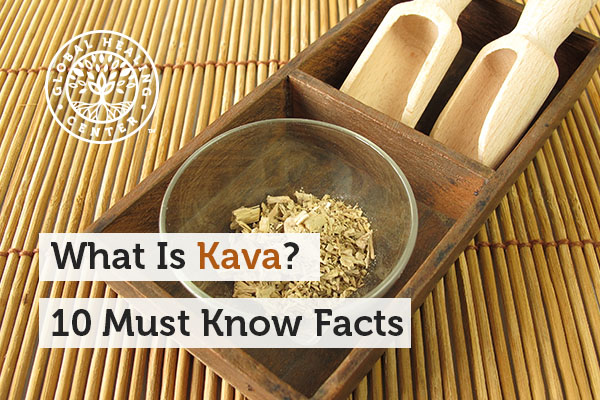 A few years ago, my wife and I were on Hawaii's big island and walking through a quaint shopping area when I noticed a small, hole-in-the-wall establishment that served kava. For the uninitiated, kava is a relaxing, non-alcoholic beverage made from the root of the kava plant, it's popular in the Pacific islands. I'd heard of it but hadn't tried it and figured it'd be a good opportunity. I walked up, paid $6 for a coconut shell of liquid that resembled dirty dishwater, and down the hatch it went. It didn't take long before I was enveloped in a feeling of clear relaxation and realized why Polynesian culture appreciates it so much.

10 Things You Need to Know About Kava

Kava isn't some big secret, but it's not a mainstream staple on the mainland. So, let's take a look at the top 10 things you need to know about kava.

Kava, also known as Piper methysticum, kava kava, and 'awa, is a small shrub native to the islands in the South Pacific. The root and stems are made into a non-alcoholic, psychoactive beverage that has been used socially and ceremonially for hundreds of years in Hawaii, Fiji, and Tonga.[1]

Kava is traditionally prepared by placing ground root and stem into a porous sack, submerging in water, and squeezing the juice into a large, carved, wooden bowl. Coconut half-shell cups are dipped and filled – punch bowl style. After drinking a cup or two a feeling of heightened attention combined with relaxation begins to come on. Although it is soothing, it is unlike alcohol in that thoughts remain clear. The flavor is largely inoffensive, but some find that it takes getting used to; it really depends on your preference for earthy flavors.

Kava has been marketed since the early 90s as an herbal remedy for stress, anxiety, and insomnia; its popularity has grown ever since.[2, 3, 4] The excitement is justified, as the clinical evidence supporting its use is quite extensive.[5] Kava contains compounds known as kavalactones, they're responsible for its psychoactive qualities. In the brain, they operate on non-opiate pathways to offer a natural and non-narcotic action against anxiety.[6] Some clinical research even suggests that they're as good or even better than pharmaceutical drugs like benzodiazepines.[7]

According to Duke University Medical Center, kava is beneficial for anxiety and doesn't produce dependency or negatively affect heart rate, blood pressure, or sexual function.[8] In a 75-participant, 6-week, double-blind trial conducted by the University of Melbourne Department of Psychiatry, kava was found to reduce anxiety and, aside from a few reported instances of headache, was well tolerated.[9] It's even been described as a promising candidate for future research into improving attention disorders.[10]

For many women (and men), menopause is a time when hormone levels go haywire and lead to mood swings. Although hormone replacement therapy and mind medicines are frequently used, many women prefer natural therapies. In this regard, menopausal women may find kava to be an excellent option. It is known to help psychological status without affecting the therapeutic action of estrogen – this is especially important when osteoporosis and cardiovascular disease are a concern.[11, 12]

In 2003, a clinical study reported that kava encouraged a healthier, pleasant mood among menopausal women.[13] Coincidentally, or perhaps not, research conducted earlier this year also found that kava significantly increases libido in women.[14]

If you start researching kava, warnings about liver damage are the first you'll discover. This is a subject with much contention. While some suggest it is toxic to the liver, most research indicates there is little evidence to support this notion.[15, 16, 17] Both Ohio State University and the South Dakota State University College of Pharmacy conducted animal studies and found that not only was kava non-toxic to the liver, but may even protect the liver.[18, 19] One of the primary arguments is that liver damage from kava is unpredictable, dose-independent, and not reproducible; thus individual metabolic differences are more likely.[20]

Well, not really, but one noted side effect of long-term, heavy, consistent consumption of kava is the development of a scaly skin rash known as dermopathy. There are several hypotheses concerning its cause. Some speculate it may be the result of interference with cholesterol metabolism.[21] Niacin deficiency, which can cause skin changes, has also been examined but cleared as a potential cause.[22] Another idea is that certain metabolites bind to skin proteins and cause an immune response.[23] Regardless, it's often only associated with heavy, prolonged use and is reversible when consumption stops.[24]

6. Kava Is Used as Therapeutic Support for Addiction

Substance abuse is a large and expensive concern in the United States and the chemistry of craving has become a focus within addiction research. Within this realm, kava may have significant value. Kava contains compounds known as kavapyrones that bind to brain locations associated with addiction and cravings. Although preliminary and exploratory, some clinical studies have shown that kava may be able to reduce drug cravings. Hopefully, future investigations will continue to examine these potential benefits![25]

This isn't exclusive to kava, it applies to all herbal therapies. Your body is an ongoing chemistry experiment, and everything you consume can affect it. The metabolizing enzymes that process food and nutritional supplements are the same that metabolize prescription drugs and interactions can occur. If you're taking prescriptions, talk to your prescribing doctor before starting supplemental therapies, including kava.[26]

The South Dakota State University College of Pharmacy warns that kavalactones inhibit several enzymes and block certain receptors and uptake channels. While this is not inherently a concern, it can be if taken with drugs that are metabolized by those enzymes or have similar pharmacological properties.[27]

8. You Should Think Twice About Concentrated Extracts

As explained before, traditional kava preparation involves extracting the active compounds with water; it's very similar to making tea. Some companies, however, have taken the chemistry a step further and offer concentrated extracts that are produced using harsh solvents such as acetone or methanol. Although some studies suggest that extracts are mostly void of toxic effects, others have raised the idea that perhaps extracts are what cause liver damage.[28] Solvents may react with kava to produce harmful, reactive metabolites.[23] Additionally, not only does water extract the kavalactones, but it also extracts glutathione – a compound that promotes liver health.[29] Besides, water is the traditional preparation medium and it's more efficient at extracting the beneficial kavalactones.[30]

9. Some Folks Are Tarnishing Kava's Image

Unfortunately, there is always a seedy side of society that has to pervert the holistic use of herbs like kava. It can't just be left alone and appreciated in its traditional form – some unscrupulous dregs always have to gunk it up. For example, the University of California San Francisco School of Pharmacy discovered a number of questionable online merchants whose marketing efforts have completely discarded the traditional attitudes regarding kava and simply promote it as a "legal alternative" to illegal drugs.[31] Certain brands of "herbal ecstasy" have included kava in the formula.[32] More recently, the antithesis to energy drinks, known as "relaxation drinks" have become available. They contain ingredients such as melatonin, valerian, kava, and tryptophan, which is fine except that they're lamely advertised as smooth, cool sedatives in a can.[33] To really top off the ridiculousness, some "bust enhancing" products even contain kava! (In case you're wondering, they don't work.)[34]

Concerns have been raised over the effect of sedatives – prescription and herbal – on driving ability. It's a valid concern, safety is extremely important and kava does elicit a certain physically tranquilizing effect. To assess the situation, researchers at the University of Melbourne conducted a driving simulation experiment with 22 adults who were given a "small" serving of kava. Although no impairing effects were observed, researchers cautioned that "small" is relative and the conclusion was, by no means, conclusive; additional research is required before an all-out safety rating can be assessed. The best idea? Play it safe, if you're going to enjoy kava, don't drive.[35]