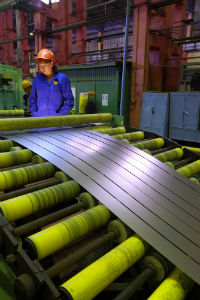 Titanium is the ninth most abundant element in the Earth's crust. This abundance and its status as a corrosion resistant, strong metal have landed it many industrial applications where its best features can be fully taken advantage of. Some uses include airplane motors, jewelry, and heat exchange systems. Because titanium itself is non-toxic and not rejected by the body, the medical industry has embraced it for implants such as hip and joint replacements. Despite the upsides, much concern has been expressed about the use of titanium compounds as a food and cosmetic additive.

How Does Titanium Exposure Happen?

Exposure to titanium often happens by way of titanium compounds that are added to cosmetics, sunscreens, paints, and food. Titanium dioxide nano particles is usually the compound in question and safety concerns have been expressed. Unfortunately, you don't have a choice in whether or not you're exposed. Even if you avoid products that contain titanium dioxide nano particles, the other nano particles that everyone else uses will be excreted or washed away into the sewage system and into the environment. Even with a low exposure, this may manifest into a range of effects.

Another matter of concern is that titanium dioxide is an ingredient in food coloring... and the foods with the highest content are candy and gum. A Monte Carlo analysis found that children have the greatest exposure because of high titanium content in sweets. Personal care products such as toothpastes and sunscreens often contain titanium too. [1]

The safety profile of nano particles for infants and the unborn is not known. Some studies have suggested the concern over titanium nano particle safety to be "overblown". I disagree. Titanium oxide nano particles have been shown to induce emphysema and lung redness in adult mice. Furthermore, exposure of developing lungs to nano particles may lead to chronic irritation and negative effect on lung development, increasing the risk of respiratory disorders. No thanks! [2]

Inhaling titanium nano particles is bad for your lungs. Researchers at the National Institute for Occupational Safety and Health in Morgantown West Virginia observed significantly elevated levels of lung injury in rats that had inhaled titanium compounds. [3]

Titanium's Effect on Your Brain

Titanium exposure may be harmful to your brain. Titanium nano particles can enter directly into the hippocampus region of the brain through the nose and olfactory bulb. Research conducted by Escuela Superior de Medicina at Instituto Politécnico Nacional found that titanium dioxide had a toxic effect on glial cells in the brain, suggesting that exposure to titanium dioxide may cause brain injury and be a health hazard. [4]

Long-term chronic exposure and environmental pollution are not documented and a relationship between nano particle exposure and development of degenerative brain diseases may exist. [5]

Is Titanium Exposure a Risk Factor for Cancer?

The biggest kicker is that even though although titanium dioxide is permitted as an additive in food and pharmaceutical products, it's also classified as "possible carcinogenic to humans" by the International Agency for Research on Cancer and the National Institute for Occupational Safety and Health. Studies show that titanium dioxide causes adverse effects by producing oxidative stress, resulting in cell damage, redness, and immune response. [6]

A French examination into the safety of titanium dioxide said that, "The weight of scientific evidence suggests that insoluble nano particles used in sunscreens pose no or negligible risk to human health, but offer large health benefits, such as the protection of human skin against UV-induced skin aging and cancer." Given that L'OREAL sponsored the study, I'm inclined to take it with a grain of salt. [7]

Until long term data on the absorption, distribution, excretion and toxicity of titanium nano particles is available and until relevant data on human exposure exists, I recommend avoiding titanium compounds. Laboratory tests are available to determine the levels of titanium dioxide or metallic titanium in your body. If you're concerned about your exposure to titanium, I would encourage you to get tested to determine your levels and perform a toxic metal cleanse if you feel they are too high.