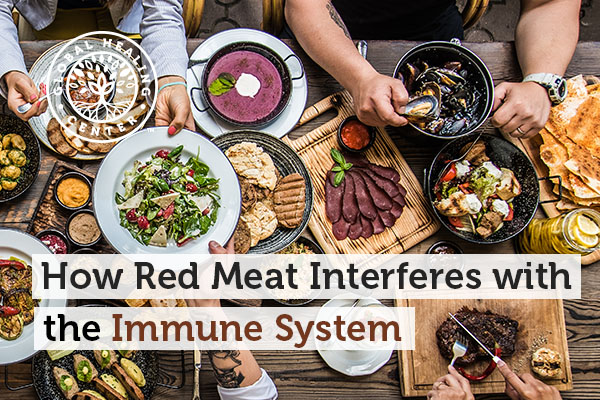 There has been a lot of controversy surrounding red meat in recent years, with some experts concerned that eating large amounts may increase the risk of heart disease, atherosclerosis, and type 2 diabetes. While meat could be considered a natural food, its conventional processing often results in a food product that is far from natural or healthy.

The Toxic Truth about Red Meat and the Immune System

Meat is considered a staple in the diets of millions of people all across the globe, and some people simply feel they can’t live without eating some type of red meat every day. While meat has some nutritional quality, it is by no means a complete food. Nutrient-dense options like vegetables, nuts, and seeds provide more nutrition than meat and don’t usually contain additives, hormones, or antibiotics.

Until recently, experts struggled to explain the link between red meat consumption and cancer, coming up with only a few plausible reasons. A new study, however, has revealed a potential reason behind red meat’s cancer-causing effects — excess amounts of a special sugar called Neu5Gc. [1] When scientists studied the presence of Neu5Gc in different types of food, they discovered that beef, pork, lamb, and bison had substantially higher levels than poultry, fish, fruits, and vegetables.

Neu5Gc is naturally produced by carnivorous animals, allowing them to sustain high red-meat diets without negative health effects. Because humans do not produce this sugar, however, the body treats it as a foreign substance, setting off a toxic immune reaction. This reaction can cause chronic inflammation that may contribute to cancer.

To conduct the study, scientists at the University of California bred mice without the ability to produce Neu5Gc. Researchers found that when these mice were fed a Neu5Gc-enriched diet, they developed five times as many tumors as mice fed a normal diet.

While red meat may trigger this harmful reaction, scientists maintain that red meat — in moderate amounts — is a good source of nutrition. When eaten in moderation, red meat can be an important source of protein, vitamins, and minerals. Experts recommend limiting your red meat intake to 2.5 ounces per day, which is the equivalent to about two slices of roast beef, one lamb chop, or three slices of ham.

My Thoughts on Red Meat

In short, while research shows that eating red meat may speed the development of cancer, findings don’t implicate red meat consumption as a direct cause on its own. At the same time, meat is not the most nutritious food on the planet. In order to receive a higher level of nutrition, I suggest choosing foods like quinoa, nuts, green vegetables, and fruits for the bulk of your diet. These foods will provide essential amino acids, antioxidants, fiber, fat, and protein, ensuring that all your macro and micronutrients are met. If you must eat meat, be sure to balance it with the healthy foods above while also getting enough vitamin D and exercise. These components will support immune system health.