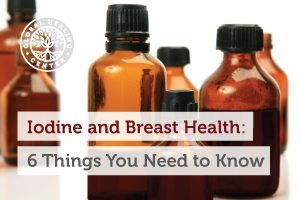 The necessity of iodine isn't exclusive to the thyroid, the entire body needs it. You might say that your body requires iodine the way a car requires oil — it's simply necessary for the entire system to function properly. However, many people don't realize the importance of iodine for women's health.

Aside from the critical role iodine plays in the thyroid, iodine is essential to women in other ways, especially breast health. Women's breast tissue has a high concentration of and a special need for iodine. When breast tissue has low iodine levels, health concerns can follow. Let's take a look at the top six things you need to know regarding iodine and its impact on breast health.

How Does Iodine Impact Breast Health?

1. Iodine Deficiency is a Concern

Iodine deficiency is a concern that affects up to 40 percent of the world's population, including people in North America. One of the primary causes is inadequate iodine intake.

Food has historically been a source of iodine but this has been in decline for decades. Bread is a perfect example. Until 1980, iodine was used to condition dough, but then bromide was substituted. Bromide is a halogen that offers no benefits and competes with iodine for absorption in the thyroid. Fluoride is another example. It's a common, toxic halogen that's present in many water supplies and negatively affects iodine absorption.

Every cell, organ, and system in the human body needs iodine, and this is doubly true for female breast tissue. Breast tissue has a high concentration of iodine and the same iodine-transporting proteins used by the thyroid gland.[1, 2] In healthy breast tissue, iodine offers antioxidant benefits.[3] Conversely, iodine-deficient breast tissue is susceptible to lipid oxidation, a contributor to many diseases including cancer.[4] [5] [6] [7]

3. What is Fibrocystic Breast Disease?

Fibrocystic breast disease is an extremely common and underreported condition in which hormonally-influenced cysts develop in breast tissue.[1] The cysts, which can cause breast pain and tenderness, especially before menstruation, are fairly easy to detect.

Fibrocystic tissue is most often detected during at-home examinations and are often a source of immediate anxiety for the women who discover them and fear the worst. Although fibrocystic breast disease itself is often benign, the New England Journal of Medicine has reported that it is a risk factor for breast cancer. [8]

Although birth control is sometimes used to shrink cysts, many women prefer to avoid its associated health risks and instead opt for iodine supplementation. Not only is iodine safe, but it also promotes breast health.[12]

6. Iodine is Even More Important When Breast Feeding

A nursing mother needs enough nutrition to support her own needs and to produce milk for her developing child. Iodine is important for breast health and equally important for normal brain development in children. Iodine deficiency is, in fact, the number one cause of developmental concerns. Iodine is crucial for a newborn brain and breast milk is the perfect means for supplying iodine to a nursing infant.[15]

Are You Getting Enough Iodine?

Getting enough iodine is a product of eating foods that contain iodine and, for many people, taking supplemental iodine. There are several forms of iodine, some are more beneficial than others.

There are tests that can determine if you need iodine and if you do, it's best to compare iodine supplements to make an educated decision as to which is the best for you.