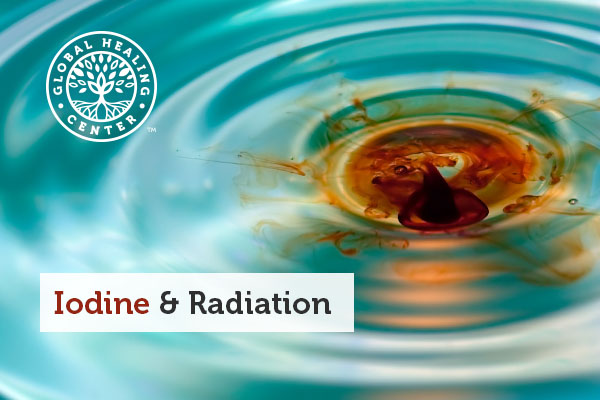 After nuclear disasters like Fukushima and Chernobyl, many people around the world have begun looking into natural ways to protect themselves from the negative effects of radiation - particularly those who reside near nuclear facilities or other problematic sites. This is an item of concern it's better to be prepared for, after a nuclear incident has already happened is not the time to start researching the best ways to protect yourself.

There won't be time and there probably won't be a supply. After a radiological event, radioactive particles may be inhaled or ingested when food and water supplies become contaminated. The thyroid gland is particularly susceptible to radiation poisoning and immediately protecting this gland from injury is of paramount importance. Iodine presents itself as the most effective natural solution for blocking the effects of radiation while also enhancing overall health. It's important to understand that many people are also already severely deficient in iodine. This presents a very serious "perfect storm" when it comes to increased radiation levels and an unprotected individual. Those with already compromised iodine levels who are being blasted with radiation fallout from Fukushima or any other location are already without the very first line of defense.

As many doctors around the globe are finding out, more and more patients are chronically deficient in iodine across the board. Dr. David Brownstein is a well known, board certified, holistic physician who is an expert on iodine and had this to say regarding iodine deficiency in his patients:

"After testing over 500 patients, I found that 94.7 percent of my patients are deficient in inorganic iodine."

It is this widespread iodine deficiency that can be not only detrimental for protection against radiation, but to overall health as well. Dr. Brownstein and others have highlighted in similar research the connection between iodine levels and radiation damage. Brownstein and colleagues have discovered, as a mountain of previous scientific research shows, that high quality iodine actually does not allow radiation to bind. When the thyroid is already full of non-radioactive iodine, the thyroid is less likely to absorb radioactive particles. As a result of this inability to bind, radiation will leave the body without wreaking havoc. Dr. Brownstein explains this effect and how it is important to acquire adequate iodine levels before fallout hits in a written report:

"If there is enough inorganic, non-radioactive iodine in our bodies (thyroid), the radioactive fallout has nowhere to bind in our bodies. It will pass through us, leaving our bodies unharmed. It is important to ensure that we have adequate iodine levels BEFORE this fallout hits."

The Best Type of Iodine

The best form of iodine is known as nascent iodine, which is more efficiently used by the body than an iodine/iodide mix. Known to be gentle on the stomach, have a much purer and gentle taste, and for its ability to be absorbed much easier than potassium iodine, nascent iodine, in my opinion, is the absolute best choice for personal or family use and the only type I recommend.

In the event of a nuclear emergency, such as for protection against Fukushima fallout in the Japan area, just a few servings of nascent iodine may be highly effective. This is what's known as "iodine loading", which is the act of saturating the thyroid with iodine during an emergency. For normal scenarios, replenishing iodine stores and fighting off "regular" radiation levels can also be hugely beneficial. When looking for a high-quality iodine formula, always remember to make sure that it does not contain alcohol. Tinctures made using fillers, additives or harsh components such as alcohol (typically grain) can become compromised on a nutritional level. Instead, a non-alcoholic process for nascent iodine is a better choice to ensure purity and efficacy. To learn more about iodine, in fact, everything you need to know about iodine, check out the video for my webinar, Everything You Need to Know About Iodine.