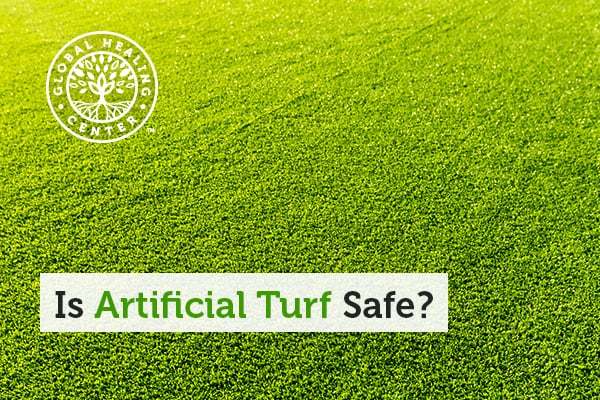 What could be healthier than the sweat on your brow of a great game of football or soccer? Sadly, playing on artificial turf, especially the kind used on college campuses and in the professional sports arena, may be connected to toxic cancerous material.

Recent reports have highlighted the fact that the artificial turf used for many of our sporting practices may contain harmful chemicals that can wreak havoc on our systems [1]. Many people do not realize that artificial turf is just a fancy word for ground-up tire crumbs.

When the Houston Astrodome was built in the 60's, Monsanto came to the rescue when it was too dark to grow grass inside the dome. The infamous chemical company created a plastic minced rubber carpet called Astroturf. Later it was created using tires, and became the norm for both indoor and outdoor sporting fields. The average playing field is fabricated out of 120 tons of minced road tires [2], ground so fine that they release what one observer called, a "small amount of toxic, cancer-causing, mutation-triggering chemicals and metals." Sadly, as with the case of many products approved by the U.S. safety administrations, these rubber playing fields give off dozens of other chemical emissions that are highly questionable in regard to their effects on the human body.

While many sports enthusiasts have applauded the turf for being more convenient than grass, as well as more pliable and safe for sporting events, we really must consider the fact that our strong, able-bodied players are breathing in toxic gasses. Furthermore, do we really want our children to play and roll around on the same blackened road tires we get rid of on our cars?

Patti Woods, of Grassroots Environmental Education, explains why artificial turf can be so problematic:

"Tires typically contain toxic substances which prohibit their disposal in landfills and oceans, so it is reasonable to question whether this material is safe for use on fields where children play."[4]

What is truly disturbing is that the State Department of Public Health has claimed that the chemicals in fake turf are no big deal. This doesn't surprise me given the fact that the sports business is a multi-billion dollar industry. No one wants to think that the players on their favorite teams are breathing in toxins out on the playing field. Furthermore, the tire industry couldn't be happier with finding a lucrative way of getting rid of used tires, given that they are so toxic that they are oftentimes rejected at landfills. Despite the "a-okay" from the Public Health department, many environmentalists, sports players, media and policy makers are wondering how safe these artificial turfs can be. Especially when we consider that the average sized playing field could be emitting gasses from over 26,000 minced tires. Representatives from the Occupational & Environmental Health Center at the University of Connecticut have found that artificial turf may cause a risk to young people, children, and babies. This information comes to us at the same time that toxic chopped tires are being introduced as ground material for parks and children's indoor and outdoor playgrounds. Tire manufacturers are really cashing in, with each children's artificial-turf playing field costing a whopping $500,000 to $1 million dollars each! The Connecticut Agricultural Experiment Station believes that if a child were to consume a mere 10 grams of the rubber crumbs, it would be over what most states call, "the cancer risk threshold." [5]

European countries such as Sweden have recommended that the rubber crumbs used to keep the field pliable, not be used at all in new installations, stating that the substance is hazardous to health. The Italian Ministry of Health has similarly found that artificial turf may contain carcinogenic substances [6].

The Connecticut Agricultural Experiment Station looked into the actual composition of minced tires and found a whole host of chemicals that, when breathed in by human beings, may be causing detrimental effects on our bodies. A few of the chemicals "leached" by mincing tires includes carbon black, benzothiazole, butylated hydroxyanisole, hexadecane, lead, cadmium, and 20 other volatile organic compounds.

A recent move by concerned individuals in Massachusetts is debating on the safety of crumb rubber pellets used in artificial turf. Considering that there is evidence these ingredients could be a carcinogen, it is all too important for this issue to be addressed. [7] Arsenic and benzene are commonly found in these pellets, and contact, even briefly, may increase cancer risk. [8]

Measures You Can Take to Protect your Children

If you or your children are playing on artificial turf, take some simple measures to reduce your toxic intake. Below are a few things you can do to protect your family.

These small measures will help minimize risks to toxic rubber crumbs. Encourage your school systems, parks administrations and policy makers to avoid contracts with retailers that install rubber crumbs and remove them from their facilities.