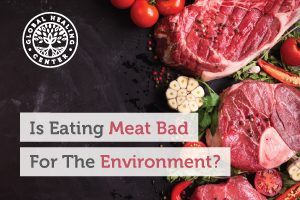 We've all heard the debate about eating meat and how it may have a negative effect on the environment. Here are a few reasons why eating an excessive amount of meat may be causing more harm to our planet than good.

The Effects of Meat Production on the Land

Grazing land is often had by means of deforestation and has pushed a number of species to the brink of extinction. Even livestock raised using "factory farming" techniques create the same strain on the environment due to the massive quantity of grains necessary for animal feed [1].

The impact of meat consumption may be most obvious in South America where large portions of tropical rain forest have been leveled for grazing. Some sources estimate up to 90% of all deforestation is the result of poorly managed and unsustainable ranching practices.

The Effects of Meat Eating on the Water Supply

Commercial meat production puts a heavy toll on land and uses incredibly large quantities of water. It requires eight times as much water to grow a cow as to grow a cow's weight in rice or soybeans; and those two crops require significantly more water than other popular grains such as wheat or corn. To illustrate, the average beef cow will use about 30 olympic-size swimming pools worth of water before it goes to slaughter. The huge quantities of animal waste runoff produced by these operations leeches into the water supply and affects the natural aquatic life cycle. Livestock manure is rich in nitrogen, phosphorous, and other fertilizers. These chemicals eventually work their way into our stream, rivers and then carried out to sea. The ever increasing "dead zones" now found in coastal regions throughout the world are caused largely by algae overgrowth, or blooms, which are spurred by the unnatural high levels of fertilizer.

The Effects of Raising Meat on the Air Quality 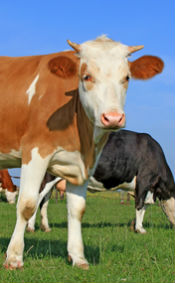 Raising animals for food has an impact on air quality too. The equipment used to grow, process and ship meat requires energy, much of which comes from burning fossil fuels. In many cases farming and ranching practices are less strictly regulated than other less rural industries but their emissions output is comparatively high.

It may sound silly, but methane released from cattle burps and farts account for 20% of all methane emissions in the United States.[2] When combined with emissions from fossil fuel consumption, they account for six percent of total U.S. greenhouse gas output.

But I love eating meat! What can I do to help?

If you want to do your part to protect the Earth, but still want to enjoy a good barbeque now and then, consider offsetting your diet's environmental impact by making smarter consumer decisions and moderating your consumption habits.

Livestock raised on sustainable, organically-certified land requires significantly less fossil fuel than regular commercial meats. Cutting meat out of your diet just one day a week can do more to reduce your carbon footprint than switching to a hybrid car. There is even an international campaign called 'Meatless Monday', that encourages people to give up meat at least one day a week to help improve health and environment.

I personally recommend reducing or eliminating your meat intake. This will help the environment and do wonders for your health. Try following a raw food diet, or just increase the overall amount of raw fruits and veggies in your diet. You will notice a difference.