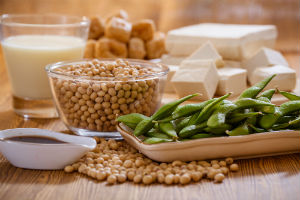 Soy milk, soy cheese, soy crisps — there is a booming market for vegan soy-based foods and a lot of supposed health authorities touting its alleged benefits. What if soy was actually a wolf in sheep’s clothing and only called a health food because its supply was so abundant? What if soy was actually not as healthy as the marketing wizards tell us? As it turns out, that’s exactly what the data suggests. Let’s pull back the curtain and shine a light of truth on soy.

Is Soy Good or Bad for You?

Soy is said to benefit everything from heart disease to menopause. But is soy a true "miracle food," or just a bunch of hype? Many products in the United States contain soy because soy is subsidized by the US government. Soybean oil, soy protein, and soy lecithin are common ingredients in processed foods due to the sheer volume and availability of soy. It turns out that conventional soy may actually harm reproductive health, according to some studies.

Why Fermented Soy is Better

Soy is also believed to play a role in the long, healthy life span enjoyed by the Japanese people. However, this doesn’t take into account other factors such as green tea, more regular exercise, and smaller food portions. Not to mention the fact that the Japanese largely consume fermented soy, which is very different from the soy found in the modern American diet. Fermented soy milk, tofu, miso, soy sauces, tempeh, and natto can actually offer a lot of health benefits.

Fermentation reduces enzyme inhibitors and makes soy's nutrients more available. [1] Soy milk that has been fermented may also have a positive effect on blood lipids. [2] Unfermented soy products in America are deficient in isoflavones and rather loaded with toxins that can block the enzymes needed for protein digestion.

Most soybeans today are also genetically modified and sprayed with pesticides. This introduces a plethora of toxins that block the healthy absorption of essential minerals.

How to Avoid Conventional Soy

As mentioned earlier, soy is in everything. Switch to a whole foods diet and eliminate processed food, as much as you can. Watch out for products that contain lecithin, MSG, or "natural flavors" as that's often a code word for soy. Avoid soy milk, especially if you are male. Do not feed soy-based infant formulas to your children; breastfeeding is a much better choice. Be careful of the foods that you purchase: soy meat substitutes might be obvious, but soy can be found in unlikely places like salad dressings, mayonnaise, and margarine. Read your labels carefully.