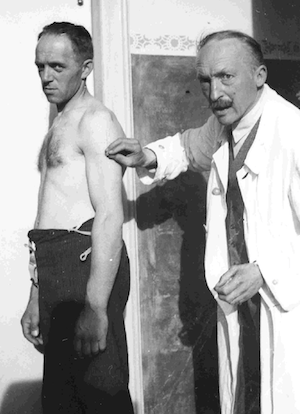 It is an Honor for Global Healing to release this valuable health information to the public through a new blog series called Natural Medicine Secrets Revealed. I highly recommend exploring the information and spreading it far and wide.

What is the Calligaris Method

Born on October 29, 1876 and thought to be a natural clairvoyant, Giuseppe Calligaris was an Italian neurologist who discovered a grid of lines and points on the skin similar to reflexology. Zone therapy, as it was described, includes emotional, psychic and organ reflexes. It was not the nervous system, vascular system or acupuncture meridian systems that he found or was duplicating. But an entirely different system that overlapped other systems. Everything existing outwardly throughout the universe was mirrored within and upon our human body. Along the reflex lines, Calligaris discovered thousands of small skin areas, called plaques. During his lectures, Calligaris would demonstrate how stimulation of these points, repeatedly and on different subjects, allowed them to receive a television-like view of the universe, and they were able to describe objects outside of view.

How the Calligaris Method Works

Find an approximate location on the body and mark the corresponding zone line with a pen. In the approximate location, lightly rub a cold metal object such as a spoon across the zone line or lightly tap with a small metal hammer. A light electric current can also be used. You will have located the plaque when you notice a distinct sensation of coolness, mark this. It may be necessary to periodically cool the metal device, cold water works well.

Take a metal cylinder of the specified diameter and move it lightly in a fast circular motion on the marked spot. The cylinder must be smooth and have clean, slightly rounded edges. It should touch the skin but not dent it. The amplitude of the rotary motion should be only a fraction of a millimeter. Slightly faster results can be had by using a Faraday brush to provide a weak electric current.

After five to 30 minutes the plaque is sensitized and the tested person should experience several sensory reflexes. The sensations may be light and the person being tested should be told what to look for. There are typically three reactions, although it's not uncommon to only experience two. After experiencing one or two sensations, keep the cylinder still, but continue to hold it very lightly on the plaque and cover the eyes of the tested person with a black cloth. Within 5-15 minutes, the target sensation should emerge. The more the method is performed, the quicker the sensations will appear. Do know that occasionally, for unknown reasons, the plaques do not respond.

Using the thumb and index finger, press the tip of the middle finger of the person being tested. Alternate pressure on their finger tip and nail using quick, light pressure. This will sensitize a line from the tip of the middle finger along both sides of the arm to the shoulder. Continue the stimulation to activate additional lines. The person being tested may experience a tingling sensation. Some people will not feel the sensation unless the lines are retraced with a cold metal object.

Lines start at the tip of every finger and toe, as well as between them, these lines correspond to various organs and systems in the body. If you hold the tip of a finger so that a light pressure is exerted just below the nail and at the finger pad, the line starting at the finger will become sensitive. When the cold metal object is gently rubbed across the line, a cooling sensation should be felt along the line. 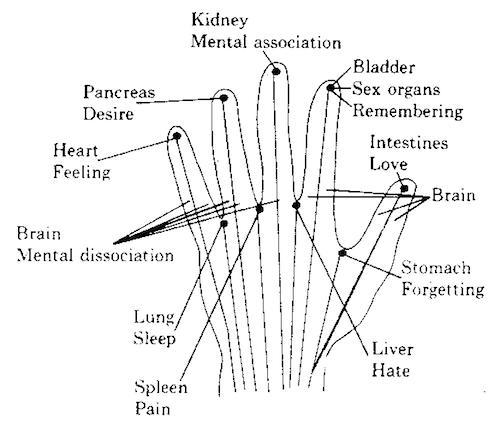 The Calligaris Method may be used to increase psychic awareness. Using a small magnet, place the tip of either middle finger on the south pole. Be gentle, as only very light stimulation is necessary. Visions of the past, present, or future, may be experienced after 5-30 minutes of stimulation to the finger. The visions will often appear cloudy and become more clear with increased stimulation. Most people have said that the visions must be accepted in a passive fashion and not "focused on too hard."

Sensitize a plaque about 3 cm below the right kneecap and 5 mm to the right of the midline. The person being tested should experience movement of the lips, burning in the back, or joint stiffness in the knees, hips, or feet. In this sensitized condition any diseased organs will emit an increased amount of radiation that can be felt by slowly moving the left hand (left handed persons should use their right hand) about 20-30 cm over the body. A diseased organ will be felt as coolness or tingling in the hand.

Microbes responsible for an infectious disease may be projected onto the skin of the patient. Sensitize a plaque at the inside of the left wrist-fold, from the midline slightly towards the thumb. Pain in the ears and lower arms, or a feeling of heat are the expected reflexes.

The projection may appear on the middle of the right upper arm, covering an area of about 9 X 6 cm. The picture may appear clearer if you use an astringent cream or lotion. Cancer is indicated by a sphere covered with hundreds of prickles, which Calligaris called spherula dentata. Sometimes the picture of a microbe appears in stylized form. 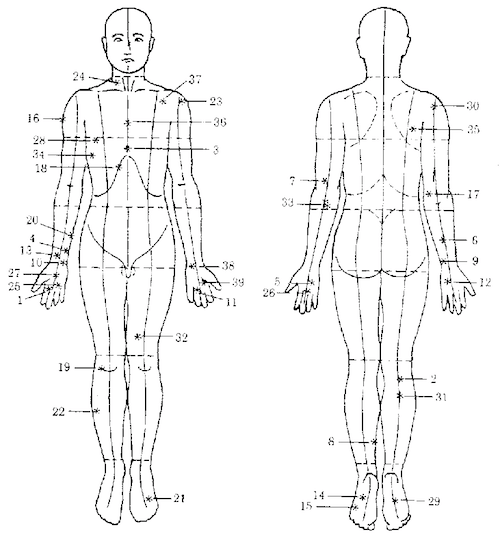 The following plaques may be easier to find and sensitize for beginners. The following compilation gives the identification number of the plaque as shown in the diagram, then the name or main effect of the plaque, size (also the diameter of the cylinder needed for stimulation), and expected reflexes.

Much of Calligaris' research material was destroyed or confiscated by the government. His books are extremely rare and the majority is written in Italian and has not been translated. Only one lecture pertaining to his work has ever been given in English and it is available at the World Research Foundation. Several Italian academic libraries possess copies of his books but government decree prevents their being lended or copied. In more recent years, efforts have been made, particularly in Europe, to discuss and revive Calligaris' work.

Jules Muheim of the Swiss Technical University of Zurich said of Calligaris, "One has to add him to the greatest scientists of this century. Calligaris found that, with continuous, tender pressure on several spots of the human body . . . that not only the familiar physical feelings such as warmth/cold, tickling, itching, salivation, aches, and other sensations were generated, but emotional feelings including distortion of time and local-moving (space) within cosmic dimensions became possible."