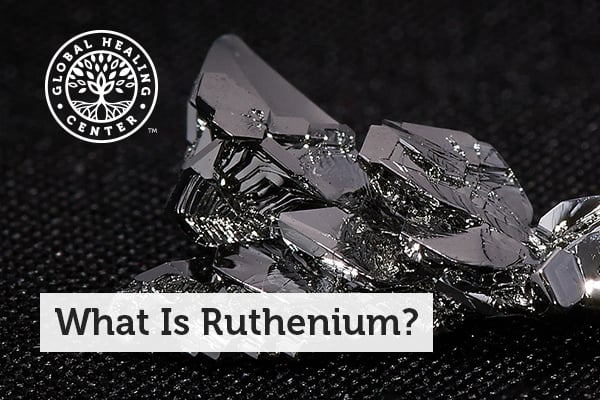 Ruthenium is a hard, metallic, chemical element that is commonly found as a rare earth metal. Ruthenium’s atomic number is 44 and its atomic weight is 101.07. It is greyish-white in color and a member of the platinum family.[1] At only about 0.0004 parts per million, ruthenium is one of the rarest elements in the earth’s crust.

For such a rare element, ruthenium has a lot of uses. In metallurgy, it's used as a hardener and alloyed with platinum and palladium. The electronics industry uses ruthenium alloys to make water-resistant electrical contacts.[1] The chemical industry also has an interest in ruthenium. Its oxidized form, ruthenium(IV) oxide, is used to produce chlorine and chlorine oxides.[2] Ruthenium even plays a role in human wellness.

How Ruthenium Relates to Health

All life requires certain basic elements — carbon, hydrogen, nitrogen, and oxygen. For the human body to function properly, it also requires certain metals such as sodium, potassium, magnesium, calcium, iron, zinc, selenium, and others.[3] Making sure your body gets enough of these elements can sometimes be a concern. The body needs these elements in specific quantities. Too little leads to deficiency and too much can be toxic. Sodium toxicity[4], potassium toxicity[5], and iron overdose [6] are some examples of what happens when your body’s metals are out of balance.

The importance of moderation cannot be stressed enough, as ruthenium itself can easily become toxic if ingested in large quantities.[7] You should consult your healthcare practitioner before starting any new supplement protocols.

Many metals are toxic to humans even though they exist naturally in the earth. Some toxic metals include arsenic [8], cadmium [9], chromium[10], lead [11], and mercury [12]. Even in tiny quantities, these elements cause significant harm to your body. [13]

Ruthenium (or ruthenium-based compounds) can help serve as blocking agents to keep the harmful metals from circulating in your body too freely.[14] This isn’t the only role ruthenium can play in promoting wellness.

Although not conclusive, some research has evaluated ruthenium complexes for their prospective use in the fight against cancer.[15] Many cancer treatment methods have shown a tendency to be inconsistent and unsuccessful. The quest for more effective treatments has lead to ongoing experimentation and new approaches based on the platinum family are being tested.

Ruthenium complexes have a DNA-binding mode that seems to have produced positive anti-tumor effects in some situations, even being resistant to some tumors.[16] Despite its toxicity when taken in excess, ruthenium can still be beneficial to a person’s wellness.

Our Approach to Wellness

There are many factors that contribute to physical health and total wellness. Ultimately, it boils down to whether the body has the ability to do its job. The body has incredible self-healing mechanisms but they can’t function without proper nourishment and care. Encourage your body to reach its maximum potential by following a healthy diet, exercising regularly, and performing regular body cleanses. Don't despair if your body is less than optimal right now. Proper care can get back to normal and boost full-body wellness. That’s what healing means to me!