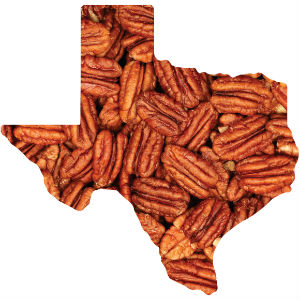 Pecans and Texas go way back. In fact, here in the Lone Star State, we honor the pecan tree as our State tree. In 2013, Texas even made pecan pie the official State pie. [1] And speaking of pecan pie, check out this vegan pecan pie recipe we’ve shared just in time for the holidays!

A Brief History of Pecans

The name "pecan" is thought to have come from the Algonquin tribes, or maybe the Natchez. The pecan tree itself goes back at least 8,000 years in the state of Texas. In scientific circles, it goes by the name Carya illinoinensis, and is actually a relative of the walnut. Interesting enough, the pecan tree is more closely related to the hickory than the walnut. If you’re into trees, you might know the term "pecan hickories." [2] According to America’s earliest recorded history, Native Americans in our area planned a great deal of their movement around the maturity of pecans throughout the year. And for good reason. They depended on the nut as a primary food source for the four winter months every year. By the 19th and early 20th centuries, we’d planted enough pecans throughout the state that we were able to start exporting them around the world. By the time of the Depression, up to 15,000 people were employed shelling pecans in San Antonio alone. Those jobs lasted until 1938 when Congress passed the Fair Labor Standards Act. The mandatory wage increase made it impossible to employ so many people, so to stay viable, the industry found it cheaper to automate and replace the manual labor with machines. [3]

Growing Your Own Pecans

If you’re thinking of growing your own pecan tree, there are a few things you ought to know: One, your tree needs attention. There are a number of different varieties, but critters, fungus, and cold weather don’t treat pecans well. Pecan trees grow tall, so make sure they have a lot of space. As a general rule, the more leaves your tree has, the bigger the pecan nut will be. But some trees just produce small nuts.

If you want to know more about how to grow pecan trees, the Texas A&M University Horticulture Extension is a great resource.

The USDA has acknowledged that the fruit of our home state’s Official State tree, the pecan, has the highest antioxidant value of any nut. It’s also loaded with more than 19 vitamins and minerals, and heart-healthy omega-3 fatty acids. Simply stated, the pecan is packed with nutrition.

How Can You Benefit from Consuming Pecans?

Now, maybe you’ve heard nuts like pecans will make you gain weight, but this is just completely false. In fact, the Harvard Gazette reports that studies going back 50 years and recent research agree that people who eat nuts regularly lose weight faster and tend to do a better job of staying trim than their counterparts who don’t indulge in nuts on a regular basis. [4]

How many calories are in a serving of pecans? About 200. While that may seem like a lot, the health benefits of pecans are off the charts. The nutrients in pecans:

Despite the fact that they aren’t a 0-calorie food, decades of research even suggest that pecans will help you lose weight and keep it off! [5]