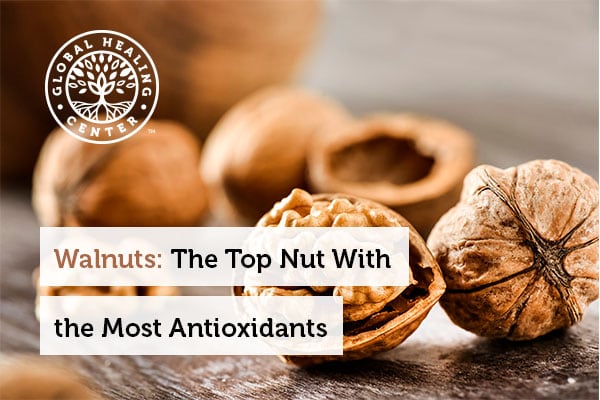 Walnuts are perhaps best-known for being the quintessential healthy brain-food. But who knew that walnuts were also winning top prizes for their heart-healthy, free-radical fighting, antioxidant properties as well?

Recent scientific evidence shows how the walnut may be one of the number one foods for heart-healthy antioxidant support. A study out of the University of Scranton assessed the nutritional and antioxidant qualities of 9 varieties of nuts, with walnuts ranking number one over other healthy nuts, like almonds, pecans, peanuts, and pistachios.[1] Just a handful of walnuts holds two times more heart-healthy antioxidants than all other commonly-purchased nuts.

In a 2011 talk given at the 241st National Meeting & Exposition of the American Chemical Society in California, scientists involved in the study offered further explanation.[2] It turns out that walnuts contain a unique mix of free-radical neutralizing antioxidants and the highest quality of antioxidants of all nuts tested. The study analyzed both the amount and quality of antioxidants found in walnuts, almonds, peanuts, pistachios, hazelnuts, Brazil nuts, cashews, macadamias, and pecans.

The study was direct and conclusive: Walnuts contain the highest amounts and the strongest potency antioxidants, compared with other commonly eaten nuts. The study also found that the walnut has up to 15 times more antioxidant potency than vitamin E, an oil known for its strong antioxidant effects. This suggests that walnuts may play a role in preventing us from getting diseases that are linked to free radicals.

What the Walnut Has That Other Nuts Don't

Because of these incredible health benefits, the scientists conducting the study encourage us to include more walnuts in our diet. The best way to eat them is in-the-raw and organic, as we can reap most of the antioxidant benefits this way. In fact, years of research by other scientists suggest that regularly eating small amounts of nuts, such as walnuts, is associated with lower levels of heart disease, blood sugar issues, gallstones, and other serious health conditions.

Professor Joe Vinson, the scientists who did the study, explained in a statement to the American Chemical Society:

"A handful of walnuts contains almost twice as much antioxidants as an equivalent amount of any other commonly consumed nut. But unfortunately, people don't eat a lot of them. This study suggests that consumers should eat more walnuts as part of a healthy diet.”

Vinson adds that you should eat raw walnuts – or other raw nuts – to get the full benefit of their antioxidants. “There's another advantage in choosing walnuts as a source of antioxidants. The heat from roasting nuts generally reduces the quality of the antioxidants."

Vinson’s research shows that nuts make up only 8 percent of the antioxidants found in the average person's daily diet. This may be due to a lack of awareness around their health benefits, but may also come from the myth that you should avoid nuts because they are high in fat and high in calories. The truth is that the fats in nuts are high in healthy forms of polyunsaturated and monounsaturated fats – the kinds that do not clog your arteries and are good for your health.

According to Vinson, you only need seven walnuts a day for the antioxidant health benefits discovered from his study. And yet, most people are not eating enough nuts on a regular basis.