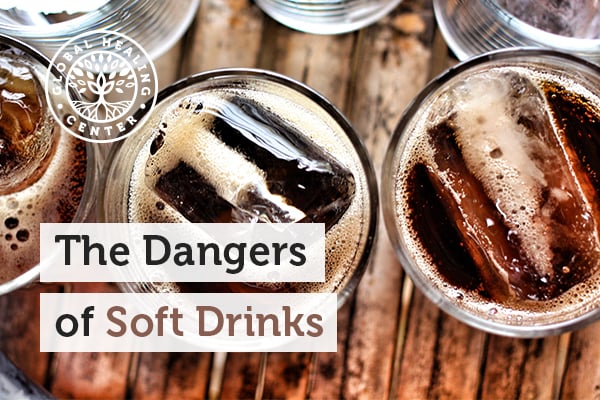 I’ve written before about the dangers of soft drink addiction… which sounds like it could even be a joke. How many times have you heard someone refer to themselves as a “cokeaholic”? The truth is, soda addiction is no laughing matter. The chemicals in soft drinks are not only habit forming, but highly addictive. And that’s exactly what the big soda companies want. Let's take a deeper look at some of the negative health effects of soda.

Is Soda Addiction a New Concern?

Back in 2002, Dr. Judith Valentine, Ph.D described the concern with soda in her article “Soft Drinks: America’s Other Drinking Concern.” [1]

“Huge increases in soft drink consumption have not happened by chance — they are due to intense marketing efforts by soft drink corporations. Coca-Cola, for example, has set the goal of raising consumption of its products in the US by at least 25 percent per year. The adult market is stagnant so kids are the target… Influencing elementary school students is very important to soft drink marketers.”

“Since the 1960's the industry has increased the single-serving size from a standard 6-½-ounce bottle to a 20-ounce bottle. At movie theaters and at 7-Eleven stores the most popular size is now the 64-ounce ‘Double Gulp.’”

“According to the National Soft Drink Association (NSDA), consumption of soft drinks is now over 600 12-ounce servings (12 oz.) per person per year. Since 1978, soda consumption in the US has tripled for boys and doubled for girls. Young males age 12-29 are the biggest consumers at over 160 gallons per year — that’s almost 2 quarts per day. At these levels, the calories from soft drinks contribute as much as 10 percent of the total daily caloric intake ...”

So you decide to be responsible and limit the amount of soda your family consumes. Well, big soda has ways to deal with troublemakers like you. They’ve taken steps to cut you out of the equation and peddle their product directly to your kids, ensuring they get the full effect - addiction and all - at a young age.

How to Sell Soda to Children

“Soft drink companies spend billions on advertising. Much of these marketing efforts aimed at children through playgrounds, toys, cartoons, movies, videos, charities and amusement parks; and through contests, sweepstakes, games and clubs via television, radio, magazines and the internet. Their efforts have paid off.”

Have you noticed your kids' school has more soda machines than yours did when you were a kid? There’s a reason for that, and it’s ugly – the major soft drink companies are targeting schools. Since the 1990’s, most schools in the United States have had to deal with painful budget cuts. They must decide between slashing programs or selling out to marketing campaigns. It's common for schools to have exclusive contracts with major soda companies that doesn't include healthy alternatives to soda, like coconut water.

“In 1998 the Center for Science in the Public Interest (CSPI) warned the public that soft drink companies were beginning to infiltrate our schools and kid clubs. For example, they reported that Coca-Cola paid the Boys & Girls Clubs of America $60 million to market its brand exclusively in over 2000 facilities. Fast food companies selling soft drinks now run ads on Channel One, the commercial television network with programming shown in classrooms almost every day to eight million middle, junior and high school students. In 1993, District 11 in Colorado Springs became the first public school district in the US to place ads for Burger King in its hallways and on the sides of its school buses. Later, the school district signed a 10-year deal with Coca-Cola, bringing in $11 million during the life of the contract. This arrangement was later imitated all over Colorado. The contracts specify annual sales quotas with the result that school administrators encourage students to drink sodas, even in the classrooms.”

Consequences of These Decisions

As you may guess, allowing children unrestricted access to liquid candy is not without health consequences.

“We as practitioners and advocates of a healthy lifestyle recognize that consuming even as little as one or two sodas per day is undeniably connected to a myriad of pathologies. The most common health risks are obesity, diabetes and other blood sugar disorders, tooth decay, osteoporosis and bone fractures, nutritional deficiencies, heart disease, food addictions and eating disorders, neurotransmitter dysfunction from chemical sweeteners, and neurological and adrenal disorders from excessive caffeine.”

And that’s not all. Forty-four grams of high fructose corn syrup per serving is bad, but “sugar-free” diet soda is even worse. Diet soda usually contains the artificial sweetener aspartame. Aspartame is a dangerous chemical and neurotoxin that metabolizes into formaldehyde and, in my opinion, is one of the worst artificial sweeteners on the market.

If pushers of liquid candy and hazardous chemicals have already infiltrated our schools, what options do we have? Dr. Valentine explains:

“One good idea comes from the Philippines, a country where malnutrition is an ominous health threat. A recently devised plan there would allow citizens to cash in on the country’s ‘junk food diet’ by taxing every liter bottle of carbonated soft drink sold. If the US taxed soft drink sales, the new income stream generated could then be distributed to declining school budgets. Is this not a better idea than forcing our schools to sell their souls to soft drink companies under the titanic sink of fiscal degradation?”