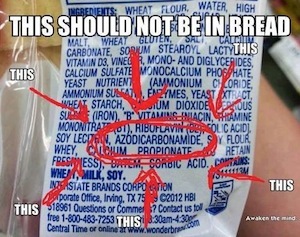 The recent revelation that Subway bread contains azodicarbonamide has gotten a lot of attention.  And it should, azodicarbonamide is an industrial chemical used to make yoga mats, shoe rubber, and synthetic leather. Although there's no reason for it to be in bread, it has, in fact, been used for decades as a dough conditioner.  However, the public backlash was so great that Subway has stated it will cease to use azodicarbonamide... although they stopped short of providing concrete deadlines as to when, so be aware.

But still, what is azodicarbonamide?  And what are the health risks associated with exposure and consumption? Because it's used to make foamy yoga mats, rest assured it isn't safe to consume, and the next 9 facts will explain why.

1. Azodicarbonamide is an Industrial Chemical

The primary function of azodicarbonamide is centered on the way it breaks down during processing – it creates tiny bubbles that make things "foamy." Somewhere in the testing procedures, scientists discovered it whitened flour and acted as an oxidizing agent. Bakers, or rather "food scientists" soon concluded that it should be a standard inclusion in bread.

2. Azodicarbonamide Increases the Irritability of Gluten

Gluten has been linked to a host of gastro-intestinal, immunologic and neurologic diseases. [1] [2] If you take it a step further, gluten is irritating to gluten intolerant bodies because it contains two proteins, glutenin and gliadin, which those body's struggle to process. When bread dough is treated with azodicarbonamide, it can break down the gluten and make glutenin and gliadin more immediately available.

3. Azodicarbonamide Can Cause Respiratory Concerns

Research has established a direct link between exposure to azodicarbonamide and the onset of asthma. [3] According to a World Health Organization (WHO) follow-up report, regular occupational exposure to azodicarbonamide can lead to asthma and allergies.  The WHO report notes many of those who developed asthma and other respiratory complications experienced symptoms within just three months of exposure. [4]

4. Azodicarbonamide is a Skin Irritant

The WHO report also noted physical exposure to azodicarbonamide caused recurring dermatitis. [4] Fortunately for those suffering, eliminating exposure caused the indications of the dermatitis to go away.  While this is good news, these results show how quickly industrial chemicals can initiate an autoimmune response.  Unfortunately, skin irritation seems to be the least of concerns…

While azodicarbonamide is used to condition bread dough, when it's baked, the heat causes it to break down. Two by-products can result: semicarbazide and ethyl carbamate.  Semicarbazide belongs to a family of chemicals known as hydrazines that are especially carcinogenic.  A 2003 study using animal models found that it caused free radical damage to DNA. [6] Other studies have found that semicarbazide damages human immune cells and the DNA of animals. [7]

The other half of the gruesome twosome is no better. The National Institute of Health’s Hazardous Substances Data Bank states that ethyl carbamate is a carcinogen to animals; in fact this is backed by over 200 studies. [8] [11] Research from 17 years ago confirmed that adding azodicarbonamide to bread increased ethyl carbamate levels. [12] The awful truth is that industry has known for nearly two decades that this is toxic trash and fed it to us anyway.

Exposure to semicarbazide can present another health risk. Animal studies have found it has a toxic impact on hormone function and the hormone-regulating organs, including the thyroid, thymus, spleen, testes, ovaries, and uterus. [9] [10] As is the case with all endocrine disrupting compounds, this stuff is poison!

8. Europe and Australia Have Banned It

While US Officials continue to claim the amount of azodicarbonamide found in most baked products poses no serious health threat, European and Australian officials have banned its use in bread.  Baby food jars were another source of exposure and officials were left without answers concerning the "safe levels" for infants. [13] Consequently, European officials disallowed its use in sealing glass jars.

9. Subway is Not the Only Violator

"Health officials" may claim this trash is safe in low doses, but who’s monitoring exposure?  And let’s face, at any level a toxin is a toxin.  If it doesn’t contribute to health, it’s taking away from it.  As I’ve said for years, disease happens when toxic buildup in the body becomes too great. The best approach for encouraging good health continues to be eating a diet of natural, organic foods from trusted sources and regularly detoxifying your body.