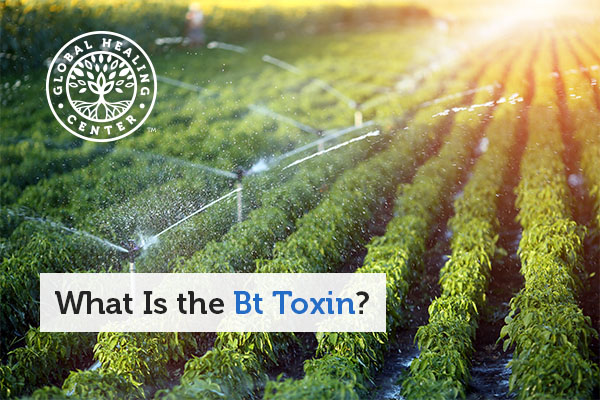 Unfortunately, modern farming has fully embraced the use of harmful pesticides and herbicides to control unwanted critters and weeds. Synthetic chemicals have largely been responsible for accomplishing the task but the agricultural industry has more recently started a biological warfare campaign against insects with an organism known as Bacillus thuringiensis, or the Bt toxin.

What is Bacillus thuringiensis?

Bacillus thuringiensis (Bt) is a bacteria that produces proteins which are toxic to insects. Bt’s extreme toxicity comes at no surprise. It’s in the same family of bacteria as B. anthracis, which causes anthrax, and B. cereus, which causes food poisoning. [1]

What is Bt Used For?

Bt is toxic to many of the insects that can disrupt a farming operation. It’s widely used as a biological pesticide and, in fact, Bt is the most widely used biological pesticide in the world. Bt application can happen one of two ways – Bt can be sprayed on crops or it can be added to the DNA of genetically modified crops. Neither method is positive for health or society, but the second is quite interesting in that it actually embeds a self-contained pesticide within the crop. If a bug eats corn that contains Bt, the bug dies – simple. In the United States, Bt use is widely used on corn, cotton, and potatoes, among other crops, and it’s been pushed as a less dangerous alternative to harsh chemical pesticides. [2]

Perhaps part of the reason for the push is that Bt can be cheaply produced. This has lead to a peanut gallery of industry yes men who are eager to chant, “it’s safe, it’s safe!” despite a widely held belief that the safety of Bt has not been verified. [3] In fact, many experts believe that Bt is not safe at all.

The Dangers of Bt Toxin

Bt does not kill insect larvae by smothering them with love and hugs. Bt is an aggressive toxin that damages cell membranes and kills insects by, literally, making their stomach burst. This has caused some researchers to examine the negative effects Bt toxin may inflict on human health... and the negative effects are many. Bt's aggressive mechanism harms the digestive system by effectively attacking normal gut cells thereby burning holes in the intestines. This can cause concerns such as leaky gut syndrome. Even worse, Bt doesn’t exit your body with the unused remnants of the food it entered with.

Research has shown that the Bt toxin persists in the gastrointestinal tract of human-flora-associated rats weeks after exposure. [4] Research has shown that Bt has a toxic effect on the lungs and other organs. [5] In rare cases, Bt can even wreak havoc on the eyes, causing severe irritation and even blindness. [6]

How Does Bt Exposure Happen?

Exposure to Bt is a major concern for agricultural workers who handle chemicals that contain Bt. In a study that evaluated greenhouse workers, it was found that nearly half had Bt in their fecal samples. [7] One of the biggest concerns with occupational Bt exposure is that, despite causing serious lung damage, it does not irritate the airway when it’s inhaled. It’s been reported that many people who are subject to occupational exposure do not wear protective masks. [8]

The Food You Eat Probably Contains the Bt Toxin

If Bt is the most widely used biopesticide in the agricultural industry, does that mean it’s found in the food we eat? Yes, it means exactly that. If you’re eating GMO or non-organic food, there’s a good chance you’re consuming Bt. Research has repeatedly confirmed that Bt insecticide residue can remain on fresh fruits and vegetables. [9] [10]

Unfortunately, Bt toxin exposure is not limited to raw fruits and vegetables and you can’t wash it off. In 2006, researchers found the Bt toxin in pasteurized milk, ice cream, juice, and green-tea, suggesting that the toxic bio-pesticide residue lingers through multiple stages of food production. [11] Additionally, GMO foods are digested more slowly and when they contain Bt, the sustained exposure puts the digestive system at risk for additional damage. [12]

Because of Bt’s relation to B. cereus, an organism frequently responsible for food poisoning, it too has been fingered as a potential source of food poisoning. After analyzing over 49,000 food samples, the Danish Institute for Food and Veterinary Research found that when B. cereus is present, it’s often because of Bt. [13]

Does Bt Toxin Damage the Environment?

Bt helps to perpetuate another major concern – the development of pesticide resistant organisms. Resistance is an inevitable and unstoppable evolutionary response to stress. The insecticides of today are not the insecticides of yesterday. Newer, stronger stuff needs to be used to do the job and, regardless of the effort, superbugs continue to evolve to stay ahead of the curve, this is incredibly bad. Researchers at the Department of Entomology and Nematology at the University of Florida warn that effective pesticides are limited and should be reserved for emergency situations such as an unexpected pest population outbreak. They should not be used as standard protocol – which, presently, is exactly how they are used. [14] The declining bee population is another major issue which many scientists link directly to GMO foods and the Bt toxin. Without bees, our future does not look bright.

Reduce Your Exposure to the Bt Toxin

Let’s be very clear – Bt toxin is an aggressive, toxic poison. It kills bugs dead and it kills them with an angry vengeance. Regardless of the propaganda slang by the biopesticide industry, research and common sense both indicate that Bt is not at all good for your health. Detox your body from GMO’s today and do what you can to stop Monsanto from killing our ecosystem and food supply!