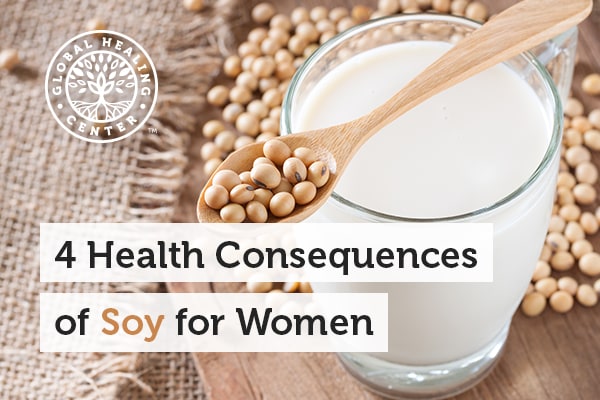 Soy milk is heralded as being a healthy alternative to dairy, with many proponents noting its low levels of saturated fat and absence of dietary cholesterol. Despite these claims, soy contains phytoestrogens, compounds that can disrupt hormones. Women in particular are at an increased risk from the many hormone-disrupting substances found in soy. A woman’s monthly cycle is carefully monitored by her endocrine (glandular) system, and anything that interferes with this system can have far-reaching and devastating effects. Soy contains isoflavones that act as estrogen mimickers, an aspect that can have both positive and negative effects. As a result, a diet high in soy can severely harm a woman's health, both in the short and long term.

Possible Concerns of Soy for Women

While the hype around soy continues to retain a strong hold in the health food industry, very few organizations are speaking out about its ill health effects. Fortunately, an increasing number of independent researchers are beginning to step forward, voicing their issues with this popular food. Here are the top health concerns of soy consumption related to female health.

While increasing one’s libido through soy consumption may sound ideal, particularly for women who are experiencing a diminished sex drive, one reported case may change your mind. Constant sexual arousal often results in patients needing to please themselves (for lack of a better phrase) multiple times a day, usually to the point of pelvic pain. It turns out that these patients, uncommon as they are, derive no pleasure from the experience and are often less likely to come forward for treatment. A case of a 44-year old woman experiencing persistent sexual arousal discovered that her recent soy regimen was the culprit behind the disorder. Once the soy was removed, the condition resolved.[1]

Infertility is a growing concern among men and women alike, and more and more couples are finding that it is difficult or impossible to conceive. In England, about 1 in 6 couples have trouble conceiving, with some researchers relating this rate to the ever-increasing pervasiveness of endocrine disruptors in the environment.[2] Women who consume a hefty amount of phytoestrogens – estrogen compounds naturally found in the soy plant – may battle infertility.[3] Studies now show that soy can reduce a man's sperm count, directly affecting his ability to father children. Unfortunately, there are no tests to determine if soy might be the cause of infertility. Nonetheless, if you and your partner are having trouble conceiving, you both might consider removing soy from your diet.

Girls as young as 6 have been reported as experiencing early-onset puberty. Tragically, this case is no longer considered highly unusual. The age of puberty has been dropping dramatically over the last few decades, and it's now somewhat common for a girl to reach menarche between ages 8 through 10. Soy has been strongly tied to early puberty in females and males.[4] Not only is the amount of soy a young girl eats a contributing factor, the soy the mother consumes during pregnancy can also influence puberty age. Pregnant women should limit their intake of soy products, and soy-based formulas should never be used.

Xenoestrogens are substances similar or identical to estrogen that are not produced by the body. They may be inhaled, absorbed through the skin, injected, or eaten. Because of their similarity to estrogen, xenoestrogens interfere with normal hormonal balance. They have been tied to many kinds of cancer,[5] particularly ovarian and breast cancer.[6] Soy is loaded with xenoestrogens, something that should raise caution in the health industry.

Is All Soy Bad for You?

This post is not meant to demonize all forms of soy, but merely to provide education on the highly-processed, non-organic (genetically-modified) soy foods, like soy milk and tofu. Fermented soy is an extremely nutrient-dense food that is safe for the body. The fermentation process produces major changes in soy's structure and removes most of the food’s goitrogens (thyroid-harming substances). Any harmful residual effects are mitigated by the fact that fermented soy foods are almost always eaten in small quantities.

How to Avoid Soy

Soy is found in the majority of processed and prepackaged foods, often hidden in flavor enhancers (MSG) and preservatives. Being a subsidized food crop, soy is incredibly cheap and is used to make stabilizers, appearance enhancers, and emulsifiers. The majority of soy is also genetically modified, so if the soy you’re eating isn’t organic, chances are you are eating a Frankenfood product. If you’re seeking to protect your reproductive, mental, and overall health, I highly recommend reducing, if not eliminating, most forms of soy from your diet.