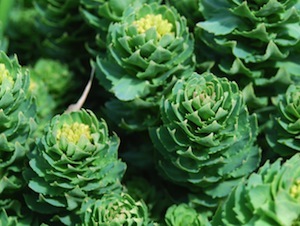 Life has its ups and its downs, and no one is immune from the mental effects of challenging times. Fortunately, whether you're feeling down, anxious, or just wish to maintain a steady mood, natural approaches do exist. Getting adequate sleep and a balanced diet are fundamental, and exercise also offers dramatic results. [1] [2] Meditation, another stress-relieving and mind-balancing tool, can hone focus and may even slow age-related thinning of the frontal cortex. [3] Additionally, some plants and herbs, like Rhodiola rosea, offer bioactive chemicals that support the nutritional charge for mental vitality.

To put it simply, the available data suggests that Rhodiola rosea can help support a balanced, uplifted mood. [4] In 2008, researchers at UCLA confirmed that Rhodiola is one of several herbs with the ability to subdue anxiety. [5] A fairly recent, randomized, double-blind, placebo-controlled study evaluated Rhodiola rosea on mood imbalance and found it not only led to improvements in mood, but it also seemed to positively affect sleep quality. [6] These results have been noticed by many, and some have even suggested that Rhodiola may have potential to psychiatric drugs. [7]

Do you ever feel stressed? If so, you may want to review the results of this 2010 study, one that pitted stress against the supportive effects of Rhodiola rosea: Study participants who had complained of stress-related symptoms noted improvement within days of beginning a Rhodiola rosea supplementation regimen. Progress continued throughout the duration of the study and no serious side effects were reported. [8]

Perhaps one of the most interesting qualities of Rhodiola rosea is that it appears to alter perception, even to the point of impacting physical performance. While this sounds like a bad thing, it can actually pose positive benefits for human health. Research conducted by Gettysburg College found that persons who supplemented with Rhodiola rosea were able to complete strenuous exercises with less effort than when they had not taken the supplement. The effect was believed to be caused by an alteration of the participants' perception on their individual effort. [11]

While Rhodiola is by no means a cure for Parkinson's disease, Rhodiola rosea has grabbed the attention of those interested in supportive therapies for the disorder. Researchers at the Russian Academy of Medical Sciences evaluated a multi-herb preparation that included Rhodiola rosea and reported that — following supplementation — antioxidant levels, immune function, and hormone levels were in normal proportions. Despite the research being preliminary, the finding is certainly an exciting and positive step for the potential future management of Parkinson's disease. [12]

Whether you're experiencing brain fog, suffering from stress, or just wish to sharpen your focus, it's clear that Rhodiola rosea is an herbal remedy you may want to consider. The research shows it's an effective adaptogen with a track record of supporting cognitive outlets and mood. It's also important to remember that mental health concerns shouldn't be self diagnosed. If you believe you're clinically depressed or otherwise severely imbalanced, it's best to seek out a trusted healthcare advisor. Never stop taking any prescribed medications without first talking to your prescribing physician.