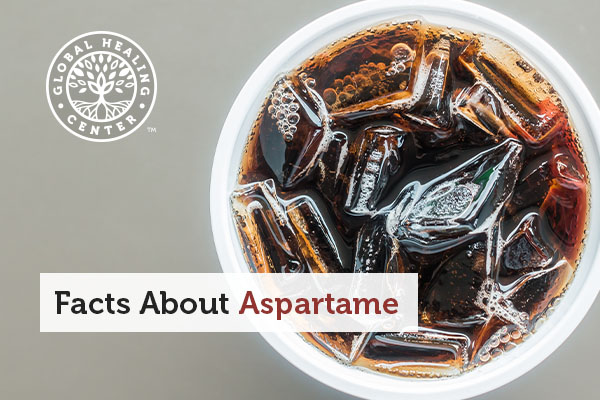 Aspartame is a nasty chemical that's sold as a zero-calorie healthy sweetener. But did you know that it's technically not calorie-free? Not a lot, only about 4 calories per gram. [1] That isn't a lot, and it's not a big deal. But it's one weird fact you probably didn't know about aspartame. Let's take a look at a few other points about aspartame that rarely get discussed.

1. Aspartame is Made from Bacteria Poop

The chemical aspartame is made from the waste product of E. coli bacteria. To be blunt, it's made from bacteria poop. As if that's not bad enough, the poop is then benzylated and hydrolyzed, and the result of that process is then methylated and debenzylated. [2]

Are your eyes crossed from trying to make sense of that? I thought it was bad enough to know that aspartame is really bacterial poop that's been put through a harsh chemical process to a fare-thee-well, but then I learned something even worse. Read on.

2. The Bacteria are Genetically Modified

The patent for aspartame reveals that the E. coli bacteria are genetically manipulated. [2] That's another way of saying that aspartame is made from the poop of bacteria that are genetically modified organisms – GMOs. Of course, the manufacturer claims that there are no GMO molecules in aspartame. I'm not betting my health on that claim! Apparently, they're saying that genetically modified bacteria produce normal poop. However, by definition, any GMO organism's metabolism is deranged because it contains foreign DNA.

Well... maybe not so much after learning it's made from bacteria poop. But, technically speaking, making you hungry is precisely what aspartame does. The science isn't clear on the exact mechanism that causes this but research suggests that when you eat or drink foods that contain aspartame, you'll have a hard time controlling your appetite. That's a strange sort of diet food! [3]

Aspartame itself doesn't get through your digestive tract. It's quickly broken down into other substances which enter the blood stream. These substances are metabolized further and one of those products is formaldehyde, [4] the stuff used to embalm dead bodies. As if being a poison wasn't bad enough, it's known to cause pneumonia and increase the rate of infections, and can lead to death — and that was known as far back as 1905. [5]

I'll let the words of the scientists speak for themselves. According to Dr. Adrian Gross, an FDA Toxicologist:

"They [G.D. Searle] lied and they didn’t submit the real nature of their observations because, had they done that, it is more than likely that a great number of these studies would have been rejected simply for adequacy. What Searle did, they took great pains to camouflage these shortcomings of the study. As I say, filter and just present to the FDA what they wished the FDA to know, and they did other terrible things for instance animals would develop tumors while they were under study. Well they would remove these tumors from the animals." [6]

"Even following the track you did, it seems to me you have only confounded the issue by a series of studies most of which have severe design deficiencies or obvious lack of expertise in animal management. Because of these twin factors, all the careful and detailed examination of fetuses, all the writing, summarization and resummarization is of little avail because of the shaky foundation." [6]

To summarize, FDA investigators were against the approval of aspartame, largely based on the developer's junk science, but the FDA went ahead and approved it anyway. Doesn't your confidence in the FDA increase exponentially when you see dereliction like this?

The Bottom Line on Aspartame

Aspartame is made from bacteria poop, and the bacteria that poop it out are genetically modified. It makes you hungry, so you want more food. It turns into a poison in your body, and FDA scientists spoke out strongly against its approval, though the FDA ignored them and put it out on the market.

What else do you need to know to stay away from foods with aspartame in them?