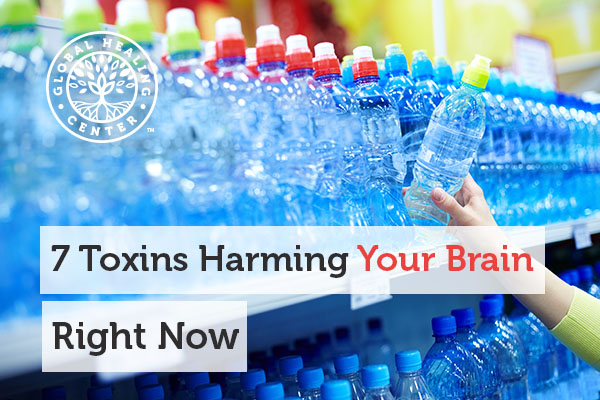 Some of the most common substances found in everyday life are harming our cognitive function right now. Along with pesticides, you have substances like BPA, phthalates, mercury, lead, benzene, and flame retardants that are affecting you, even if you don’t realize it. Hidden in your home and office, you are exposed to toxic chemicals on a daily basis, and your brain is taking the brunt of it.

Your brain controls every aspect of your body, giving directions to cells and the nervous system. It is essential for supporting good mood and clear thinking, helping to improve your overall quality of life. Here are seven of the most harmful and pervasive toxins you should look out for in order to support brain health.

BPA is a known endocrine disruptor that interferes with how your body regulates hormones. Not only does it affect reproductive health, but it can also affect brain function, learning abilities, and how your memory works. [1] And it’s not just plastic that contains BPA; items that are BPA free aren’t always much better. The substitutes used for BPA (Bisphenol F and S or “BPF” and “BPS”) have been linked to behavioral issues, as well. [2]

Phthalates are present in more everyday things than you might think. Similarly to BPA, phthalates are found in many products that contain plastic and things like household cleaners, cosmetics, personal hygiene products, and even food. There is a wide variety of phthalates, but the most notable versions are BBzP (butyl benzyl phthalate), DnBP (dibutyl phthalate), and DEHB (di-2-ethyl hexyl phthalate).

Phthalates have been linked to ADHD, asthma, diabetes, neurodevelopmental concerns, and more. [3] California is spearheading the move against phthalates by asking that four specific types must be listed on labels (many do not have to be listed at all). Even big corporations like Target and WalMart have promised to reduce the amount of or even eradicate the use of harmful toxins like phthalates in products they stock.

I’ve covered the dangers of mercury extensively in other articles. The base reason is that it has been linked to kidney concerns, respiratory failure, and other neuromuscular complications; however, the elemental form of mercury is the most toxic. [4] Due to this knowledge, many people have switched off from thermometers and other products containing mercury.

Lead poisoning isn’t a concern of yesterday, it’s a concern today – a huge concern. The biggest issue is that lead affects so many parts of the body in such harmful ways. Not only can it affect organs and tissues, but it can affect whole systems of the body like the digestive, reproductive, and nervous systems. You absolutely need to take conscious steps to reduce your exposure to lead, including making your home safer for your children.

Benzene is found in fuel and motor vehicle exhaust, but can also be found in detergents and pharmaceuticals. [5] Why is something so problematic used so frequently? Benzene is even classified as carcinogen, [6] it’s highly flammable, and benzene poisoning can pass from mother to fetus. The best way to reduce your exposure to benzene is to distance yourself from gasoline or waste plants and to avoid cigarette smoke at all costs. As quoted by the CDC, “Average smokers take in about 10 times more benzene than nonsmokers each day.” [7] Just one more reason not to smoke!

Normally, something that helps to quell a fire is heralded as useful and sometimes heroic. However, a disturbing discovery was made by a researcher from Texas. The discovery showed that flame retardants were found in the breast milk of American women. [8] How could this happen? It turns out that flame retardants can be found virtually anywhere in food, furniture, and building materials. We’re around these items every day and breathe in the toxins that emanate throughout the day.

Attributed to the spread of human civilization, it’s unbelievable just how widespread traces of flame retardant chemicals are. Not even bald eagles are safe. Out of 33 dead eagles tested from 2009 to 2011, every one but two had all four flame retardant components for which scientists were testing. [9] It’s important to educate yourself about flame retardant compounds and make sure they’re not abundant in your home. [10]

Mostly everyone is familiar with the negative effects of pesticides, but new developments further strengthen the argument against using pesticides on foods we consume. Perhaps the biggest and most shocking development to come to light is that pesticide exposure is now linked to Parkinson’s disease. [11] The best way to avoid undue exposure to pesticides is to choose organic food!

Now that you’re a bit more informed about seven toxins you might not have known about before, you can get started on protecting yourself from the harmful effects, both short term and long term. Turmeric shows powerful antioxidant protection for the brain, and it’s often advised to take this in extract form to ensure best results. Eating an organic diet, reducing the use of furniture made with flame retardants, and using glass containers instead of plastic are also helpful steps.