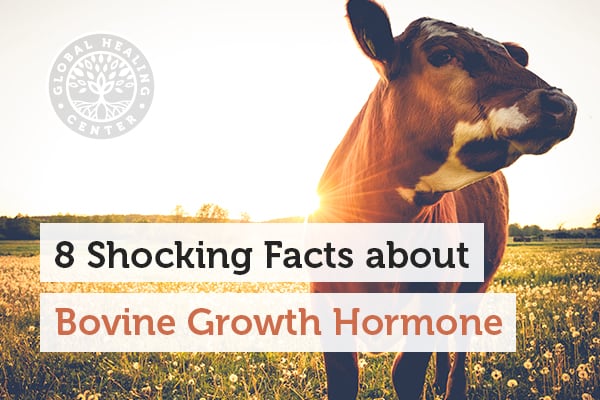 Since bovine growth hormone received FDA approval in 1993, three disturbing health trends have emerged. Cancer cases continue to increase, obesity has become an epidemic and early onset puberty has become the norm. [1] [2] [3] Related? Maybe, maybe not. You can be the judge as you read through the following 8 facts about the substance known as BGH, or rBGH. Whatever conclusion you arrive at, you'll probably agree that keeping this substance far away from you and your family is good practice.

1. Bovine Growth Hormone is a GMO

2. It's Banned in the European Union and Around the World

Originally approved by many countries shortly after its release, rBGH has since been banned by the European Union, Canada, Australia, Japan, New Zealand and Israel. [4] Most of these bans went into effect in 2000, some earlier. It didn’t take their scientists long to figure out this stuff isn’t quite right.

3. Medical Experts Have Declared it Unsafe

In 2007, Dr. Samuel Epstein exposed the dangers of rBGH in his book What’s in your Milk?. This book reveals the science, politics, and corporate greed behind the creation and approval of rBGH. [5] Since then, many milk producers have decided to sell only rBGH-free milk; and Monsanto sold its rBGH business unit to Eli Lilly. [6] But don’t be fooled, it’s still out there and likely to remain out there and in the food supply until a full ban is established.

5. Links to Various Types of Cancer

Insulin like growth factor has a multitude of concerns. A recently published scientific review focused on the relation of IGF-1 (and IGF-2) to breast cancer tumor formation. These insulin growth factors are known to stimulate cell differentiation. It appears IGFs have a unique interaction with estrogen which may contribute to tumor development in women. [8]

A 2013 study evaluated the relation of IFG and prostate cancer. Little if any IGF was observed in healthy prostate tissue. Advanced tumors demonstrated a high presence of IGF-1, while smaller localized prostate cancer tumors showed a lesser density of IGF-1. Ultimately the study concluded higher concentrations of IGF-1 do have a correlation to the presence of prostate cancer. [9]

Like prostate cancer, advanced colorectal cancers have shown a direct relationship with higher levels of IGF-1. One particular study demonstrated higher levels in men, patients over 60 and those with cancers stemming from damage to the mucus layer of the colon. The researchers determined IGF-1 levels can indicate and help identify the presence of colorectal cancers. [10]

6. Linked to Lung Cancer Too?

Although not one of the original cancers linked to insulin like growth factor, recent research from China has found that IGF-1 plays a significant role in non-small cell lung cancer. Lung cancer patients in this study had much higher blood serum levels of IGF-1 than the control group. [11] While this study is relatively new, it does suggest IGF-1 may play a larger role in cancers than previously thought. It also raises additional concerns and questions about the role of increased consumption of IGF as a result of genetically modified cows.

7. Diabetes as a Result of BGH?

A 33 year-old man found himself in the ER reporting a range of symptoms including nausea, headaches, blurry vision, and more. In the course of the examination, the patient admitted taking anabolic steroids –- which included bovine growth hormone. (Apparently bodybuilders know something more about the effect of bovine growth hormone on humans than government and corporate researchers!) As a result of the use, he began a new life with diabetes. [12]

While this is a very unique case, it does show that bovine growth hormone, whether introduced via milk (which we’ve been told it won’t be) or through other means can have serious effects on human health.

8. Other Side Effects: Milk Contamination, Mastitis, and Antibiotics

Cows given rBGH are more likely to develop mastitis, an inflammation and infection of mammary tissue. Early studies found this led to bacteria and potential pus in milk. While laws prohibit distribution of contaminated milk, the simple fact is that milk from cows treated with rBGH are more likely to suffer contamination than others. This concern was one of the reasons the European Union and other countries banned it. [4]

rBGH also causes a wide range of health concerns for cows, requiring the use of antibiotics. Fortunately, most producers label their milk, so it is easy to find non-rBGH/rBST milk. Of course, the easiest way is to buy organic or raw. Better yet – choose organic goat's milk.