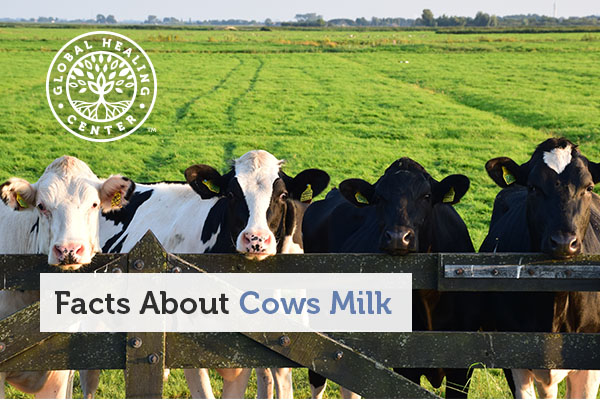 Cow’s milk has been a nutritious, dietary staple for children and adults for ages. Today, we're witnessing an increase in the frequency of cow's milk allergies and it's fueling a debate between proponents of pasteurized milk and raw milk. Whichever side you’re on, research continues to investigate the reasons for an apparent increase in cow milk allergies, the safety and nutrition of raw milk, dangers of milk consumption and healthy alternatives for children who cannot drink milk. Let's take a look at 10 shocking facts about cow's milk.

1. Maternal Antibiotic Use is Linked to Cow Milk Allergy (CMA)

A 2013 study out of Finland looked at the connection between a mother's antibiotic use and its impact on infants. Reviewing data from national records, infants diagnosed with CMA had a direct association with mothers who had taken antibiotics during pregnancy. Infants that were given antibiotics following birth also showed a greater tendency to the cow milk allergy. [1]

With the increases in childhood allergies, including CMA, research has begun to explore the relationship between maternal diets and its effect on human milk in breastfeeding mothers. Infants of mothers who consume cow's milk show higher levels of specific proteins known to increase immune response and lead to allergy development. The good news is that mothers who restricted cow milk consumption reduced the chance of their infants developing a cow milk allergy. [2]

The arguments for raw organic milk are loud and plentiful. Although some remain skeptical, the science is quickly changing minds. A study published just this year discovered that organic milk contains 62% more omega 3 fatty acids than conventional milk. [3]

4. Milk From "Factory" Cows Can Be Highly Suspect

Many big corporations keep cows in filthy conditions. Some may even pump them full of hormones (rBGH) to stimulate milk production. A concern side effect of this practice is mastitis or the infection of mammary tissue – the tissue which produces milk. This can lead to milk contamination by pus and bacteria. One bacteria is Methicillin-resistant staphylococci (MRS). This antibiotic-resistant bacteria has proven extremely virulent and difficult to control. [4] E. coli is another bacteria readily found in cow’s milk, and one resistant to powerful antibiotics like streptomycin and tetracycline. [5]

Children with CMA raised on lactose-free formulas or milk-free diets have been observed having concerns with developing proper bone mass. A Polish study of 66 children with CMA examined the impacts of lactose-free formulas on nutrition and bone health. The lactose-free children had similar nutritional levels of calcium, phosphorus, sodium and magnesium. But, they had higher vitamin D deficiencies and lower levels of the chemical markers needed for bone formation. [6] Based on this study, any child raised on a lactose-free diet should be monitored to ensure adequate nutritional and medical care.

Cows are often given antibiotics to treat the diseases they develop, especially cows that have been loaded with growth hormone (rBGH). Although many strains have become resistant to antibiotics, they remain a first step in addressing infections. To make sure antibiotic residues remain within approved levels, researchers continue to develop new ways to detect these antibiotics. [7] Of course, this means with every glass of milk you’re getting cow antibiotics unless you purchase raw or organic... or even better – goat's milk.

Cow's milk allergies is a hot topic of study in Poland. Another polish study explored the effect of raw milk on allergy and asthma in Polish children and adults from a rural town. The researchers observed that raw milk consumption led to a lower occurrence of asthma and allergies, although hay fever and chronic nasal congestion occurred less frequently in the non-farmers who consumed raw milk. [8] These results support the hypothesis early exposure to raw milk offers protective effects against allergies and other autoimmune related diseases.

Raw-milk advocates argue raw milk is more nutritious and promotes health much better than its pasteurized counterpart. Whether this is true or not, science has shown raw milk retains nutrients destroyed by pasteurization. Pasteurization has been found to reduce levels of B1, B2, B12, folate and vitamin E. [9]

Until then children (and adults) had consumed raw milk for millennia. Many obviously survived, however with consideration to cleanliness the number who did not as a result of raw milk provided from unclean sources, or that had gone bad is unknown.

A text called The Untold Story of Milk, by Ron Schmid, provides extensive detail into the safety and nutrition of raw milk, particularly in the chapter "The Safety of Raw vs. Pasteurized Milk." [10]

Of course, while the anti-raw milk group will argue raw milk is unsafe the facts remain simple:

10. Cow's Milk May Be a Cancer Danger to Some

Hormone sensitive cancers such as breast or prostate cancer can be influenced by phytoestrogens. Cow’s milk contains these hormonal substances. Researchers sought to identify whether the amount of estrogens could be influenced by the dietary sources of cows. The outcome showed the estrogens were present regardless of the cow’s diet. [11]

A 26 year study of 68,000 women supports this idea. Women, especially post-menopausal women, with greater dairy intake over the period of the study had higher rates of endometrial cancer. [12] This 2012 publication suggests the health value of cow milk should be considered on a more individualized basis. Because contrary to the dairy industry’s marketing line, "Milk does your body good’" milk may not be an ideal food for everyone and many are seeking out alternatives.