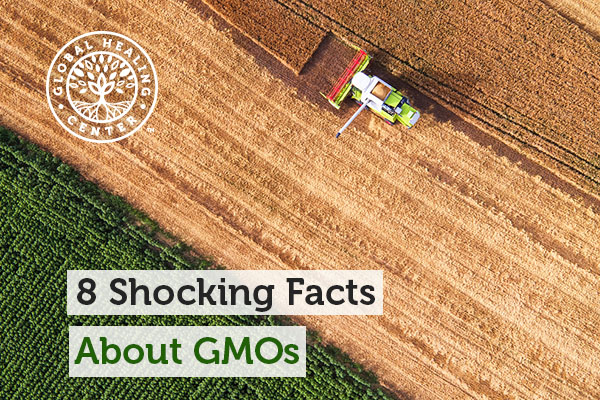 Finding food that has not been genetically modified can be tricky. Unfortunately, the companies that produce GMOs have sold the public a box of rocks with the notion that GMOs are the answer to nature’s mistakes, namely pests, disease, and the natural spoiling process. Despite the aggressive approach exerted by large corporate agricultural bodies, research continues to mount against GMO crops.

8 GMO Facts You Should Know

Genetically-modified organisms have infiltrated today’s food supply, yet short-term animal findings suggest negative impacts on multiple organs. If that's not bad enough, long-term studies of GMO food on human health have yet to be conducted. Here are the other shocking facts about GMOs you may not know.

Since 1990 when genetically-­engineered food crops began flooding the market, field testing across the United States has reached a frightening, almost incomprehensible scale. The USDA loosely enforces non-stringent rules for biotech companies engaged in test planting. Thousands of known safety breaches over the decades have ensued, with generally nothing more than a warning or small fine imposed on offenders. Most testing is done with no oversight and in secret, as evidenced by investigative reporting. Perhaps the most shocking fact is that there are only 130 GMO safety inspectors for all 50 states, or barely 2 inspectors per state! How can only two people monitor an entire state for GMO safety? The answer: they can’t. [1]

2. GMO Producers Own the Government

Monsanto is a multinational corporation, massive enough to make sure government regulations fall in their favor. This isn’t a gray area; this is a hard fact. Ukraine and Eastern Europe, laden with rich black topsoil Big Agri is hungry for, may just be the jewel in the crown of Monsanto's worldwide conquests. Documents from Wikileaks discovered that the US state department was pushing for loans to the Ukraine so Monsanto could grab land and begin producing GMOs. Previously, laws banning GMOs have now been cracked thanks to strong US lobbying along with a massive $17 BILLION loan from the IMF­ World Bank in late 2013. [2] A recent political tug-­of-­war victory in Kauai requiring more extensive disclosure and accountability from corporations proliferating GMO crops onto the market and land has now been struck down as unlawful by a duplicitous federal judge. [3] Could it be that this decision was influenced by top GMO organizations?

3. The Battle for GMO Labeling Has Gotten Ugly

As the public increasingly rallies to demand GMO labeling requirements nationwide, megalithic and deep­-pocketed biotech corporations and their lobbies have been successfully buying off politicians and judges and are crushing dissent. Should citizens have the right to know if their food contains GMO or has been contaminated? Who decides? [4]

4. GMO Scientists Want to Mess With Your Coffee

For the first time in agricultural history, science has given way to completely unlocking (sequencing) the complex genome of the hallowed coffee plant. With this new found knowledge, researchers plan to genetically manipulate coffee varieties in various ways. The coffee plant may be altered to adjust caffeine content, adapt to climate change and pests' debilitating effects. [5] The health, consumption safety, and viability of one of the worlds most cherished drinks hangs in the balance.

5. China is the Leading Glyphosate Producer and GMO Soy Importer

That sounds great, it's China's concern, right? Wrong. The fact that nearly every product in this country comes from China means it's logistically an extension of us. GMO experts and industry leaders representing a dozen nations met in Beijing recently to educate and strengthen alliances against nightmarish GMO/glyphosate pesticide policy trends. With China being the largest glyphosate producer and GMO soy importer in the world, this could signal an important turn of the tide. [6]

6. Monsanto Wants to Take Over India

Despite Indian Parliamentary rejection of GMO mainstay crops (such as rice) being sold or taking root in their country, more than a dozen influential MPs were receiving red carpet treatment and accommodation from Monsanto to influence GMO policy in India. Conflict of interest much?

8. US and Canada Use Deceptive Approaches to Invade GMO-Free EU

US and Canadian food and biotech corporations, with the support of their respective governments, attempt to subvert existing stringent rules in the European Union under the guise of the Transatlantic Trade Treaty (TIPP). If successful, this would shield these corporations from public scrutiny and transparency as well as limit, if not eliminate, public legal recourse.

The best, most effective way to avoid GMOs is to purchase organic. This isn’t just limited to food, because even personal care products may contain genetically-modified ingredients. Purchasing organic also lets industry know how important the GMO issue is to consumers, and you are essentially voting with your pocketbook every time you buy organic products.