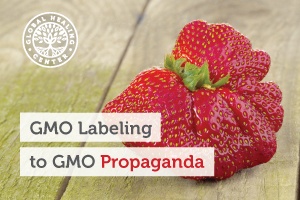 This past March, the Senate rejected a GMO-friendly bill that would’ve made clear GMO labeling optional for food producers and manufacturers. The bill, S. 2609, would’ve made GMO labeling a voluntary practice and prevented individual states from enacting their own legislation governing GMO labeling practices within their boundaries. This legislation does not reflect popular opinion, as about 90% of Americans support mandatory GMO labeling.[1] As if that's not enough, there’s something else in this bill that's even more shocking. Had this bill passed, the Federal Government would have appropriated millions of our tax dollars to funding propaganda campaigns to convince the general public that genetically modified foods are good for us. As you can imagine, major GMO offenders like Monsanto would have loved to see this come to fruition.

One of the leading arguments against mandatory GMO labeling is that it would significantly increase the cost of food production. Some of the nation’s largest food companies protest mandatory GMO labeling because they claim that the costs would be staggering. Meanwhile, Monsanto alone has already contributed nearly $300,000 to the campaigns of federal candidates this year. In fact, in 2014, Monsanto donated over $525,000 to candidates[2, 3] and close to $2 million to various trade and industry groups.[4] Adding words like “GMO Product” to food labels would cost a fraction of these efforts. It brings to light the fact that the opposition to this particular legislation is not about money at all.

This week, a new bill is making its way to the House Appropriations Committee that may still provide $3 million of taxpayer money to launch these misleading campaigns. It is being dubbed the “Monsanto Promotion Act”. How could this possibly happen?

In March 2013, President Obama signed into law a spending bill which provided the budget for several Cabinet Departments. There was, however, public outcry over a portion of this act. Section 735, known as the Farmer Assurance Provision led many of the bill’s critics to refer to it as the “Monsanto Protection Act”. Within this section, federal courts were stripped of their ability to halt the planting or sale of genetically modified or genetically engineered seeds. This portion of the act was completely irrelevant to the bill’s actual purpose, which was to help establish the federal budget.

Fast forward three years. In addition to the Senate’s failed voluntary GMO labeling bill, Congress is entertaining new legislation that would appropriate $3 million for “consumer outreach” campaigns. These campaigns are designed to “promote understanding and acceptance of agricultural biotechnology-derived food products and animal feed…” Monsanto has a history of spreading GMO propaganda, but not with the help of the Federal government. It is standard practice for Congress to push for Appropriations legislation around this time of year, but do you want your tax dollars being spent on the promotion of genetically modified food?

GMOs are organisms that have had foreign genes implanted into their genetic code. These foreign genes can come from other species of plants and sometimes even animals.[5] Such genetic modification has been going on with our food since the 1990s.[6] Two decades later, the majority of American adults still view GMO foods as “generally unsafe” and there has yet to be conclusive research that can sway popular opinion.[7] Despite a lack of solid evidence, major food producers are still pushing their version of the facts about GMOs to the American public.

In recent years, the American public has been choosing healthier foods.[8] This often means avoiding GMO foods and ingredients. Clearly, the major food producers responsible for genetically modified food feel threatened. There have been several attempts to pass some form of DARK Act (Denying Americans the Right to Know) that would prevent the implementation of mandatory GMO labeling. Companies like Monsanto, however, are not ready to give up.

With the recent defeat of Senate bill S. 2609, GMO proponents are taking a new approach. If food manufacturers are going to be required to clearly label GMO products, then they have to convince the general public that GMO foods are safe. That’s the point of this new, federally-funded propaganda. If this bill passes, we as taxpayers will be paying for misleading campaigns designed to convince us that genetically modified foods are good for us, although studies indicate otherwise.[9, 10, 11, 12, 13] Don’t take this lying down.

What Can We Do?

Remember, our elected officials are in office to represent us. Let Congress know how you feel about your tax dollars going toward GMO-friendly campaigns. By standing together, we were able to prevent voluntary GMO labeling, but there is more to be done. Contact your Senators and your Representatives and tell them not to pass this legislation. Together, we will overcome the threat that genetically modified food poses to our health.