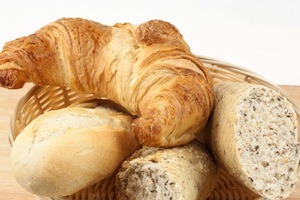 Gluten sensitivities and gluten intolerance are on the rise, making gluten a very popular topic. Because it's a subject with many facets, here are 9 facts for you to consider to make a sound, rational decision as to whether you should monitor, or possibly eliminate gluten from your diet.

…a naturally occurring protein composite found primarily in wheat, rye and barley, as well as some types of oats. Gluten consists of gliadin and glutenin. Gliadin is one of the proteins that forms gluten. Doctors will test for anti-gliadin antibodies if celiac disease or gluten hypersensitivity is suspected.[1] In celiac patients, the gliadin triggers immune response. Glutenin is the other protein comprising gluten. From a dietary view, gluten has only recently entered the human diet; it gives bread elasticity and strength. [2]

Fact #2: Not All Grains Contain Gluten

Corn, rice and certain types of oats do not contain gluten. These grains do not typically provoke a response in individuals with celiac disease or with gluten sensitivity.

...is a false statement. Researchers have determined that in many cases the human mouth contains symbiotic bacteria colonies that help break down gluten.[3] Whether these bacteria have developed in the mouth, or have become prevalent because gluten has become part of the modern western diet still remains a point of conversation.

Fact #5: Celiac Disease is an Allergy

Celiac disease is an allergy to gluten. Individuals suffering from celiac disease produce an intestinal immune response when gluten has been consumed. This response includes intestinal redness. The inability to absorb nutrients can occur, as well as weakening of the intestinal wall.

For those with celiac disease, gluten does much more than create bloating, diarrhea and other unpleasant intestinal symptoms. Gluten can inhibit nutrient absorption. It can also get into the blood stream and create more serious concerns such as bone loss or concerns with bone mineral density, impaired hearing, dermatitis herpetiformis (a serious rash, though unrelated to herpes, despite its name), and potentially damaging effects to the brain. [5] [6] [7] [8] [9]

Children can experience a range of concerns related to gluten consumption. Those born with a gluten allergy (celiac disease) have obvious complications; however, doctors are finding more and more children expressing symptoms of gluten sensitivity and other gastrointestinal illnesses. [10] This suggests that gluten sensitivity can develop quickly. When a sensitivity like this arises in the youth population, consideration should be taken in terms of dietary sources, in particular, its inclusion in processed food.

Fact #8: Gluten is a Concern Around the World

While gluten sensitivity reflects concerns with the modern ‘Western’ diet and food processing practices, gluten sensitivity affects people worldwide. However, the solution is worldwide as well. From Australia to the United States and everywhere in between, the gluten-free industry has grown quickly to meet the needs of gluten sensitive individuals. [11]

Fact #9: You Can Eliminate Gluten from Your Diet

For anyone looking to avoid or eliminate gluten from the diet, the key is knowing what to avoid and what to eat. Part of that challenge is knowing the range of names of products that contain gluten. To eliminate gluten, avoid products containing barley rye, triticale (a cross of rye and wheat), wheat and wheat products such as bulgur, durum flour, farina, graham flour, kamut, semolina, and spelt.

Of course this goes for any foods using any of these products, such as breads, cakes, pastas, etc… and it also includes many sauces, soups, and even processed meats where gluten is used to add flavor. It can take a little effort to get started, but once you know what to look for, it is easy. To get started with gluten free foods, I recommend looking to natural fruits and vegetables, fresh eggs, meats and seafood, and grains like rice, buckwheat and flax.