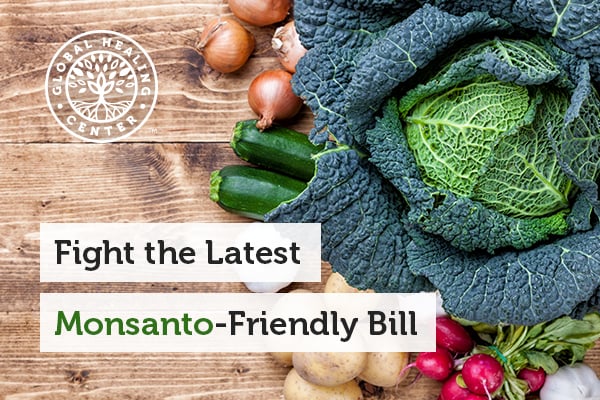 On Friday, February 19, Senator Pat Roberts (R-KS) introduced a new bill to the Senate proposing to amend the Agricultural Marketing Act of 1946. Roberts’ proposed legislation recommends that the Senate “amend the Agricultural Marketing Act of 1946 to require the Secretary of Agriculture to establish a national voluntary labeling standard for bioengineered foods, and for other purposes.” You can read the full bill here.

Who & What:
Senator Pat Roberts wants to pass a bill that would prevent GMO labeling this Thursday, February 25, 2016.

Why It's Important:
GMO food producers won't have to tell you what's in your food.

The bill is being rushed through the Senate as a response to a law passed in the state of Vermont in 2014. The Vermont law would require all genetically modified food manufacturers to clearly label their food products and is slated to go into effect on July 1st. Rather than comply with this law or any others that individual states may pass in the near future, major pro-GMO organizations like Monsanto and the Grocery Manufacturers Association have funded lobbyists and pressured legislators to pass a federal law circumventing these state-level decisions.

And this is your chance to fight back!

Pat Roberts proposed bill directly undermines the right of individual states to govern their own food labeling requirements. Roberts suggests that “...no State or political subdivision of a State may directly or indirectly establish under any authority or continue in effect as to any food in interstate commerce any requirement for a food that is the subject of the bioengineered food labeling standard under this section that is not identical to that voluntary standard.” This means that genetically-modified foods manufacturers and distributors will be off the hook in terms of clearly disclosing what is really in their products.

Adding insult to injury, Roberts’ bill also includes an “educational” component. This section suggests a national campaign providing “science-based information, including any information on the environmental, nutritional, economic, and humanitarian benefits of agricultural biotechnology, through education, outreach, and promotion to address consumer acceptance of agricultural biotechnology.” That means that not only do these GMO food producers not have to tell you what’s in your food, but they will be invited to lie to you about it directly! It’s also worth mentioning that this campaign would be led by federal agencies, meaning that it will likely be financed by your tax dollars.

Interestingly enough, Roberts uses the term bioengineered food in his own bill. This is clearly just another way of saying “genetically modified food”. And that’s because the American public has already begun to understand the danger of genetically modified, or GMO, foods. Let’s take a deeper look at what this harmful phrase actually means.

What Is Genetically-Modified Food?

Genetically-modified foods are defined as meeting 2 criteria in the bill put forth by Roberts. It refers to food:

“(A) that contains genetic material that has been modified through in vitro recombinant deoxyribonucleic acid (DNA) techniques; and
“(B) for which the modification could not otherwise be obtained through conventional breeding or found in nature.”

Think about that for one moment. Genetically modified food has had its own DNA tampered with, and these modifications cannot be achieved through breeding. On top of that, the changes result in something that cannot be found in nature. What are we really talking about here? The body relies on the nutrition we provide it to function properly, but how can we ever do that if we have no idea what is in our foods?

Join Our Stand Against Genetically-Modified Foods

While the parties behind GMO foods, like Monsanto, continue to pour millions into their efforts to pressure politicians like Senator Roberts to pass such harmful legislation, you can still make your voice heard. Please add your name to the Organic Consumers Association’s petition to let your local legislators know that you want no part of this Monsanto-friendly movement!

Remember, this is not the first time that members of our federal government have tried to keep us in the dark about GMO foods. I have personally traveled to Washington, D.C. to rally against Monsanto and their ongoing efforts to eliminate our right to understanding what we feed ourselves. Do not let this happen! Senator Roberts’ bill is slated to be marked up on Thursday, February 25, by the Senate Agriculture, Nutrition & Forestry Committee. Sign the petition today and make your voice heard. Let your representatives know that we will not be kept in the dark!