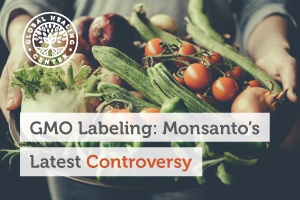 In 2014, the state of Vermont passed a progressive GMO labeling law that would require GMO foods producers to clearly identify all genetically modified food products. This legislation extends to any “food produced with genetic engineering” and is slated to go into effect on July 1st, 2016 - mere days from now. GMO labeling has been a testy issue for many, and no one has fought harder against this than Monsanto.

By now you’ve probably heard about the controversial agriculture company. You might be familiar with Monsanto’s early days as a chemical manufacturer but today they are better known for their controversial transition into the GMO foods industry. What many people never see, however, is how active this company is behind the scenes. The main voice in the controversial debate over the legality of GMO foods, Monsanto has spent millions on political lobbying to combat federally-required GMO labeling.[1] Today, we’re going to recap a hot-button legislative issue that has been the focus of Monsanto’s attention for the last few years.

Just last year, the House of Representatives passed a bill, H.R. 1599, that was known as the “Safe and Accurate Food Labeling Act of 2015.” You’ve probably heard of it referred to as the DARK Act, short for the oft-used moniker, “Denying Americans the Right to Know.” Monsanto and other GMO foods manufacturers were thrilled to see this bill pass in the House because, were it to have become federal law, the Vermont GMO labeling bill and any similar state-level legislation would become nullified.

H.R. 1599 simply put into law that GMO labeling would be voluntary, not required. The bill also held a clause stating that no states would have the authority to pass their own legislation requiring GMO labeling, therefore rendering the Vermont GMO labeling legislation invalid. Furthermore, this bill actually allocated millions of dollars in federal funding for government-sponsored GMO propaganda campaigns, which were designed to encourage a broader acceptance of GMO foods among the general public. As it stands now, over 90% of Americans have said that they favor mandatory GMO labeling[2] and over 80% have said they would avoid purchasing GMOs were they labeled.[3] Clearly, GMO foods are far from widely accepted in this country, much to the chagrin of major producers like Monsanto. Requiring these companies to clearly label their products as containing GMOs would surely lead to a drastic loss in revenue.

While Americans have expressed concerns about GMOs, Vermont was the first state to step up and take serious action. Of course, big food corporations ramped up their federal lobbying efforts to get around the new requirements. And that’s what the DARK Act is all about. Fortunately, the federal DARK Act was blocked in the Senate, but the debate over mandatory GMO labeling is far from over.

With Vermont’s law set to go into effect so soon, it may appear that federal intervention is out of the question. Unfortunately, that is not the case. At the time this article was published, members of Congress were actually debating when they would take a recess for the extended Independence Day holiday. This extended holiday would mean that Congress would not be meeting at all until several days after the Vermont GMO labeling law's July 1 deadline. However, while the law does establish this date as the deadline when GMO food products must be labeled, there is also a 6-month grace period intended to enable manufacturers and producers transition into compliance. During this period, you can expect last ditch efforts from companies like Monsanto to lobby for federal regulation that circumvents the Vermont law. This is where you can help.

Vote With Your Dollars

Part of the reason the GMO movement carries so much clout is because the companies behind it have so much financial power. Americans buy these products, often without even realizing it. You can expect to see continued lobbying efforts from GMO producers but we, as a country, are close to overcoming them. Remember, the Senate version of the DARK Act was blocked just months ago. By voting with your dollars, you send a message. Make your voice heard by refusing to purchase genetically modified food. Remember, without your support, GMO manufacturers do not have the ability to continue fighting for legislation that would prevent them from having to label GMO food products.