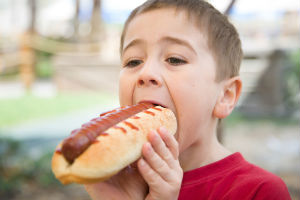 Consuming Hot Dogs Can Be Harmful to Your Health

Multiple studies have determined that consumption of hot dogs can be a risk factor for childhood cancer.

Peters et al studied the relationship between the intake of certain foods and the risk of leukemia in children from birth to age 10 in Los Angeles County between 1980 and 1987. The study found that children who ate more than twelve hot dogs per month had nine times the normal risk of developing childhood leukemia. [1]

Bunin et al also found that children of mothers who consumed hot dogs during pregnancy had an increased risk of childhood brain tumors. [3]

How Do Hot Dogs Cause Cancer?

Most hot dogs contain preservatives called nitrites. During the cooking process, nitrites combine with amines naturally present in meat to form carcinogenic N-nitroso compounds. It is also suspected that nitrites combine with amines in the human stomach to form N-nitroso compounds. These compounds are carcinogens and have been associated with cancer of the oral cavity, bladder, esophagus, stomach, and brain. [4]

What About Vegetables That Contain Nitrites?

It is true that nitrites are commonly found in many green vegetables, especially spinach, celery, and green lettuce. However, the consumption of vegetables appears to be effective in reducing the risk of cancer. How is this possible? The explanation lies in the formation of N-nitroso compounds from nitrites and amines. Nitrite containing vegetables also have vitamins C and D, which help inhibit the formation of N-nitroso compounds.

What Other Foods Contain Nitrites?

Do ALL Hot Dogs Increase the Risk for Childhood Cancer?

Not all hot dogs contain nitrites. Nitrite-free hot dogs, while they taste the same as nitrite hot dogs, have a brownish color that has limited their popularity among consumers. Although I don't recommend processed meat of any sort, between the two, nitrite-free hot dogs are better than their counterpart.

Do not buy hot dogs that contain nitrites. Additionally, if your children eat lunch at school, contact the school and find out if they're being served nitrite hot dogs in the cafeteria, request that they use only nitrite-free hot dogs. Or, better yet, discourage the use of processed meat entirely.