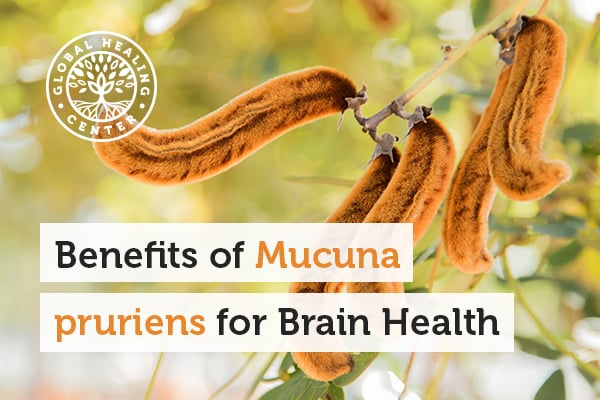 Long before chemicals, labs, and appointed health authorities, natural plants and practical knowledge formed the foundation for medicine. Indian Ayurvedic medicine, one of the oldest holistic medical modalities, cataloged the therapeutic properties for thousands of plants. While pharmaceutical marketing might make us wonder how we ever survived without prescription drugs, ancient knowledge has made its way back into the conversation. More than ever before, research is beginning to focus on ancient plants, herbs, flowers, and roots.

Mucuna pruriens, a tropical legume also known as velvet bean, has been used by ancient healers and is making waves in the scientific community. Ayurvedic herbal medicine has relied on Mucuna pruriens since 1500 BC to support ailments such as snakebite, intestinal disorders, sexual response, and melancholy mood.

What are the Active Compounds in Mucuna pruriens?

The magic of every therapeutic plant resides in its beneficial, bioactive compounds. The interaction between these compounds is typically responsible for the plant's favorable effects. In Mucuna pruriens, levodopa, or L-dopa, is one of these compounds.[1, 2] This bioactive phytochemical is a precursor to several neurotransmitters, including adrenaline, noradrenaline, and dopamine.

Mucuna pruriens has significant antioxidant action that works in tandem with L-dopa to promote brain health.[3] When L-dopa crosses the blood-brain barrier, it helps to increase brain levels of dopamine, an essential neurotransmitter associated with regulating mood and cognition.[4] Antioxidants are helpful for defending against oxidative damage by free radicals.[5]

Mucuna pruriens protects the brain by keeping cognitive and neural functions in check, even encouraging neural activity.[6] Its antioxidant action is likely responsible. The mechanism behind this is simple — all free radicals have an unpaired electron that makes them unstable in the body. Antioxidants donate an electron to the free radical to neutralize its effects, particularly on the brain. Mucuna has an added benefit in that it fights systemic redness in the brain, which is often a factor in brain degradation.[7]

Does Mucuna pruriens Counteract the Effects of Stress?

Is a Therapy for Parkinson's Disease on the Horizon?

Parkinson's disease is partially characterized by decreased brain production of dopamine, an essential neurotransmitter. Because Mucuna pruriens positively influences dopamine levels, it's been an Ayurvedic therapy for centuries. Preliminary research indicates that the natural form of L-dopa in Mucuna pruriens provides equivalent or better results compared to synthetic levodopa; and without the common side effects of nausea, vomiting, and involuntary muscle movement.[9, 10] Now, should it be inferred that Mucuna pruriens is a cure or treatment for Parkinson's? Not in the least. Is this study interesting in a hopeful sense though? Absolutely.

Mucuna pruriens has a rich history of use for promoting mental health. Current research supports its traditional application. If you are considering supplementing with Mucuna pruriens, like any supplement, it's a good idea to find an organic or wildcrafted source.

Mucuna is available in supplement form either by itself or combined with other herbs. I personally recommend NeuroFuzion™, a potent blend of the best botanicals for brain health. NeuroFuzion also contains zinc and lithium orotate, two minerals shown to promote a positive mood.